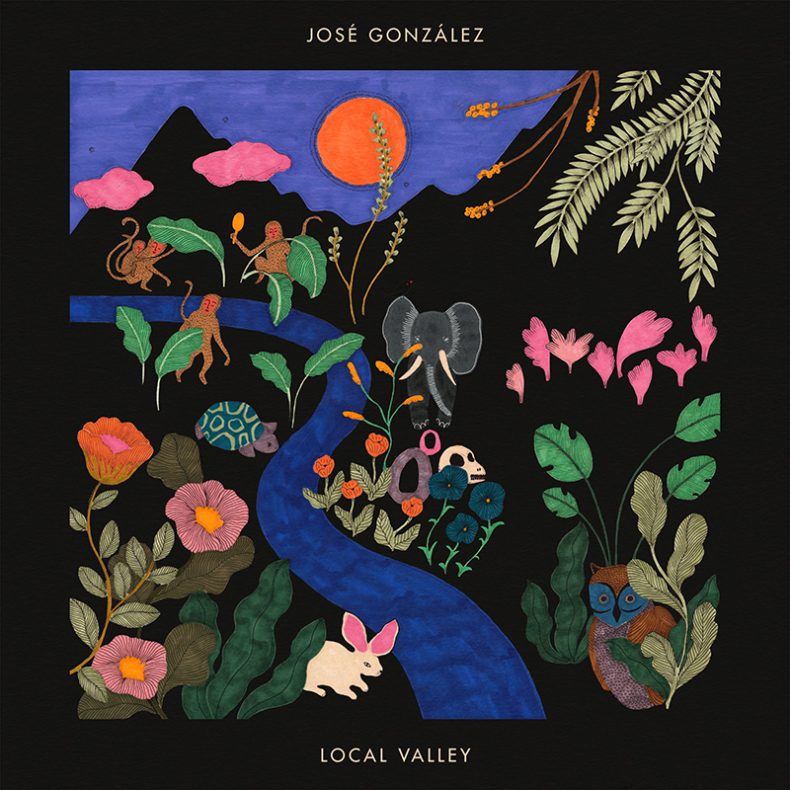 Visionary singer-songwriter-guitarist José González has announced the release of his eagerly awaited fourth solo studio album. LOCAL VALLEY will arrive via Mute on September 17. González’s first new studio recording in more than five years will be available via both black and colored vinyl, CD, and digital platforms. LOCAL VALLEY is preceded by today’s premiere of the album’s first single, “Visions,” available now at all DSPs and streaming services.

All album pre-orders will include registration for upcoming tour dates currently planned for later this year. Pre-order HERE.

Fans around the world can see González perform later this month as it was recently announced that he will participate in National Geographic’s Earth Day celebration taking place on April 21.

Of “Visions,” González says, “We are the apes that are starting to understand the universe and our place in it. We are changing our surroundings in an exceedingly rapid pace, so much that we’re becoming stewards of our planet whether we like it or not. As Stewart Brand said, ‘We are as gods and we have to get good at it.’ The lyrics came to me in early February 2020 just as there were more and more tweets about the possible pandemic. The topic of the song felt very timely. You can hear the birds and ambient sounds from the veranda, along with a layer of synth loops in the background.”

Recorded at Studio Koltrast Hakefjorden, which González set up in his family’s summer house north of Gothenburg, LOCAL VALLEY “is similar to my other solo albums in sound and spirit,” he says, “a natural continuation of the styles I’ve been adding through the years both solo and with Junip. I set out to write songs in the same vein as my old ones: short, melodic and rhythmical, a mixture of classic folk singer songwriting and songs with influences from Latin America and Africa. It’s more outward looking than my earlier works, but no less personal. On the contrary, I feel more comfortable than ever saying that this album reflects me and my thoughts right now.”

On LOCAL VALLEY – which follows the 2015 release of González’s acclaimed VESTIGES & CLAWS – he sings in three languages (English, Spanish and Swedish) and it provides a welcome reminder of the Gothenburg, Sweden-based artist’s understated appeal and singular ability to communicate discreetly. These 13 thought-provoking, meticulously crafted songs sound as characteristically confident and rich in compelling detail as anything in his prior canon. Much like renowned physicist Brian Cox, whose Human Universe afforded a key source of insight, Gonzalez addresses substantial affairs in an accessible manner suited to his music’s apparently ingenuous nature. Indeed, the artist is well placed to delve into complex themes: when not making music or taking care of his daughter, he’s busy investigating topics like effective altruism, secular humanism, and eco-modernism.

“Many of these songs have a crystal-clear, secular humanist agenda: anti-dogma, pro-reason,” González says. “There’s no political agenda, though, at least not in a classical left-right spectrum. Maybe in a globalist-secular vs. theocratic-nationalist way: the focus is on underlying worldviews, and on our existential questions as smart apes on a quest to understand ourselves and our place in the cosmos.”

LOCAL VALLEY was first heralded last month by the first single, “El Invento,” available now at all DSPs and streaming services. González’s only publicly released song to feature lyrics in Spanish, for which he credits his young daughter with helping him during the writing process, “El Invento” is joined by an official music video streaming now at YouTube. Watch HERE.

“El Invento” – which was first debuted by González during a special live performance as part of the 2020 Nobel Prize Award Ceremonies – was met by immediate critical applause upon its arrival, with Paste writing, “The song asks questions of creation and purpose against a gentle Spanish guitar as the video offers a sweet glimpse into simple, domestic life,” adding, “The music video for ‘El Invento’ features the song’s lyrics in both Spanish and English, making it easy to enjoy the profound lyrical work of González in either language.” “El Invento” “is a quiet and truly pretty piece of music,” wrote Stereogum. “González’s multi-tracked voice sounds as beautiful as ever, and other than a fluttery finger picked guitar and a soft metronomic beat, it’s all we hear on the song.” “When the world feels particularly intense and anxiety-ridden right now,” declared Far Out, “González breaking his six-year silence with ‘El Invento’ is an appreciated gift that we should all indulge ourselves in.”

Hailed by Rolling Stone as “someone whose subtle, carefully crafted music delivers rewards to listeners who know how to wait,” José González’s stellar career can only be described as a dream. His classic interpretation of The Knife’s “Heartbeats” provided the son of Argentinean parents with a jumpstart that has since tallied more than 1B streams, over 150 licensed TV, film, and videogame uses, and a major presence on radio stations around the globe. He has won a range of honors, performed on high-profile network television shows, headlined prestigious festivals, sold out concert venues on virtually all continents, and collaborated with Ben Stiller on an inventive film soundtrack. González’s warm, intimate voice and tender harmonies, underlined by a dexterously plucked Spanish guitar and muted percussion, deliver profoundly thoughtful lyrics largely revolving around ideas of civilization, humanism, and solidarity. A sincere, artful performer whose singular approach to songwriting and sonics sets him worlds apart, José González is in a class by himself.

by David Lacroix on October 6, 2020
MUSIC GONE LOCO A CONVERSATION WITH MARTIN MOSCROP & DONALD JOHNSON OF A CERTAIN RATIO 40 years into their career, with a recent [...]
9.0

by Ljubinko Zivkovic on April 17, 2020
Mick Harvey Waves Of ANZAC/The Journey Mute Mick Harvey has proven so far that he is an artist that is bound to surprise you, and in practically all cases, pleasantly. Not [...]
8.0

by Michael Mitchell on August 30, 2019
Cabaret Voltaire 1974-76 Mute Anyone in love with classic electronic and/or industrial music will no doubt know Cabaret Voltaire. This may be a side that casual fans of the band may have [...]
9.0

by Michael Mitchell on August 30, 2019
Cabaret Voltaire Chance Versus Causality Mute Cabaret Voltaire fans rejoice! You get two releases in one day (this plus a re-issue for the first time on vinyl of early [...]