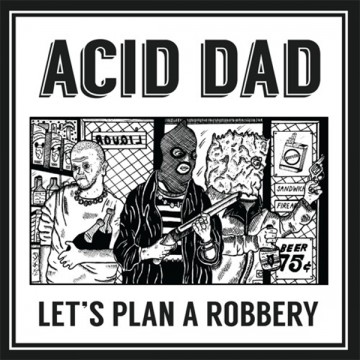 Brooklyn, NY’s Acid Dad will release their debut EP, Let’s Plan A Robbery, on February 26th, 2016. It will also be released as a limited edition cassette tape via Knife Tapes, which can be pre-ordered here.

Let’s Plan A Robbery is a magnetic four-song EP self-recorded by the band in upstate New York throughout December 2015 and January 2016. Expanding upon their previous singles, the EP ranges from the explosive drive of opener “Don’t Get Taken” to the psych-sway of “Fool’s Gold”; from the dynamic charge of “Digger (Gotta Get That Money)” to the languid, hypnotic closer “Shoot You Down,” with guitarists Vaughn Hunt or Danny Gomez handling lead vocals on every other track. Cover artwork can be seen below.

Acid Dad – which recently sold-out a hometown show at Baby’s All Right – will head out on a lengthy U.S. tour in late February, beginning with a stretch of dates with White Reaper that kick off on the 28th in Chattanooga, TN. The band’s tour dates will continue through April 21st in Chicago, IL, and include an April 8th show in Los Angeles, CA. Acid Dad are also confirmed to perform on The Special Without Brett Davis in Brooklyn, NY on February 24th, as well as festivals including SXSW, the Savannah Stopover, Treefort Music Fest, and Canadian Music Week. A current itinerary is below.