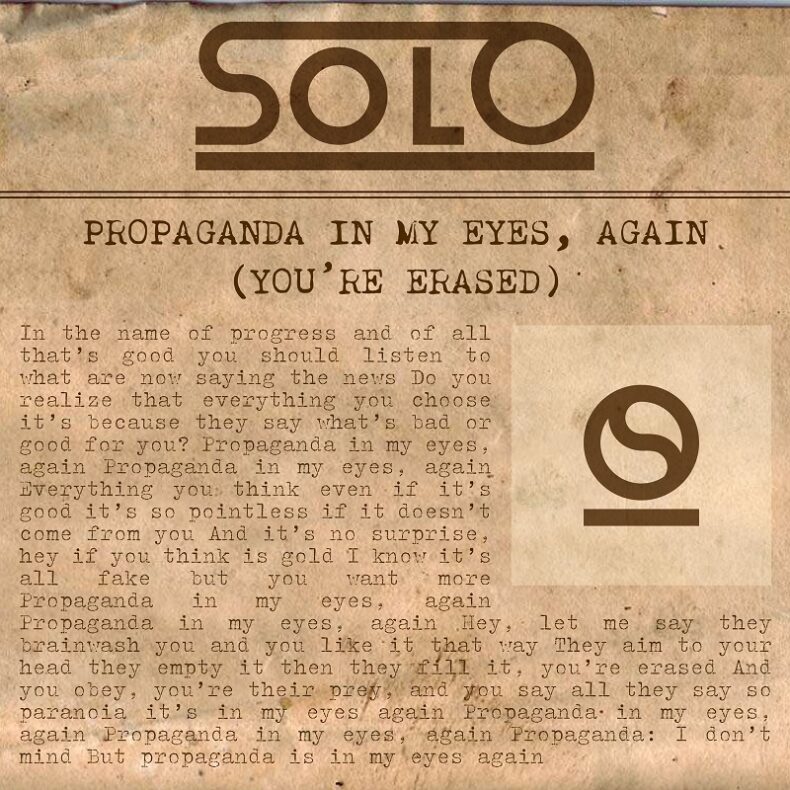 It is a song that points the finger at the consumerist system and how our society pushes us towards factional hatred in order to be able to control us more easily, making us passive consumers.

New song, new change of course for SOLO who, after having touched the elektronische musik with “Stati emozionali” passing through the psychedelic rock of “Don’t shoot the piano player (it’s all in your head)” and the indie pop of “Something (you don’t need)”, returns with a song of pure primitive grunge fury: “Propaganda in my eyes, again (you’re erased).”

When I wrote “Propaganda in my eyes, again (you’re erased)” I had in mind the Nirvana of “Bleach”, a dirty and violent album, directly inspired by the sound and style of Mudhoney, essential and direct “Propaganda in my eyes, again (you’re erased)”, in fact, unlike the other songs on SOLO, it’s bare-bones, without too many overdubs: guitar, bass and drums. (If you don’t consider a little “experiment” on the tail of the song)

In the songs published up to now I had experimented a lot in the studio, overdubbing dozens and dozens of tracks, to create sound carpets and counterpoints between the instruments. For “Propaganda in my eyes, again (you’re erased)”, given the nature of the piece, something more essential was needed. The only overdub I allowed myself was the bass. There are 3 superimposed, each treated differently: one clean, one passed into a Soul Food, the other into a Big Muff. In short, the Electro Harmonix has given me a great hand. At the end of the song, however, there is a double drum “solo” (two overdubbed drums, one of which is distorted, an idea by Edo ardo Di Vietri, who in his Hexagonlab Studio gives me a hand with the mixes)».

The song, initially born for another SOLO project, the M.i.B., has evolved over time, also and above all thanks to the contribution of drummer David Garofalo.

My initial idea was to create a more cadenced song, with a halved and pounding, repetitive rhythm, more aimed at some grunge productions. Having delivered the tracks to David, I explained my idea to him but, once back in his studio, I found myself in front of a song of pure punk fury: devastating! I’m very glad he didn’t listen to my directions, because he managed to bring out a unique energy, turning it into a wild pogo track!

“Propaganda in my eyes, again (you’re erased)” , as the title suggests, is a song that points the finger a tpropaganda, of any kind, both when it is overt and when it is disguised as good intentions; tha tpropaganda that pushes us towards factional hatred without giving us the opportunity to question ourselves about what we believe we believe and,above all, what those who we perceive as our antagonists believe they believe “Divide et impera”. Even today, well into the 20s, we are subject to regime propaganda. Not a political regime, but an economic one. The system has once again prompted us to divide into two factions, this time represented by “sovereignists”and “progressives”. The problem is that often, and on both sides, we limit ourselves to repeating concepts without really understanding them deeply, without being able to place them within a broader discourse, without understanding that, even when something seems right, it is not said that it is in the application that is proposed to us from above: anti-immigrant propaganda/a priori justification of any immigration policy; theories that deny climate change/disposable ecology in favor of capital; populist economic policies/hatred towards low socio-economics helping policies;racism-sexism/blind acceptance of any inclusive facade initiative; etc… etc…Everything becomes just trend; all appearance, zero substance: we rant about things( until it’s the topic of the day) that we know nothing about, because no one bothers to investigate them; and no one is really interested in talking about it, except out of narcissism, to underline their presence to others, in the failed and embarrassing attempt to rise above the others, strengthened by the support of those who sharet heir own other-directed thoughts. The only thing that matters is to attack the other faction, with hatred, with a total lack of empathy. “Peace, love, empathy”, wrote Kurt Cobain: we still have to work on it. We are unable to understand the motivations behind the gestures of others, however vile and uncivilized they may seem to us, or however exaggerated and distant from the reality in which we live, and this is the scariest thing. We are unable to understand that the choices we are convinced we are making independently are, in reality, influenced by messages conveyed. And ,meanwhile, the “class struggle” is no longer vertical, people against bosses, but horizontal: people against people. The aim is to divide us and make us weaker, psychologically, emotionally, in order to transform us into perfect passive consumers: a sad and depressed person is more likely to compulsive purchase.

Written by SOLO and directed by Walter Di Belloat the Martincana bar, and performed by the bartender Fabio Cusati, the videoclip of”Propaganda in my eyes, again (you’re erased)” incorporates the same concepts expressed in the song, but in new shape.

i am very fascinated by the world of cooking and, therefore, also of bartending. For the video of “Propaganda in my eyes, again (you’re erased)” I imagined society as an excellent bartender, who knows how to mix the right amount of impulses to serve to the masses in order to be able to subjugate them more easily. I invented fake drink brands giving them precise names, all of which refer to certain attitudes that we are driven to assume or sensations that we are made to perceive. And so, the JOINUS consists of You are nothing, We are strong, Lack of empathy and Hate ’em!, while the WHAT WE SAY IS JUST from You are smart, They’re ignorant, Lack of empathy and Hate ’em !. Finally, the BUY IT!, a cocktail for everyone, is made up of Be blind, Don’t think and Trust us:  CHEERS!

“Propaganda in my eyes, again (you’re erased)”anticipates the release of the album “The importance Of Words (Songs Of Love, Anti-Capitalism and Mental Illness)”, due out in 2023.