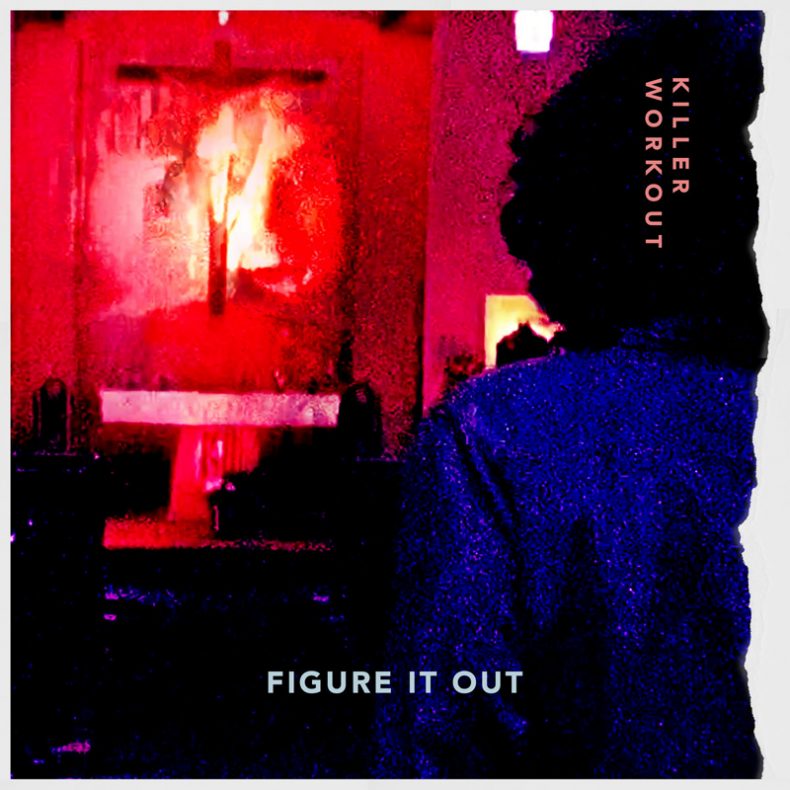 KILLER WORKOUT – “FIGURE IT OUT”

Killer Workout is a Seattle band, but sonically connected to an era of the city in which people danced themselves wet, and raw, and high. Combining the arch disco-rock of 70s icons with poppier post-punk bands in the new wave era and adding the resonant dynamics of more recent funk-fueled dance-floor groups, Killer Workout have invented their own style of Exploitation Rock.

Taking their name from “a kooky 80s slasher movie” that keyboardist and vocalist Anthony Darnell was a fan of, which was set in an aerobics studio and featuring a killer using a giant safety pin as a weapon, Killer Workout is just as shiny and shocking. The fiery and frenzied Adrienne Clark, also on keys with backing vocals, joins in like Darnell’s mad slasher twin as they crisply funk it up live, with perfectly one-the-one drums from Bob Husak (The Blakes) beneath Reed Griffin’s sonorous guitar and Jon Swihart’s perfectly tempestuous bass.

Their new EP Four : Three features three maniacally inspired videos, “because the aspect ratio of TVs in the 80s and 90s was 4:3,” Darnell explains. “It’s the square box. If you’re watching a VHS, most likely it’s in 4:3 aspect ratio.” He found the video maker “video_macabro” from his work on Instagram, who did mostly compilations of weird horror and sci-fi movies like the kind the band loved — “they have an eerie, dream-like quality.” He reached out to collaborate and the project, based on creative and creepy B movie inspiration, came together and full circle.

“Too Late,” “Figure It Out,” and “Loser” make up the magnanimous, epic soundtrack quality of the release’s sound, following up an EP and compilation of tracks from the past couple of years. Produced by Conor Sisk (Kilcid Band, New Faces) at Rainshadow Recording, it literally sounds like a timeless game-changer from the 80s like the LP ’Speaking in Tongues’ or esoteric UK band The Sound mixed with the chiming modern pop of Local Natives or confident art-funk-beat of Fruit Juice. These are songs you can lose yourself in, all the live power captured for unrestrained use at home or digging as you watch the transgressive video art as well.

Explaining each track, Darnell says, “With ‘Too Late,’ I was trying to do a HAIM and Kate Bush hybrid thing. I really love the song “Hounds of Love” by Kate Bush and I was trying to go for something that had that kind of vibe, with that nice driving piano line. Lyrically, it’s about letting go of someone you love who doesn’t seem to care that the relationship is ending.

“With ‘Figure It Out’ we came up with the bass and drum part pack in 2016, and though I loved how it sounded, the band wasn’t into it at the time,” he says. “I came back to it a year later with a verse and chorus that better matched the drum and bass. It has a Simple Minds feel to it — that kind of feeling. Lyrically, it’s about feeling out of place, but so does everyone else, so chill out.”

These feisty, angsty new anthems are a focused evolution from the band’s beginnings as The West, a few years back. The name change matched where the band wanted to go musically. “Beyond being way too hard to search for on the Internet, it became clear that we wanted to take our sound in a new direction,” Clark says. “When we decided to rebrand, we took a long time to come up with a new name, but finally it became clear that the answer was right in front of us. It’s a great movie with a great original soundtrack, so we thought, ‘why not?’”

Killer Workout has performed regularly at Emerald City venues like The Crocodile, Neumos, and The Sunset Tavern in Seattle, as well as many regional and national venues, including SXSW. Reality is changing fast now but their sound is as invigorating as their music is insistent on making you move, so get into a Killer Workout and get ready to shake and jump like you’re throwing off the world.

The song developed over a long time. About three years ago, we came up with the bass and drum part, but couldn’t come up with a vocal line to go over it. We kept trying for something anthemic and nothing would fit. So, we let the song go and moved on to other things.

I was listening to some of our old demos and I ran across that bass and drum part. I thought that something a little straighter and not flashy would work over the song and that’s how the vocal parts developed on the track.

Lyrically, it’s about not fitting in and kinda being angry about that, but then realizing that everyone is just like you.  You finally, “figure it out.”