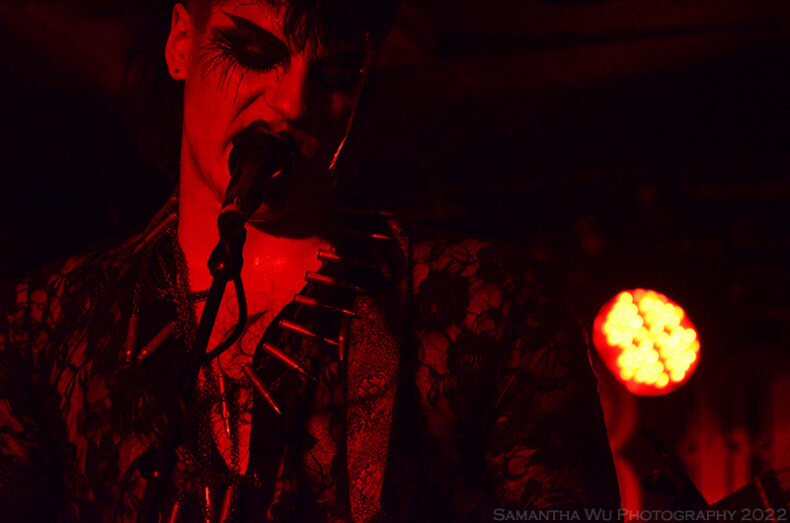 He’s known as Goth Dad on TikTok and Instagram, offering macabre-tinged dad jokes and nuggets of fatherly advice to all the baby bats out there. He’s actually Dusty Gannon – guitarist, songwriter, and lead of Athens, GA-based goth rock band Vision Video, that made its Canadian debut at the Hard Luck Bar tonight.

Vision Video – comprised of Jason Fusco on drums, Emily Fredock on keyboard and vocals, Dan Geller on bass, with Gannon taking the lead – take musical influences from the likes of Siouxsie and the Banshees, The Cure, and Depeche Mode, giving them their distinct New Wave sound. It was this draw that drove the crowd of dedicated local goths to the show.

With two albums under their belt – including Inked in Red released last year and Haunted Hours released last month – Vision Video’s set featured selections from both albums and a couple of additional covers for fun.

Throughout the performance, Gannon took the time to speak to the crowd about his unique past that includes 15 years serving in the US Army, with a two year stint in Kandahar, and working as a firefighter and paramedic during the pandemic. It was these lived experiences that inspired the songs “Kandahar” about his time in service, and “Death in a Hallway” about watching patients die in hospital hallways during the pandemic as there weren’t enough doctors or nurses around to care of them. It makes sense that Vision Video’s music would come with strong political opinions to which Gannon spoke passionately about, a sentiment proudly echoed back by the crowd.

Watching Gannon perform with Fredock is great as their vocals paired quite well in particular during “Beautiful Day to Die”. As well, seeing Fredock get to let loose during their cover of Siouxsie and the Banshees’ “Monitor” was a lot of fun. Gannon is also very charismatic and personable, and is able to connect with the crowd right from the start. Vision Video’s Canadian debut was definitely well received by the Toronto crowd.

Samantha is both a writer and a fan of the arts and has been able to find numerous ways to pair the two. Eager to dive head first into writing for Spill, Samantha is an avid partaker and reviewer of live art in Toronto serving as an editor at Mooney on Theatre exploring live local theatre, she's a photojournalist for Go Globehopper, a travel, dining and tourism blog that focuses on Toronto and abroad and previously for Lithium Magazine. She's passionate about music, theatre, photography, and writing -- not necessarily in that order. She drinks tea more than coffee, prefers ciders over beers, and sings karaoke way too loudly. You can follow her on various social media including Facebook, Twitter, and Instagram.
RELATED ARTICLES
hard luck barlive reviewtoronto