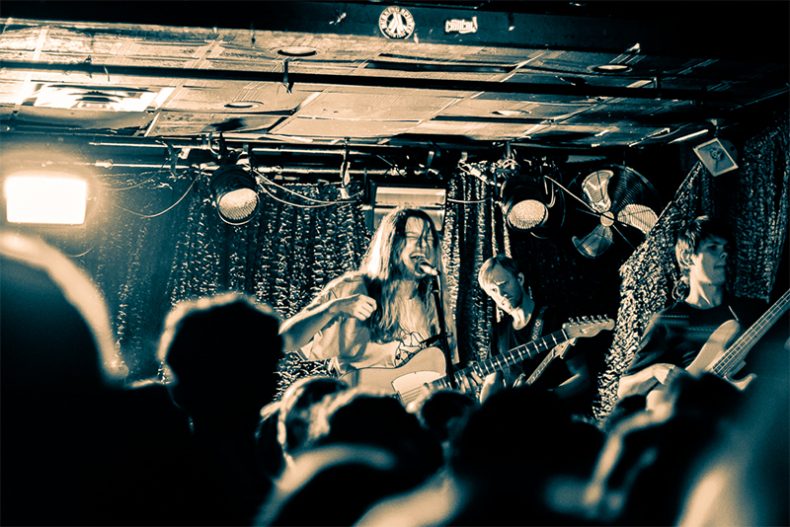 Marie Ulven’s side project, girl in red, is breaking out in huge strides as she stopped by Hard Luck Bar in Toronto tonight in support of her debut album, Beginnings.

As the lights dimmed, a huge scream of excitement rose from the audience, signaling that girl in red was ready to take the stage. As she appeared with her guitar, the audience welcomed her with energy and elation, before she opened the set with “bad idea!” Immediately, the crowd jumps up and down with girl in red as you feel the ground is shaking. “It was a bad idea/Calling you up/Was such a bad idea/I’m totally fucked” the crowd sings unapologetically.

During the breaks between songs, Ulven would have conversations with the crowd. They talked about her tattoos, her mom’s height, her stained shirt, and she chatted with a fellow Norwegian. She is not afraid to talk openly about her life, just like her music. The crowd sang to every song she played, which is not surprising as girl in red’s music is deeply relatable to everyone.

“I don’t care/
I’m feeling down/
I wanna stay home/
Never go outside/
Summer depression comes every year/
I just want to disappear.”

the crowd sings in “summer depression”,just one example of mental health issues that others can relate to in their personal life.

The show comes to a close with the album’s first track, “i wanna be your girlfriend.” Just before the song starts, Ulven invited a girl onstage to dance with her because it was her birthday. She and the crowd passionately sang until she asked the crowd to come closer with their hands up. As the last chorus plays, Ulven jumped up to the many hands as she crowd-surfed. As the song ended, she thanked the crowd.

girl in red’s show had everything: energy, intimacy, and emotion. For any music lovers out there who are into indie music, make sure to catch girl in red next time around.

Andrew is an aspiring photographer hailing from Toronto, who is currently in his final year at OCAD University. Ever since he took pictures with his old iPhone at an Imagine Dragons concert in 2018, it began his goals and dreams to pursue a career to photograph live music, and to work in the music industry. He loves concert photography because it combines his passion for photographing memories and listening to music. His favourite genres of music are pop, electronic, and alternative rock.
RELATED ARTICLES
hard luck barlive reviewtoronto