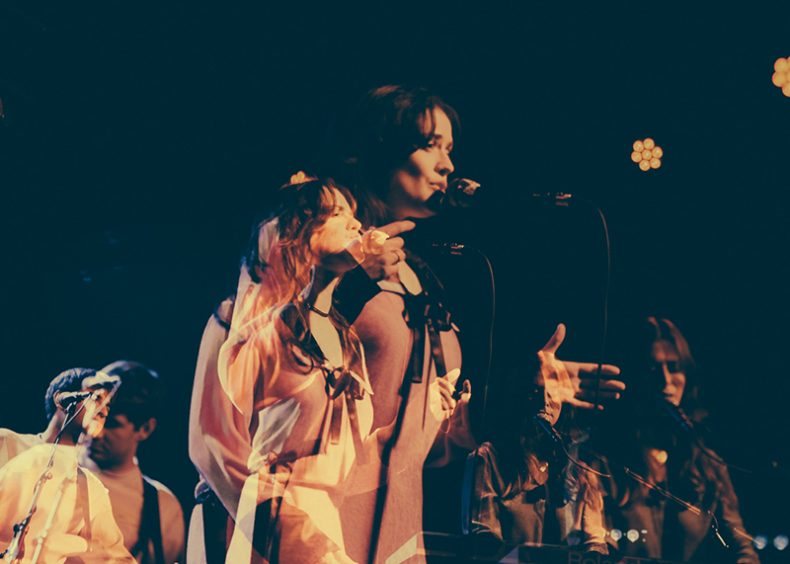 The evening began with a bit of a delay with doors opening later than scheduled as final touches to guests lists were still being made last minute. Keeping in mind this was one of the first shows at Lee’s Palace since the provincial government rule change in which venues were allowed to reopen to full capacity. And this just happened to be a sold out event. Something that headliner Tops I’m sure did not mind at all.

The Montreal indie pop quartet with their dreamy pop vibes were the perfect band for people who were ready to be through with seated shows who just wanted to dance and party again. And once everything was settled at the door and everyone found their spot on the dance floor. Tops opened the set with their 2021 pandemic hangover tune ‘Party Again”.

The first half of the evening’s setlist was largely pulled from the band’s 2020 release I Feel Alive.  Mixing up that album’s track listing for the show, the band included “Ok Fine Whatever” that featured a flute solo by lead singer Jane Penny. Just prior to the song, the crowd asked if the flute had a name. David Carriere (guitarist) replied with “it’s the flute with no name”.

A few nights earlier in New York the band had dressed up in matching Star Trek outfits for Halloween. Tonight also saw a costume debut as Jane Penny let the crowd know how happy she was with her new pink velvet outfit. Penny commented how keyboardist Marta Cikojevic looked like Princess Zelda in hers.

The rest of the show saw the band keep the stage banter to a minimum and a focus on keeping the crowd moving and shaking with sprinkling songs from throughout their catalogue. Including three from their 2014 record Picture You Staring (“Easier Said”, “Superstition Future”, and “Way to Be Loved”), and 2015 singles “Wait” and “The Hollow Sound of the Morning Chimes”.

The band closed the show with “Waiting” and “Easier Said”. It was safe to say this crowd had waited for some time for this show (tickets from 2020 were still honoured) to happen. But once inside, Tops made easy for everyone to have a proper good time.

The Spill Magazine is a Toronto-based online publication dedicated to covering the independent music scene with a strong focus on our thriving hometown talent. Our writers bring you up-to-date news, in-depth features on musicians and reviews for the latest CD releases. We also travel to the front lines for all local festivals including Canadian Music Week and North by Northeast. Don’t forget to check out our Facebook and Twitter pages for all daily Spill updates.
RELATED ARTICLES
lee's palacelive reviewtops