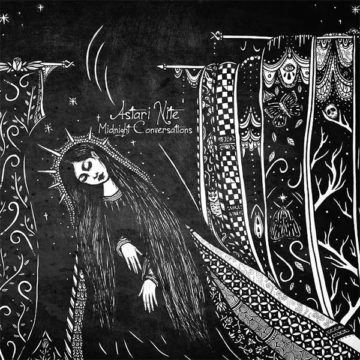 Rock has always had the tendency for nostalgic retrospection and expressing modern concerns in a way that resonates with past musical cultures. This is especially true in recent years, where local music scenes are rife with bands trying to capture the energy of distant eras long past in a way that makes sense today. Unfortunately, many artists have learned the hard way that such a task isn’t as straightforward as it might sound.

Florida’s Astari Nite find themselves facing up to this challenge of making forgotten sounds relevant again on their new full-length debut Midnight Conversations. With a sound harkening back to ‘80s new wave and post-punk, Mychael Ghost and co. breathe contemporary gloom and doom into the synth-fueled beats first brought to life by the likes of Depeche Mode. This is despite the fact that their album art might have led you to expect an homage to folkloric Norwegian black metal.

The record starts strongly with lead singles “Sunday Queen” and “Unfulfilled Promise”, tracks that rely on catchy grooves and dark wobbling bass to ground Mr. Ghost’s best Ian Curtis impressions. As the record keeps turning, Astari Nite shows off their consistency without exploring much range. At times the sole indication that you’re listening to a different track are the synth and delay-based introductions that were clearly only added during the production stage.

At times, the songwriting becomes a little more creative. “Love Sick” and “Rosary Society” allow the band to explore slightly different vibes and are more rhythmically and structurally adventurous than the rest of the tracks, but they only really stand out because of the relative homogeneity of the rest of the record. Retrospectively, it felt like Astari Nite were trying too hard to write a compilation of singles and left the idea of a cohesive album as an afterthought.

That being said, if you listened to the album one track at a time or in a playlist of artists with a similar aesthetic it’d probably be a better experience than the album as a whole itself. Minor flaws like poorly blended transitions, a tendency to rely too much on production and generally hesitant instrumental parts don’t do much to strengthen Midnight Conversations, but they can certainly be forgiven on a small darkwave band’s debut. They’re hardly going to light up the world with their new album, but Astari Nite have given fresh life to a genre often relegated to ‘throwback’ moments and found a niche that has been unfortunately overlooked in recent years.

Based in Montreal but raised across Western Europe, Andrew feels at home both everywhere and nowhere. Having picked up the piano at age four, he has since gone on to add clarinet, saxophone and guitar to his musical arsenal. As well as crafting music, Andrew spends a lot of time listening both at home and in live contexts. Rather than focusing on a particular style or calibre of artist, he is keen to explore music of any shape or size. Outside music, Andrew's passions lie in philosophical writing, visual art and sharing positivity with the world around him.
RELATED ARTICLES
album reviewalbum reviewsastari nite
8.0