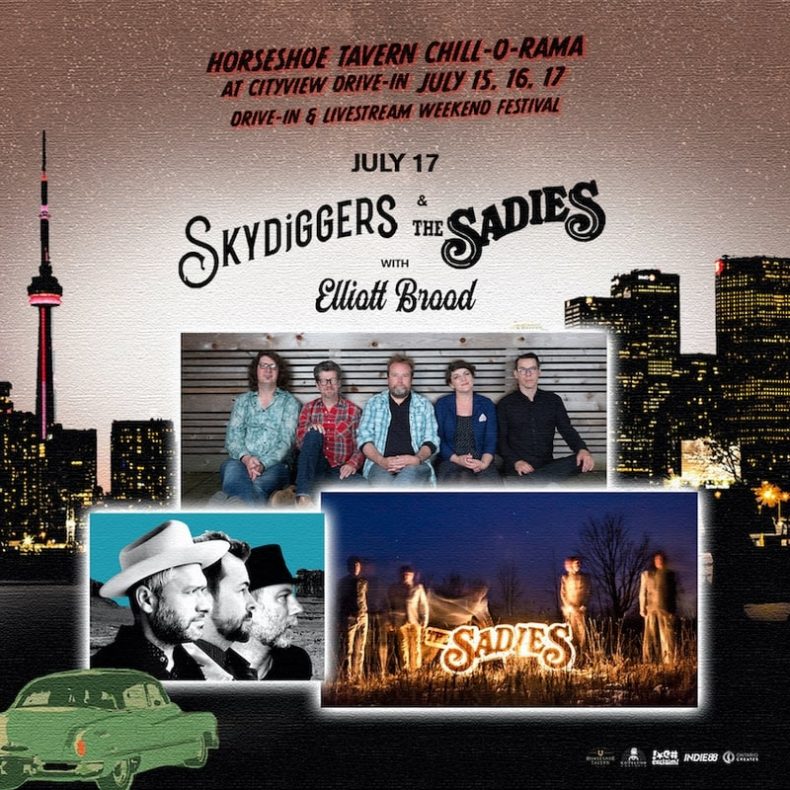 Where does one go on a hot, summer evening in Toronto? Perhaps the drive-in for a triple bill, featuring Elliott Brood, The Sadies, and The Skydiggers. To be fair, this was my first experience of a ‘drive-in concert’, but it was well-organized, and once settled, sitting outside and listening to live music was an absolute dream come true. It was a fantastic evening.

The show served as a fundraiser for The Horseshoe Tavern and a welcome return to live performances. Elliott Brood got the evening started with their rousing set. The three members worked together to produce a fantastic sound of retro rock ‘n’ roll and country. They dipped into most of their albums and even performed a song from their most recent release, the excellent Keeper (“Stay Out”). They performed some of their most popular songs, such as “The Bridge”, and even treated fans to a cover of Uncle Tupelo’s “Whiskey Bottle”. They were in fine form and were the perfect band to open the evening.

Up next was the incredibly energetic The Sadies. Anyone who has seen them live would know what to expect. They hit the stage like a ball of energy, dressed impeccably I might add, and for just over an hour easily glided from one song to the next. It was absolute perfection. These guys were tight and playing off one another. Brothers Dallas and Travis Good trade guitar solos and complement each other perfectly. Touching on several of their albums, The Sadies, while not talking with the audience a great deal, connected with the audience through their music. Each song was met with excessive horn honking and enthusiastic cheers. 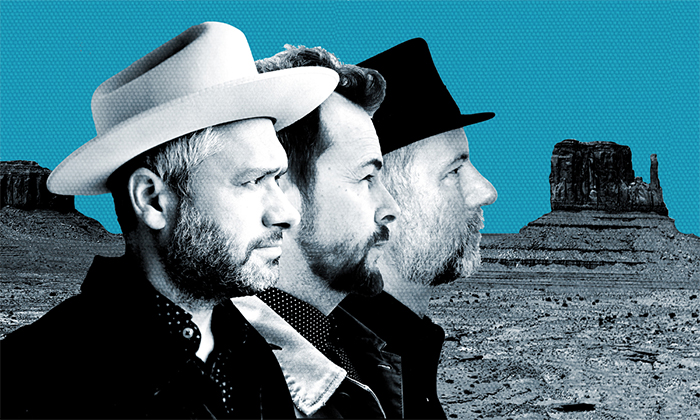 The Sadies have an incredible method in alternating between rockabilly instrumentals and beautifully sung country songs. They opened their set with “The First Five Minutes” and from there sailed easily through 19 more rocking songs. Highlights included “Tell Her What I Said” and “The Good Years”. Dallas’s voice was spot on and one could feel in the performance. Along the way, they were joined by their mother, Margaret Good, on their take of Elvis Presley’s “Wearin’ That Loved On Look” and The Sadies’ own “Sunset To Dawn” (from their New Seasons album). They ended their set with the incredible and sometimes psychedelic “Story 19” (from their 2013 album Internal Sounds). Dallas used the microphone stand to elicit the synthesizer-like sounds for the song. The use of feedback and technique was astounding. It was an incredible end to the set and they set the bar high.

Then it was time for Skydiggers. They opened by making a point of sharing that it had been over 500 days since they had performed a concert, but their performance showed they had nothing to worry about. They were every bit as good live as they have ever been. Opening with the incredible “Pull Me Down” (from their classic album Just Over This Mountain), Skydiggers dug deep into their rich catalogue and provided an evening of great songs. Andy Maize was in fine vocal form, while Josh Finnlayson played (and sang) his heart out. 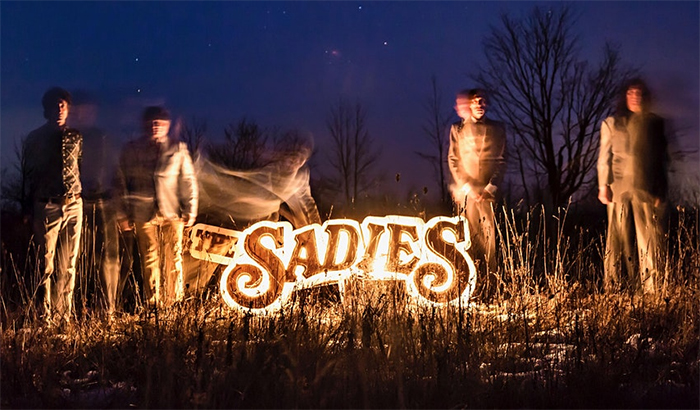 Special mention must go to vocalist Jessy Bell Smith, who performed a wonderful duet with Maize on “Dear Henry”, and a solo spotlight performance of “Ramblin’ On”, which she had recorded on She Comes Into The Room.

As good as the Skydiggers were, and they were excellent, it proved somewhat difficult to follow The Sadies. While Maize danced and was quite amusing at times with his banter, the band could not elevate the energy level to that of the openers. Their song selection was also somewhat interesting, as they tended to go deep into the albums. While unpredictable in that some of their better known songs were not performed, perhaps some of the audience was unfamiliar with songs such as “Like A New Beginning”, “Horseshoe Bay” and their choice of covers such as George Jones’ “Slow Burning Fire”.

Having said that, they did perform two of their better known hits, “A Penny More” and “I Will Give You Everything”, which came off extremely well, thanks to the harmonies. Overall, their set was excellent and they ended with a Jayhawks cover, “Tailspin” and the George Jones song.

The fact remains, it was a wonderful live show in support of an iconic venue in the city of Toronto and it was run extremely well. The sound was great and live music under the stars was just what was needed and fans, judging from the noise made after each song by all three bands. What more could you possibly want?

Born and raised in Whitby, Aaron discovered music through his love of The Beatles. This led to a career in radio, writing for various publications, and ultimately a radio show about The Beatles (Beatles Universe), which ran for over four years. When not immersed in music, Aaron enjoys spending time with the loves of his life -- his wife Andrea, and daughters Emily and Linda (all of whom have an intense love of music too).
RELATED ARTICLES
elliott broodif i'm sparedlive review

by SPILL NEWS on June 2, 2016
THE WILDERNESS OF MANITOBA TO PERFORM NEW MATERIAL AT THE MONARCH TAVERN THE BAND CELEBRATE COMPLETED RECORDING SESSION FOR UPCOMING ALBUM WITH [...]

by SPILL NEWS on May 27, 2016
JUNO AWARD-WINNING ELLIOTT BROOD SET TO RECORD LIVE ALBUM AT THE DAKOTA TAVERN IN TORONTO BAND WILL PLAY THREE SHOWS ON JUNE 21ST, 22ND AND [...]