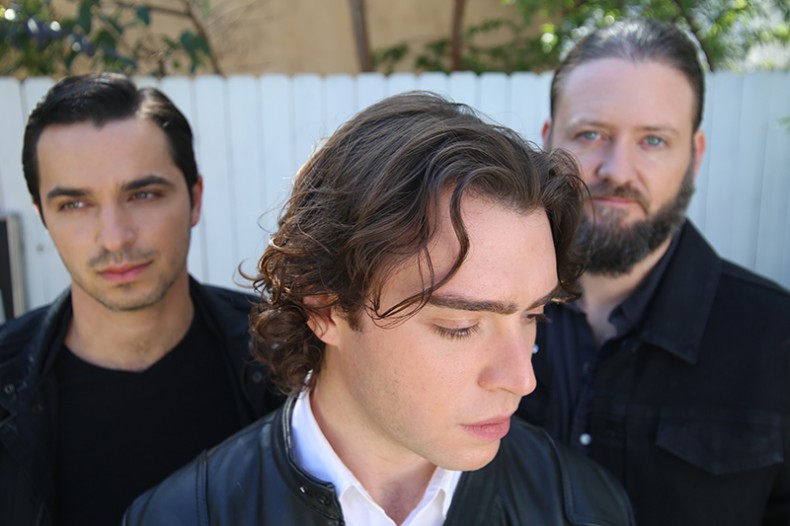 Swerve landed on the Los Angeles scene just last fall with the debut of their self-titled EP. They’ve been on the rise ever since, developing a strong local fan base and drawing comparisons to alt-rock pioneers like Oasis, Gin Blossoms, R.E.M. and The Replacements.

Singer-songwriter Gregory Mahdesian leads the band with a vision of staying true to the foundations of alt-rock. Together with local musicians Casey Baird on drums, Ryan Berti on guitar and Brandon Duncan on bass, Swerve creates songs reminiscent of the Brit-Pop and Grunge movements with a modern sensibility along with a healthy dose of their Californian personalities.

At the East Hollywood speakeasy Harvard & Stone, Swerve played an early set to an enthusiastic crowd. They performed tracks from their self-titled EP, as well as a handful of new tracks from their upcoming EP. Swerve took to the stage in norm-core attire (button down shirts and jeans), with Mahdesian declaring “this is the earliest and sober-est we’ve ever played.”

The band opened with “Know It All,” a grungy jam rock song, showcasing Duncan’s catchy bass line and Mahdesian’s deep vocals. Next, they played a new track “Kennedy,” which will be featured on their second EP. This upbeat song created the ideal ambiance for a prep school dance; the drumming was precise and distinct like heartbeats, as Mahdesian sang, “I’m better off now…” with a nostalgic longing.

Throughout the evening, the audience enjoyed sneak previews of several brand new tracks. One of the highlights was their catchy new single “Are You Coming Home With Me?” Although it was the first time they’d played the song live, Swerve performed the number with confidence and finesse. Another new song, “Dumb Romeo,” was possibly the strongest performance of the evening. The track featured an intense usage of dynamics, with soft, intense vocals followed by loud, passionate guitar strumming. Mahdesian’s vocals soared as he delivered this track with a strong range of emotion.

Next, Swerve embraced the original fans in the crowd as they performed their very first single “Remedy.” Mahdesian sings with conviction, “I’m gonna take you far from here,” accompanied by grungy guitar riffs. The band closed their set with a fan favorite “Aw Hell,” a gloomy track off of their first EP. Mahdesian sings, “sorry that I’ve hurt you,” with a clear sense of despair.

As a whole, Swerve’s live performance created a reflective and moody ambiance with their melodic, guitar-driven tunes. Although the band’s older songs were tried and true fan favorites, the newer tracks stood out as more complex, transporting the group out of the ‘90s and into a distinct new era.

Swerve continues to perform locally while recording a second EP, expected for release by the end of this year. Upcoming performances include a Tuesday night residency at Resident in Downtown LA this May.