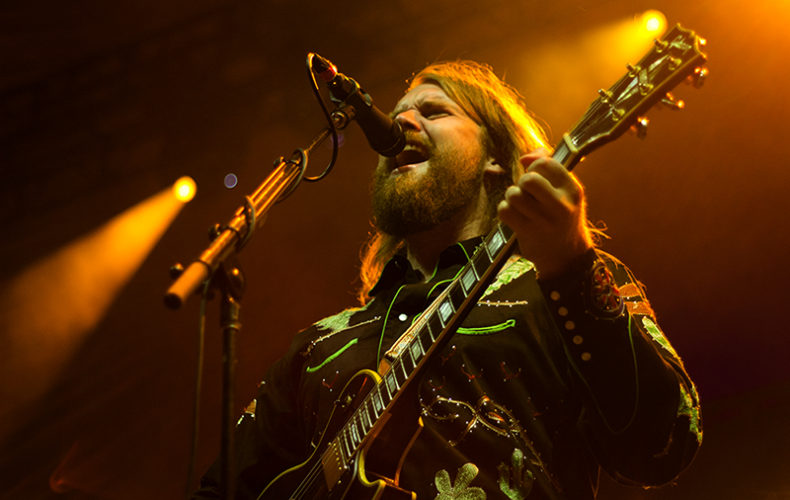 Nice, cool summer evening in Toronto, at the CNE. Nothing says the ending of summer quite like the CNE and evenings like this. By the time The Sheepdogs hit the stage, however, all thoughts of the weather, end of summer and everything else disappeared. The Sheepdogs demanded your attention and they got it. A close to capacity crowd cheered and sang along with this amazing band.

The show opened with opening act Sam Coffey and the Iron Lungs. They played a short but loud set and won over the audience. But it was The Sheepdogs people came to see, and after an hour’s wait, they hit the stage. Opening with the rocking, and energetic “Who?” and never letting up from that point.

A simple, yet effective light show accompanied the band, but that did not really matter, it was all about their singing and playing. The band is awesome on record, live The Sheepdogs are a force of nature. Ewan Currie’s voice and playing were in top form for the entire night. The band were equally tight. Shamus Currie on keyboards was the other highlight for the evening. Brilliant playing and adding the right ingredient to the band’s sound.

It has been a couple of years since their last album, 2015’s Future Nostalgia, so it was great to hear some new songs from the forthcoming album. If these songs are any indication, it will be brilliant. It was the old hits that fans came to hear, and they were treated to “I Don’t Know”, “How Late, How Long” and “Downtown” to name just three.

The Sheepdogs have a unique talent of being retro without being dated. Their sound comes from classic country/rock/blues bands but their sound is contemporary and clearly their own. Guest guitarist Jimmy Bowskill (the pride of Bailieboro, according to Ewan Currie) played some tasteful lap steel. A welcome addition to the show.

The Sheepdogs wrapped up their show with a tribute to Gregg Allman, by performing the classic Allman Brothers’ “Whipping Post”. A perfect ending.

I always figure it must be difficult playing a fair, especially one as big as The CNE. There are a number of competing factors and some people come out of curiosity. But this did not seem to faze The Sheepdogs. They were clearly a commanding presence and they played one hell of a show. The perfect ending for a perfect summer’s day.

Tonight it’s gonna be a rock n roll rollercoaster in TORONTO at the CNE. Doors at 7. FREE show with admission to the park.

Born and raised in Whitby, Aaron discovered music through his love of The Beatles. This led to a career in radio, writing for various publications, and ultimately a radio show about The Beatles (Beatles Universe), which ran for over four years. When not immersed in music, Aaron enjoys spending time with the loves of his life -- his wife Andrea, and daughters Emily and Linda (all of whom have an intense love of music too).
RELATED ARTICLES
broscne bandshelllive review