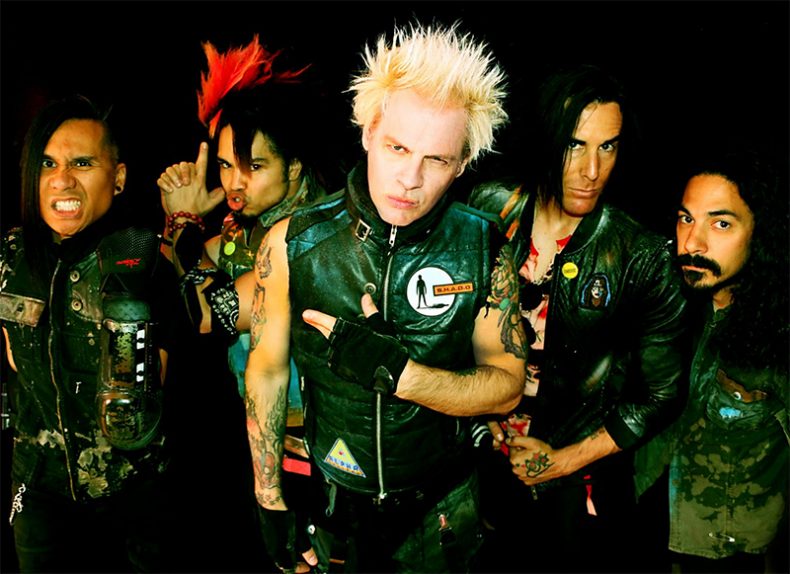 It was drizzling in the small town of Chippewa Falls Wisconsin tonight, but the line of people outside of Every Buddy’s Bar didn’t seem to mind a bit. They filtered single file into the small venue in anticipation of Powerman 5000’s tour marking the 20th Anniversary of their platinum selling album Tonight The Stars Revolt.

Rock/Punk Rock locals Stumpt started the show as a steady line of people continued through the door, playing an excellent cover of the Sex Pistol’s “Anarchy.” There was playful banter amongst the band members as they played their set to a near sold out crowd.

Filthy Sweet, a rock trio from Eau Claire, Wisconsin continued building the anticipation as they played their ten-song set, including a cover of The Toadies “Possum Kingdom” that the audience happily sang along with. “One of the things that made me get into rock ‘n’ roll was bands like Powerman 5000, Static-X, Korn, and all that. I was the little kid in the back seat rocking out while my dad’s subs were just blastin’, so this is just awesome,” Vocalist and Guitarist Chris McIntyre told the crowd.

The band played their song “Untitled” in which they recently released a music video for off of their album Shake Your Bones. Drummer Jackson Kleingartner twirled the drumsticks like it was second nature and he couldn’t resist standing up behind his kit while they played.

A cover of Led Zeppelin’s “Kashmir” was next, except this version had a unique twist. The spotlight focused on bassist Kayla Wrukus, illuminating her blue hair as she played her bass with a cello bow.

“We’ve got one last song for you.” McIntyre said to the crowd as he held out his drink. “But I’m going to put a little Whiskey in my belly first. Here’s to Sundays actually being fun days.” With that he took one last drink before they began their last song “Can She” that McIntyre encouraged the audience to sing along with.

The stage went dark except for a few blue lights as Powerman 5000 prepared to take the stage. The theme music for the classic TV show Star Trek began and the crowd cheered in anticipation. Fog slowly billowed out from the back of the stage as the band entered. The crowd erupted in cheers. Wait, is that, is that green lasers on their guitars!? Bassist Murv Douglas’s trademark spiked afro hairstyle was something to marvel at as well.

The band wasted no time in getting the crowd going with the upbeat “Nobody’s Real” causing the crowd to jump in unison and sing along.  The band felt the energy and gave it right back by jumping as well. The ritual carried on through numerous songs, reminding some of us just how out of shape we really were.

Singer Spider noticed this ongoing energy. Wiping the sweat from his brow with a towel he said “Usually at this point in time I’m trying to keep the crowd going”. “But you guys . . . I don’t have to yell at you or anything!” He smiled.

A cover of the White Stripe’s “Seven Nation Army” made an appearance on the set list that night, along with Powerman 5000 fan favorites “How to be a Human,” “Bombshell,” and “Super Nova.”

After the title track of the album, “Tonight the Stars Revolt” Spider took a moment to reflect on the album’s anniversary.  “Twenty years is a long time,” he mused. “And after all this time, after playing these songs for that long, y’all act like they just came out yesterday, and for that, I thank you.”

“Let’s do one last song!” he announced as “When Worlds Collide” began. The audience yelled the lyrics and jumped in unison one last time.  As the sweaty crowd spilled out into the cool night at the end of the show, the murmurs of “That was awesome, I’d do it again” could be heard.

Trista’s a music addict who’s taste in music spans over numerous genres. She enjoys playing her bass guitar, but honestly she’s not very good at it. So she goes to concerts and watches real musicians who are far more talented than her. You’ll find her there in the front row, because, well, she’s short and wouldn’t be able to see the stage very well otherwise, and because she strives to get the perfect photo to capture the experience.
RELATED ARTICLES
live reviewpowerman 5000spider one