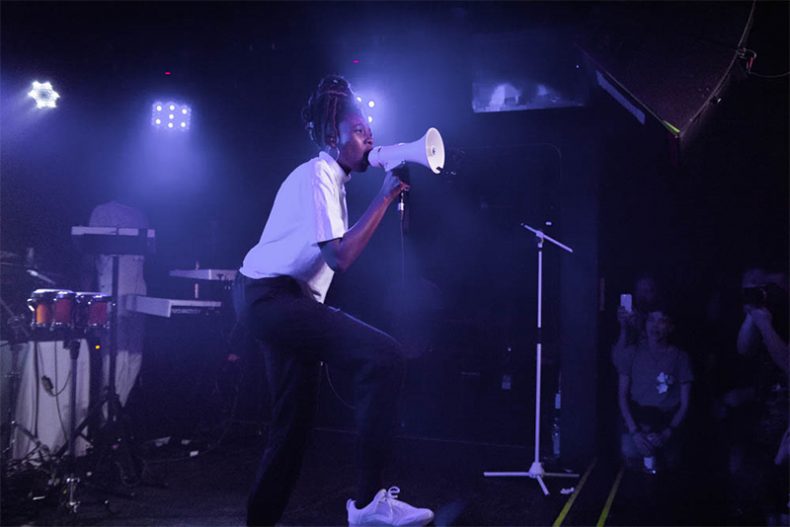 Fresh off the release of the album GREY Area, Little Simz came to Toronto for the last stop of her sold out North American tour.

The 25-year-old hip hop artist started her set with the energetic song “Boss”.“Hype shit never hype bitch/Know now that you’re dealing with a crisis” she rapped unapologetically into a megaphone. She grabbed the audience’s attention immediately, and never let it go.

There was sucha great flow from song to song, with elongated outro’s, jams and other surprises. At one point, Simz’s producer Inflo asked the audience if they could just have a groove session, he played “Xxplosive” by Dr. Dre (an Erykah Badu remix) and “Big Poppa” by The Notorious B.I.G. Little Simz played bass along to these songs with her band.

The chemistry between Simz and the audience was undeniable, especially during the song “Woundz” where the audience spontaneously sang the hook as the singer stepped away from the mic and danced. Her set mainlyconsisted of new tracks aside from the piece “God Bless Mary”, a candid song dedicated to her next-door neighbor who never complained about the loud music she would play late at night. This track takes the personal, diary-entry style of writing of J. Cole’s “Wet Dreamz” and brings it to the next level, painting a vivid picture of humble beginnings and where dreams can take you.

Little Simz doesn’t take any short cuts, each of her bars were delivered with precision. Her wordplay is sharp and the reason it cuts so deep is because you feel every word she says, there’s no glitz or glamour. . On “Venom” the UK rapper unleashes bar after bar over a dusty beat before the ominous strings come back letting the listener soak everything in.

As an avid and longtime fan of hip-hop I was blown away by her performance. Little Simz is a force to be reckoned with, and one of the best lyricists in the game right now.

Cory is a film maker and music lover raised in the GTA. Ever since a young age music has been a big part of Cory’s life and he often combined his love for music and film together, creating videos of him and his friends skateboarding to their favourite songs. This trend continues in his life as everything he surrounds himself with is always involved with or inspired by music.
RELATED ARTICLES
bosslive reviewtoronto