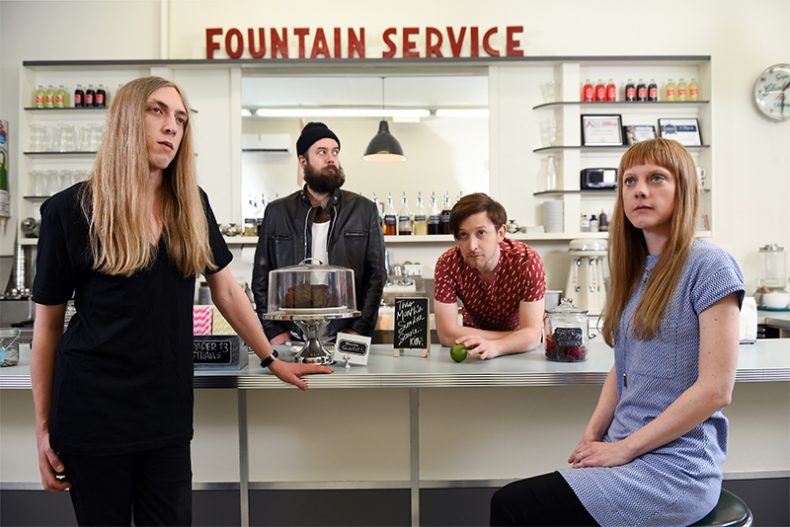 Limblifter: according to Ryan Dahle, it is another word for a landlubber. A landlubber? The band’s performance last night in front of packed house at Toronto’s legendary Horseshoe Tavern was put on by much more than that.

Limblifter put on a fantastic performance tonight at The Legendary Horseshoe, their second performance after kicking off their current tour last night in London, Ontario, in support of the 20th anniversary of the release of their self-titled debut album. Originally released digitally in 1996, resurgence in vinyl spurred Toronto’s record label We Are Busy Bodies, and its owner Eric Warner, to produce a vinyl reissue of the album 20 years after its release. If audience participation is any measure, it was clear that the audience was there to celebrate.

Ryan Dahle is clearly at home in front of his audience. Bantering back and forth with the audience with everything from TV show recommendations and the vastness of Netflix, to teasing drummer Breitenbach about wearing his girlfriend’s shorts (and potentially falling out of them), breaks between songs were filled with playful exchanges. “I wish I could transcribe every comment that just went by,” Dahle declared at one point. The resulting feel was heading over to a friend’s place to watch him and his band jam in the basement; the difference being this was LIMBLIFTER JAMMING!!!

After playing through the entire album from front to back, the band continued in with a delightful mix of songs from their past three albums. “This is where you’re supposed to take a break but we’re just going to keep on playing.” “Should we do the WHOLE second album?” Instead, they played a perfect mix of selections from their following three albums, two-hour+ set of Limblifter classics.  The audience was left drenched and exhausted, truly a night to remember.

Limblifter still has a few dates left on this brief tour.  Be sure to catch them if you’re in the area.

Trish Melanson lives in the Toronto area with her three boys, Nicholas, Justin, and Eric, her dog Jakkson, and her cats Max and Jagger. She is the former host and producer of Canadian Kickass, a weekly two hour radio show on New Jersey's Chestnut Radio, showcasing Canadian Music. She is also a former Web Content Manager of Indie Soundscapes, an online showcase for Independent Music Artists Worldwide, and was a regular music contributor to The Stroumboulopouli. She is a fervent supporter of the Toronto live music scene. In a past life she was a teacher and Vice Principal in Durham Region. She has many more new and exciting projects waiting in the wings. ;)
RELATED ARTICLES
horseshoe tavernlimblifterlive review

by Gerrod Harris on August 15, 2019
CJ Ramone @ The Horseshoe Tavern, Toronto   August 15, 2019  While best known as the long-time bassist for The Ramones, CJ Ramone has since enjoyed a musically diverse solo [...]