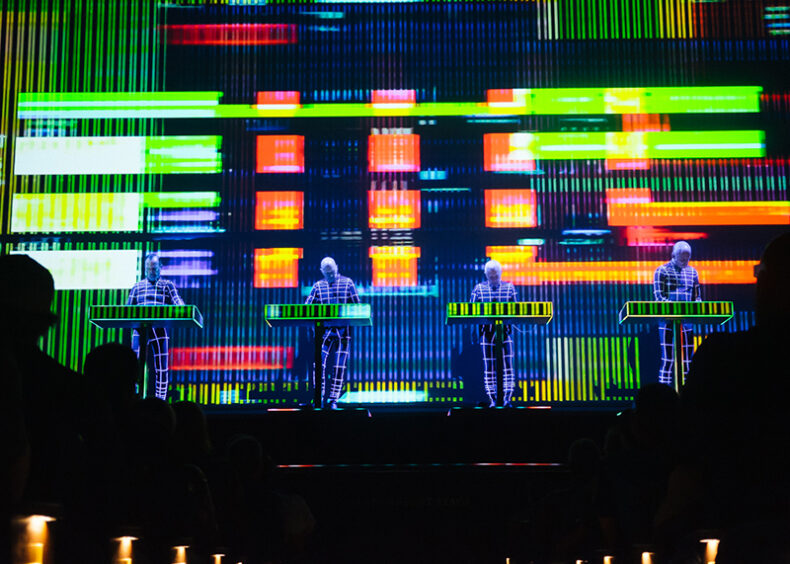 On this evening there would be no attempts to jump the stage to steal a hug from a member of one of the most influential electronic synth-pop bands of all time as there was during Kraftwerk’s previous visit to Toronto in 2014. However, the excitement and anticipation were still very much in the air as this was Kraftwerk’s first concert in the newly renovated Massey Hall since their groundbreaking set in 1975.

Immediately the influence of Kraftwerk was felt by the diversity of the concertgoers. The sold-out show included fans of all ages with a number of people donning the band’s iconic red shirt and black-tie combo. Kraftwerk 3D glasses were distributed to the crowd, joyfully necessary to fully immerse oneself in the experience.

Heading to their seats, fans were greeted by the four famous keyboard podiums. For the uninitiated, the setup was reminiscent of a boardroom meeting. But as soon as the four members, Ralf Hütter, Fritz Hilpert, Henning Schmitz, and Falk Grieffenhagen took the stage in video game motion-capture body suits, all those boardroom meeting concerns quickly faded. 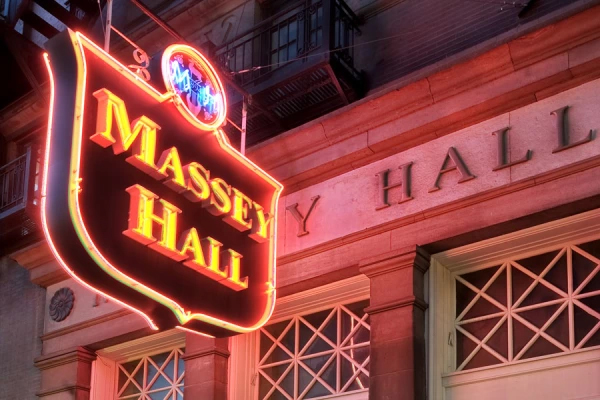 The band opened with “Numbers / Computer World / Computer World 2” and the gimmick of a 3D concert no longer felt gimmicky. The attention to detail and quality of the 3D glasses was that of the same that Kraftwerk gives to their music. The visual effects were immediately impactful, so much so that you could see people’s hands reaching out into the air from their seats to try to grab a number or two that shot out into the crowd from the screen behind the band. This would continue to happen throughout the night as each song took you on a different sonic and visual ride. Even the CN Tower and the host venue itself made appearances.

The setlist for the evening touched on most of Kraftwerk’s discography while heavily leaning on their classics, such as The Man-Machine from 1978, and 1981’s Computer Love. Some of the best responses of the night were from their singles “Autobahn”, “Tour De France 2003”, and “Trans-Europe Express”.

The encore was kicked off by “The Robots” which had the feel of a sci-fi B movie but was a nice visual change from the main set. The band then came back on stage and launched into a 3- song encore closing with “Music Non Stop” with each member leaving the stage individually. With founding member Ralf Hütter as the last man standing, he was deservedly given a standing ovation by the appreciative crowd.

The consensus leaving Massey Hall and later from friends on social media was that this was considered a bucket list show, that the experience did not disappoint, and that it in fact exceeded all expectations. Kraftwerk still has many US tour dates going forward but only one Canadian date remaining on this North American tour. If there are any doubts, leave them behind, put on your 3D glasses and check out this show.

The Spill Magazine is a Toronto-based online publication dedicated to covering the independent music scene with a strong focus on our thriving hometown talent. Our writers bring you up-to-date news, in-depth features on musicians and reviews for the latest CD releases. We also travel to the front lines for all local festivals including Canadian Music Week and North by Northeast. Don’t forget to check out our Facebook and Twitter pages for all daily Spill updates.
RELATED ARTICLES
kraftwerklive reviewmassey hall
8.0

SPILL CONTEST – WIN A COPY OF ‘DARE’ BY DAVID LAURIE!