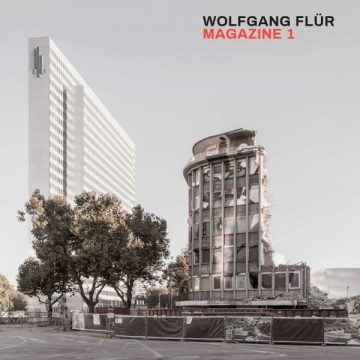 From 1973 until 1987, Wolfgang Flür was a member of Kraftwerk. After leaving Kraftwerk, he was involved with Yamo, collaborated with a number of artists, and released some solo records. On Magazine 1, Flür works with several artists, many from the 1980s. This is electronica at its finest, with loads of synthesizers and programming.

A good example of this is “Zukunftsmusik” which features German band U96. This is classic Flür from beginning to end. If I can use the term minimalistic when discussing electronic music, this is it. The next track, with U96, “Best Buy”, does not reach the same heights, but it still has a great deal going for it and is a welcome addition.  Midge Ure pops up with “Das Beat” which does sound like a mashup between Ultravox and Flür, to great effect.  It is the best track on the album and one that just grows stronger with each spin. Former New Order bassist Peter Hook and Claudia Brücken of Propaganda are up next with “Birmingham”. While Brücken’s presence is clearly felt, and her vocals are fantastic, Hook gets a little lost in the mix. Yes, his trademark bass can be heard periodically, but it seems a little buried as well.

The album ends with some of the weaker tracks on the album. “Night Drive”, featuring Anushka, is more dance-oriented while “Electric Sheep”, featuring U96 and Carl Cox is not so much a bad song, but it does not stand out and is more of the same electro dance music. These are not bad songs, but they could have used more from Flür. However, the album ends on a high note with the exceptional “Say No!” featuring MAPS. This is a much more layered, intense song with stirring narration. A strong song of defiance in these times is always welcome.

Magazine 1 is different from his last solo album and here Wolfgang Flür does take some chances and does not always do what one expects. There are a couple of predictable songs on the album, but there are also a lot of twists and turns throughout it.  It is an album that brings everything together for Flür. His experimental side, his electro-pop side and his ability to collaborate with very diverse artists.