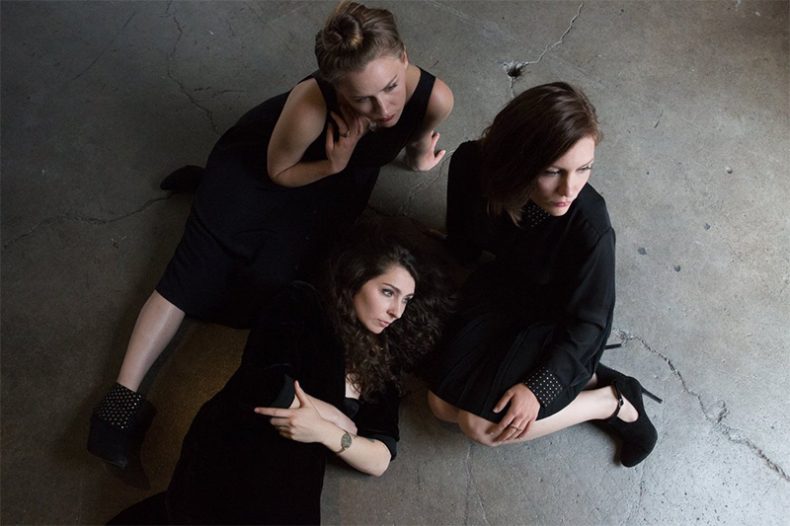 Joseph brought their signature, intricate harmonies to warm an otherwise chilly October Tuesday evening at Toronto’s newly renovated Great Hall on October 25, 2016. It was their only Canadian stop on their latest tour. The audience, mesmerized, sang along to the rising Portland Indie Rock trio’s songs from their second album, I’m Alone, No You’re Not (ATO Records). Brian Kesley & Will Tendy backed Joseph sisters Natalie, Meegan and Allie Closner. William Wild from Knoxville, Tennessee was the opening act.

Natalie Closner, the guitarist-singer-songwriter and eldest sister of the talented family trio grounded the powerful band with her energetic, foot-stomping rhythms and edgy vocals. The twins, Meeg (often centre stage) and Allie, along with Natalie filled the venue’s cathedral ceilings with their soaring, ethereal harmonies that have earned Joseph its much-deserved breakout success.

The Great Hall stage recalled a venue in Nashville – the city where Natalie honed her musical craft. The concert’s sequence of songs, including a cover of “Moonlight Mile” by The Rolling Stones, blended seamlessly while building toward the group’s current hit single “White Flag.” Joseph’s encore closed with two members of William Wild joining to sing “Sweet Dreams,” a song dedicated to the sister’s mother. Near the end of the show, Natalie explained that Toronto was their first and only show without their drummer, who unfortunately got turned away at the border due to Visa issues; his absence was hardly noticed, however, due to the band’s tight musicianship.

Joseph’s bursting performance was dotted with quips about how the group finally had a break from the US election by being in Canada. Natalie also remarked that Toronto is the first city where they heard their song on the radio for the first time. The sisters also shared moments of personal insight while on their first international tour. Natalie mentioned how, despite living her dream and performing on their favourite television talk show the day before, she was still plagued with the same petty, annoying issues. “I realized that love and peace come within,” she smiled, touching her heart.

“When I was sad,” Meeg confessed before the rich tapestry of harmonies in the song “I Don’t Mind,” “I used to want someone to say these things to me – but I realized the other night, while singing this song, that I need to be able to tell myself this first before anyone else can.”

The intimacy that Joseph delivers in their concert is spellbinding. Their contagious harmonies will lift you up. Their infectious songwriting will envelop you with a cheer-raising and comforting hug.

Natalie continuously showered the Toronto audience with gratitude and “Happy Tuesdays!” For all concertgoers, Happy Tuesday proved to be an understatement.

Download I’m Alone, No You’re Not via ATO Records HERE.

Talia Wooldridge is an avid music lover, composer and ethnomusicologist who contributes artist interviews, live concerts, festivals and album reviews for Spill Magazine. She has written extensively on the intersection of music, personal identity and cultural symbolism with an early focus on Latin American Hip Hop and female Cuban rappers. In her spare time, Talia writes, composes music and manages Music Can Heal, a non-profit that brings live, award-winning musicians to inspire healing in hospitals, hospices and communities in need. Her next project is an interactive music-travelogue exploring music cultures and music travel around the globe. Follow her here: www.taliawooldridge.com + www.movetoyourownbeat.com.
RELATED ARTICLES
allison closnerato recordsjoseph