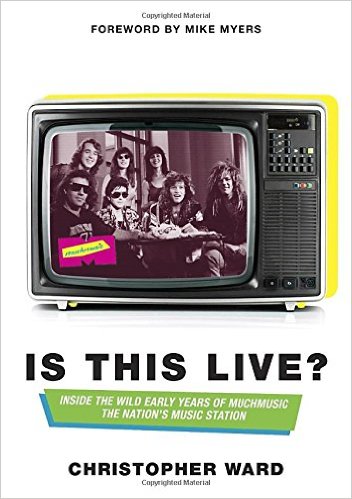 Christopher Ward – Is This Live? Inside the Wild Early Years of MuchMusic The Nation’s Music Station

“We have to write this stuff down,” original MuchMusic VJ Christopher Ward shares at a live Q&A launch at Toronto’s Royal Theatre in October when asked where the idea for the book, Is This Live? Inside the Wild Early Years of MuchMusic The Nation’s Music Station came from. “That’s what I realized when we would get together at old MuchMusic reunions.”  On October 25, 2016, Ward released his colourful and hilarious coffee table book published by Penguin Random House. It serves as a hefty tome of fun, behind-the-scenes facts, figures, and anecdotes about the live, guerrilla-style television network that dominated Canadian television sets throughout the ‘80s and ‘90s.

MuchMusic, Canada’s beloved music station, was born on August 31, 1984. It was the dream child of television visionary Moses Znaimer and John Martin (The New Music). It has been described as the “live, gloriously unpredictable, seat-of-the-pants TV” that was “delivered fresh daily to an entire generation of Canadians.” MuchMusic became the voice of authority on new music and pop culture for many teens that tuned in daily to see their latest musical crushes and VJ heartthrobs.

Through a collection of old photographs and engaging, quick-to-read interview snippets that recall the quick-cut video editing style music videos introduced, Ward catalogues the growing stages from MuchMusic’s humble beginnings at Queen St. E., from how various shows  were created and named (VJ and author Kim Clark Champniss is credited with naming “Electric Circus” over drinks at the now defunct bar, X-Rays, for example), to how the Canadian music station launched the careers of VJs and new musicians, including the likes of The Tragically Hip, Jann Arden, Blue Rodeo, Barenaked Ladies and Sarah McLachlan. 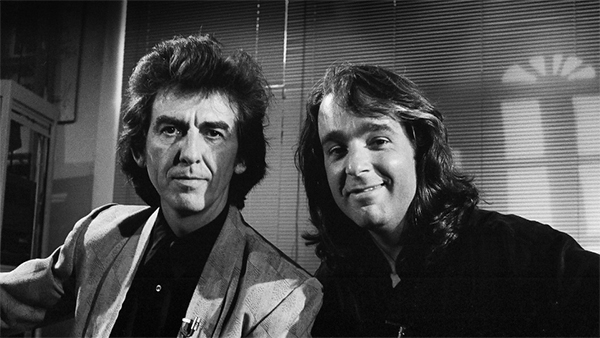 The launch for Is This Live? Inside the Wild Early Years of MuchMusic The Nation’s Music Station included a screening of 50 minutes of old film footage stitched together by Ward and a team of archivists and editors, who scoured the basement of 299 Queen St. W.  Highlights included Hollywood movie stars completely forgetting their interviewer’s question while jumping around and scratching his nose, to David Bowie turning the interview around onto Laurie Brown in 1987. You can view some of these videos from the vault here. The  montage was followed by a casual after-party at the Monarch Tavern, DJ-ed by Clark Champniss himself.

I was particularly surprised to learn the original MuchMusic Video Awards ceremony was a cross Canada train ride/Pepsi challenge, where awards were given out at every stop along the way. By the time they reached the east coast, the train station was full of throngs of cheering teenagers.

Also noteworthy is the freedom that the VJs had. It is eye-popping! In today’s conservative corporate television culture, it is easy to see how in the early days MuchMusic earned its rightful nickname of the “Wild (Canadian) West Of Television.” It is also important to see how the history of rock royalty graced our airwaves, and to watch an early Maestro Fresh Wes, for example, rap on MuchMusic before he started collecting Grammys. 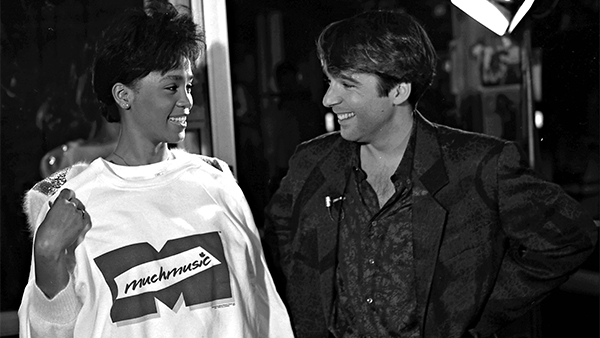 Ward’s Is This Live? Inside the Wild Early Years of MuchMusic The Nation’s Music Station is a must-have yearbook for lovers of Canadian music and pop culture. It reflects our humble, non-glossy, and goofy music television beginnings – before and after the infamous “Speaker’s Corner” (where else could you actually watch yourself on television for a few bucks?).  Is This Live? brings humour, and adds some more clout to Canada’s badass cultural history.

“It’s impossible to talk about the beginnings of MuchMusic without talking about Christopher Ward,” Mike Myers, a friend and colleague of Ward’s, writes in the foreword. “Because in many ways there is so much of Christopher Ward in MuchMusic.”

Is This Live? Inside the Wild Early Years of MuchMusic The Nation’s Music Station is available for order online at Indigo/Chapters, Amazon and Penguin Random House.

Talia Wooldridge is an avid music lover, composer and ethnomusicologist who contributes artist interviews, live concerts, festivals and album reviews for Spill Magazine. She has written extensively on the intersection of music, personal identity and cultural symbolism with an early focus on Latin American Hip Hop and female Cuban rappers. In her spare time, Talia writes, composes music and manages Music Can Heal, a non-profit that brings live, award-winning musicians to inspire healing in hospitals, hospices and communities in need. Her next project is an interactive music-travelogue exploring music cultures and music travel around the globe. Follow her here: www.taliawooldridge.com + www.movetoyourownbeat.com.
RELATED ARTICLES
bookschristopher wardmuchmusic