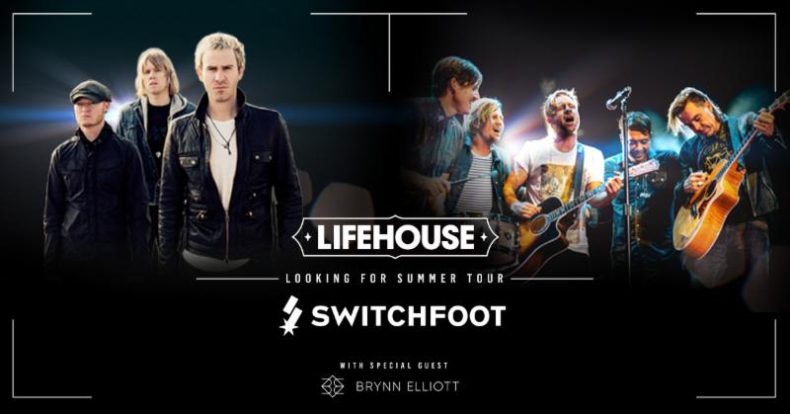 SWITCHFOOT TO TOUR WITH LIFEHOUSE FOR THE FIRST TIME EVER

Rock fans across North America can look forward to seeing Switchfoot and Lifehouse together for the first time on the “Looking for Summer” Tour, delivering 30+ shows to venues across the U.S. and Canada. The tour kicks off on July 23 at the Fillmore Auditorium in Denver, CO and will run into the fall, culminating at The Masonic in San Francisco on September 10. Up-and-coming songstress Brynn Elliott will open every night of the tour. For additional information and a full list of upcoming dates, please see below or visit:  www.LookingForSummerTour.com.

On the upcoming tour, the band shares: “We are amped to announce that we are going on tour with Lifehouse for the first time ever. We’re calling it the ‘Looking for Summer’ Tour and we can’t wait to sing these songs with you.”

Pre-sales for the Switchfoot and Lifehouse fan clubs begin today as early as 11am local, with additional pre-sales rolling throughout the week. General on-sale begins Friday, April 7 @ 10am local.

Beyond their career achievements, Switchfoot has also been active in a variety of philanthropic efforts, raising over a million dollars to aid kids in their community through the band’s own Bro-Am Foundation, a long-running annual benefit surf contest and concert that’s held every summer in Encinitas, CA. $1 of every ticket sale will be donated to Switchfoot’s BRO-AM Foundation providing services to underprivileged and disadvantaged youth. They’ve also maintained a deep commitment to a variety of humanitarian causes, lending their support to such worthy organizations as CURE International, DATA, the ONE Campaign, Habitat for Humanity, Invisible Children, and To Write Love on Her Arms.