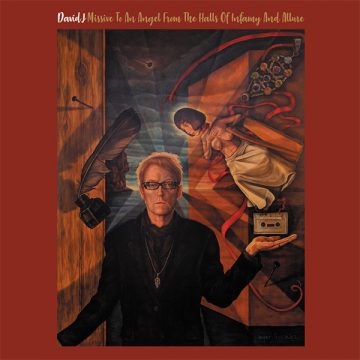 David J is a very busy musician and over the years this multi-talented bassist has played with several bands, including Bauhaus, Love and Rockets, and Jazz Butcher. He has also established his own solo career full of some of the most interesting music over the past 30 plus years. Missive To An Angel From The Halls Of Infamy And Allure is his latest release, as well as his best solo album. In many ways, David J has produced an album that sounds like he has come completely full circle. In fact some of the album was recorded in the same studio Bauhaus had used for “Bela Lugosi’s Dead”.

He employs a variety of vocal styles such as spoken word, but the key is that he sets his vocals to moving and beautiful music. J has called in some impressive help from fans and friends, including Anton Newcombe of Brian Jonestown Massacre, Toby Dammit of Nick Cave And The Bad Seeds, Paul Wallfisch of Swans, Sean Eden of Luna, Rose McGowan, Asia Argento, Emily Jane White, Annabel (lee) and Czech violinist Karel Holas. The end result is remarkably arranged music.

The album is self-reflective, and quite frankly intensely melancholy. J reflects on the past and his own role in his memories. He does not shy away from his part and takes full responsibility, perhaps too much at times. This is an artist confronting the past and not running from it.

As mentioned, his vocals in combination with the stunning arrangements create a heart-tugging experience. J has never sounded better. His voice is very distinct and full of feeling, from beginning to end. Sure, there are the experimental sounds, and at times it gets kind of noisy, but the winning tracks just float out of the speakers into your soul.

The album comes to a close with the somber “I Hear Only Silence Now”, which originally appeared on David J’s debut solo album, Etiquette Of Violence. On this album, the song becomes almost a lament. The guitar of the original is replaced by a piano and when he sings

it feels much more painful. The youthful voice is replaced by the voice of a person who has experienced his share of life.

The beauty of the album is that it is a complete album, from beginning to end. It lulls you in, and you remain inside the grooves until the last quiet moment. J is learning the pleasure of using silence and does not have the need to fill in the quiet spaces. He embraces the quiet and the end result is a work of art. Missive To An Angel From The Halls Of Infamy And Allure is an album destined to earn the title ‘classic’.

Born and raised in Whitby, Aaron discovered music through his love of The Beatles. This led to a career in radio, writing for various publications, and ultimately a radio show about The Beatles (Beatles Universe), which ran for over four years. When not immersed in music, Aaron enjoys spending time with the loves of his life -- his wife Andrea, and daughters Emily and Linda (all of whom have an intense love of music too).
RELATED ARTICLES
album reviewalbum reviewsbauhaus
9.0