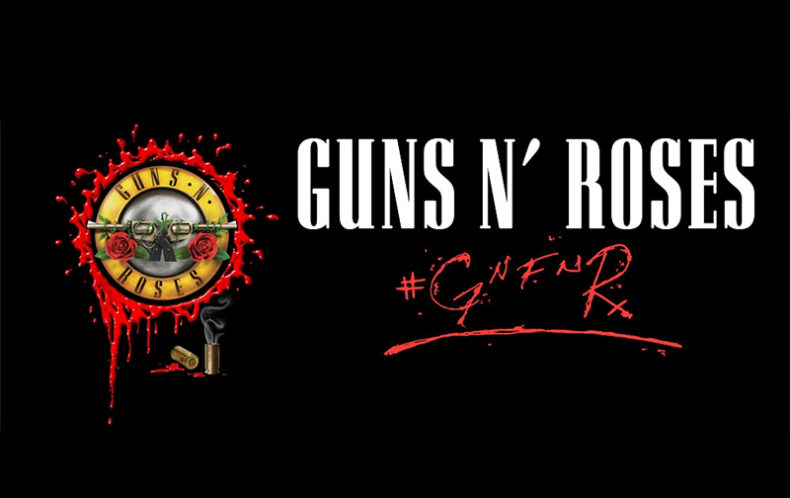 Prior to the release of their 1987 debut record, Appetite For Destruction, Guns N’ Roses had embodied the quintessential mantra of sex, drugs, and rock & roll making them a staple for both classic and modern rock. While original drummer, Steven Adler, and rhythm guitarist, Izzy Stradlin, left the band in 1990 and 1991, the central three figures, lead guitarist Slash, bassist Duff McKagan, and lead vocalist Axl Rose, haven’t performed together since the conclusion of the Use Your Illusion Tour in 1993, which was followed by the departure of Slash and McKagan within the next few years. That is, however, until the impossible happened when it was announced that in 2016, the core three members, along with long time keyboardist Dizzy Reed, guitarist Richard Fortus, drummer Frank Ferrer, and synth player Melissa Reese would be getting back together for the appropriately titled Not In This Lifetime Tour. What was only supposed to be a few select dates at stadiums across North America and Europe has now grown into a wildly successful tour that is now supposedly on its last leg. While this was not their first Toronto show on the tour. they performed here as a part of their first set of tour dates in July 2016, this was the first of two back to back concerts that felt just as triumphant and exciting as if it was the first time.

Opening with “It’s So Easy”, from the first moment the band took the stage it was clear this was going to be a good night. Without skipping a beat, the band launched into “Mr. Brownstone”, followed by “Chinese Democracy”,  one of the few songs from the 2008 record of the same name. Their set continued to build as Rose howled, “You know where the fuck you are? You’re in the jungle baby. You’re gonna die”, launching the band into one of the greatest album openers of all time, “Welcome To The Jungle.” To say that Guns N’ Roses is one of the best hard rock bands is an understatement. Simply put, no one plays hard hitting and gritty rockers like them. This, however did not inhibit them from laying out a number of ballads and softer numbers of the likes of “Don’t Cry”, “This I Love”, “Patience”, and an instrumental cover of Pink Floyd’s “Wish You Were Here” that led into an epic performance of “November Rain”.  The band also took the time to pay tribute to Glen Campbell with a mostly acoustic cover of “Wichita Line Man” as well as a moving rendition of Soundgarden’s “Black Hole Sun” in memory of “Chris Cornell.

Over the course of their monolithic three and a half hour set, Guns N’ Roses played hit after hit, from “Sweet Child O’ Mine” to “Civil War”, and included a wide range of deep cuts as well, of the likes of “My Michelle”, “Double Talkin’ Jive”, and “Coma”.  The band sounds incredibly energized and their endurance is relentless. While the energy of the show would naturally dip with the performance of a power ballad, the band continued to play on as if it was their first song of the night, playing with precision, confidence, and excitement.  While Rose tends to prefer singing in a full bodied baritone range, his earth shattering screams are still in fine form and, where he uses his higher register sparingly, feels far more climactic.  Behind his signature curls, sunglasses, and top hat was Slash, a man from “depths unknown”, that is how Rose introduced him. His performance ranged from sleazy, bluesy, and often teetering between punk and metal.  His guitar work and extended solos throughout the show remains as one of the most unique among the hard rock genre and is one of the few guitarists whose playing is almost like a signature; in other words, Slash sounds unapologetically like you’d like him to: classic Guns resting between the blues and metal with a whole lot of character.  As a whole, the band is likely tighter than they have ever been as best seen during “Rocket Queen” and “Knockin’ On Heaven’s Door” where the band took the opportunity to jam during the solo sections, allowing for Slash and Fortus to trade solos. Other highlights included the band’s explosive performance of “Nightrain” and their show closer, “Paradise City”, both of which were performed spectacularly and featured extended solo sections to add to the excitement.

As they continue to embark on the final stages of their Not In This Lifetime Tour, Guns N’ Roses stand as titans of rock, just as they did when they made their fiery debut in 1987. Watching them perform, it is obvious that not only does each member put their all into delivering a set that remains highly entertaining and engaging throughout its length, but that the members are feeling the very excitement that the audience is. While the reunions of Slash, Duff, and Rose signifies that the impossible can very well be possible, it leaves me very excited for what is to come from the band, whether it be future tours or even the release of a record that is speculated to be in the works.  While stupidly missing the band on their first Toronto show since the reunion in 2016, I have been waiting to see Guns N’ Roses for roughly twelve years, and the band not only exceeded my own hype and expectations, but they left me completely blown away.  While there was never any doubt, it is clear that Guns N’ Roses are nothing short of one of the greatest rock & roll bands ever, and their current tour is a testament to exactly that.

A passion for music has always been a part of Gerrod’s life. As a young boy, he was raised on a steady diet of the music from The Chili Peppers, Aerosmith, The Stones, Prince, and others from his mum. Raised in the GTA, Gerrod continued to foster his love for music by attending a wide range of concerts and learning the drums. His unapologetic passion for music has no bounds and has spread to a wide variety of styles, whether it be the 90’s rock that sound tracked his teenage years, the jazz he studied in university, or his newfound love for hip-hop. He recently received his bachelors in music and education from York University and is passionate about writing and reviewing good (and less than good) music. Gerrod is also the drummer and songwriter for a Toronto based rock & roll band, One In The Chamber.
RELATED ARTICLES
appetite for destructionguns n' roseslive review
10

by Gerrod Harris on August 1, 2017
YOU’RE IN THE JUNGLE BABY: APPETITE FOR DESTRUCTION AT 30 The 1980’s were an interesting period for music. While classic rock began to turn towards the wailing frequencies of [...]