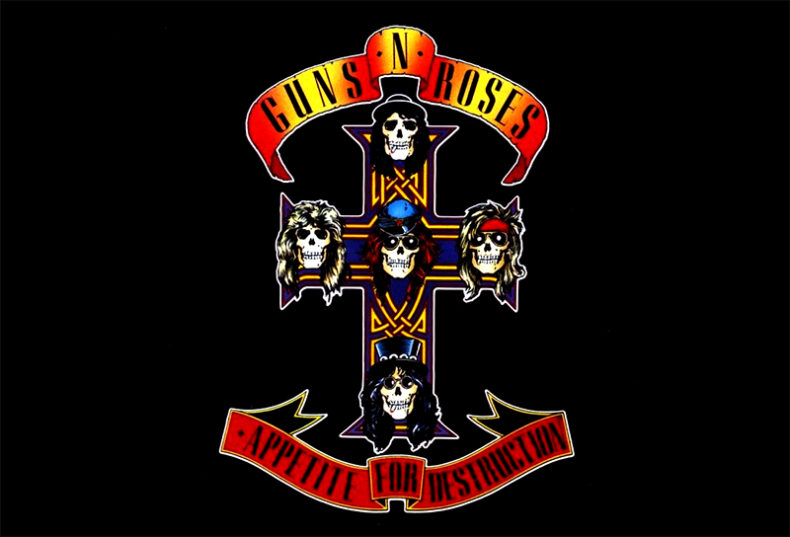 YOU’RE IN THE JUNGLE BABY: APPETITE FOR DESTRUCTION AT 30

The 1980’s were an interesting period for music. While classic rock began to turn towards the wailing frequencies of hair metal and glam rock in the late 70’s, ushering in an era dominated by bands like Kiss, Van Halen and Mötley Crüe, the pop world was dominated by three, albeit spectacular, yet inescapable voices: Madonna, Michael Jackson, and of course, Prince. Punk had returned to the underground nearly as quickly as it shot to the top of the charts and would begin to fuel yet another counterculture movement which would explode out of California and Seattle towards the end of the decade; all the while disco would lose much of its popularity by the early portion of the decade, largely due to the racism and homophobic rhetoric of the Disco Sucks Movement. In between all of this, the unlikely story of how five boys out of Los Angeles would go from outcasts to rock & roll royalty was just beginning.

Formed in 1985, Guns N’ Roses began to take the city of Los Angeles by storm as the next group of bad boys with a highly rebellious attitude and an explosive temperament. In 1986, the group would be signed to Geffen Records, and in 1987- following the release of Live ?!*@ Like a Suicide EP – Guns N’ Roses released their debut full length record, Appetite For Destruction . The album, while being met with much adversary comments from critics, would be certified platinum eighteen times in America alone, selling over thirty million copies worldwide, making it one of the most impressive debut albums of all time. Last Friday, July 21 st , 2017, marked the 30 th anniversary of this album; but why is it still considered one of the most influential rock records of all time, thirty years later? 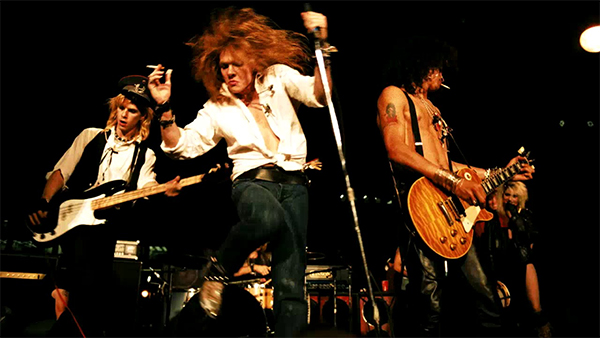 While it is certainly easy to write Appetite For Destruction off as yet another hair metal album riding off a decade of decadency and debauchery- largely due to the fact that the band came out of Los Angeles in the 1980’s- to do so would mean to ignore the album’s influences and nuances. In fact, upon extensive listening, aside from time and geographical similarities, the record has very little to do with the genre it is often associated with. Listening to the record, it actually has far more to do with the 1970’s Los Angeles punk scene and classic rock icons of the likes of the blues from The Rolling Stones, the solos from Aerosmith, and the riffery of Led Zeppelin. Lead guitarist Slash had at one point stated that Guns N’ Roses had gone to great lengths to separate themselves from other bands of the Sunset Strip, through their music and further through dressing in gritty and street styled fashion rather than reaching for the makeup and spandex.

It was their drive to become a separate entity from the local scene which made them so different, in many ways making them appear like a breath of fresh air for rockers who were becoming tired of a genre where the biggest names were becoming slightly formulaic, and just like the first coming of glam rock in the early 70’s, a parody of itself. Instead, GNR looked to the fast pace, edge, and aggression of California’s punks to properly illustrate the lives they had lived on the desolation of the Los Angeles streets, bouncing from girlfriend’s couches and strippers beds, drifting from one high to the next as they tried to make it to the next gig. It was this outlaw lifestyle that spawned such classics like “Mr. Borwnstone”, “My Michelle”, “Out Ta Get Me”, and of course, “Welcome To The Jungle”- the jungle of course being Los Angeles, a place seemingly where anyone trying to start anew was bound to die. These songs, especially the latter, captured a juxtaposing sense of both hope and hopelessness while also celebrating a renegade attitude in the face of any and all opposition and absolute desolation. 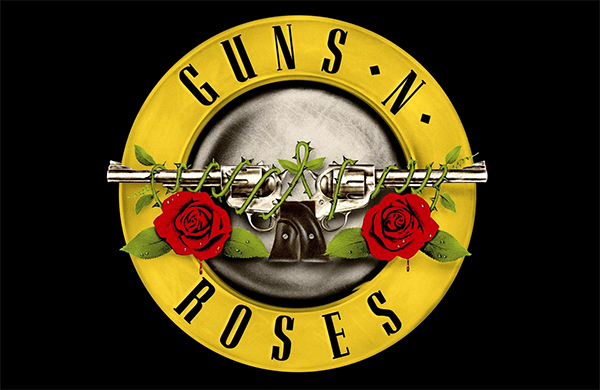 Sonically, Appetite For Destruction captures this attitude with its loud, hard, and fast delivery with Axl Rose’s vocals and Slash’s slithery guitar at the forefront. Backing them was one of the best hard rock rhythm sections of the era with the ever energetic Steven Adler on drums, the tasteful rhythm guitar work of Izzy Stradlin, and the moving bass lines from Duff McKagan. At the time, each member of the band seemed integral, with fans connecting with each member. Each of them being a prominent part of the album. The record itself sounds almost as if it was recorded live in a tight room allowing for excessive bleeding between amps, drums, screams into the different microphones. It is this sound which further creates a connection between Guns N’ Roses and the often low budget punk records of the 70’s, while also giving the album an abrasive edge that would cut through any silence. In short, the record sounded like the tales which Axl spun through his clever, witty, and volatile lyrics.

If any further proof on their influences was needed, a quick look at the track listing of the band’s 1993 release, The Spaghetti Incident – a collection of covers which almost intentionally avoids any of the expected sources of inspiration- would allude more to the signifigant punk influence Guns had. The album included a cover of The Stooges “Raw Power”, The New York Dolls “Human Being”, The Dead Boys’ “Ain’t It Fun”, Nazareth’s “Hair Of The Dog”, and a fusion of T.Rex and Soundgarden’s “Buick Makane (Big Dumb Sex)”. Along with these, the band was also known to cover Bob Dylan’s “Knockin’ On Heaven’s Door”, AC/DC’s “Whole Lotta Rosie” and the infamous recording of The Stones’ “Sympathy For The Devil” which lead to the firing/quitting of Slash from the band in 1994. 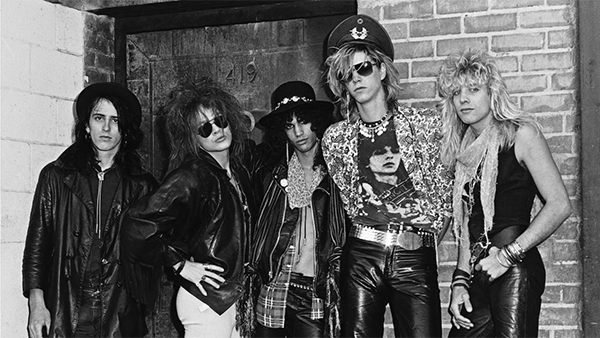 In a time where everyone was posed to be the next Eddie Van Halen, Slash and Axl stood out as the next Joe Perry and Steven Tyler, fronting a band that resembled a tighter and harder hitting Stooges. It is this that had given one of the most notorious bands- despite the lineup changes and the albums which debatably never quite measured up- a legacy that is still revered, respected, today with an album that is often hailed as one of the best classic rock & roll records ever. Appetite For Destruction became somewhat of a blueprint for modern rock bands as the American alternative and grunge renaissance of the 1990’s began to fade and rock shifted back to the centre of the spectrum. The primal energy from Duff and Adler, along with the perfectly intertwined guitars of Slash and Izzy, with a tasteful and well placed “fuck off” from Axl led a group of straggly kids into the thrones of rock royalty almost overnight, making the Celtic cross adorned with five skulls one of the most lasting cultural images from the 1980’s. While bands like Van Halen and Mötley Crüe certainly made their mark and created their own legacy of catchy choruses and shredding solos, much of their work sounds as a creation of the 80’s, whereas Appetite For Destruction has earned a sense of timelessness to it. They could float between being gritty and polished whenever it suited the mood while shifting from power ballads- “Sweet Child O’Mine” being the biggest connection between the band and 80’s rock- to punk bangers and classic rock epics; punk rock with incendiary guitar solos and an overt respect for the blues tradition.

To celebrate the anniversary of such an influential record, Guns N’ Roses performed at the historic Apollo Theater; a 15,000 capacity venue. Delivering an intimate and aggressive set that was broadcasted live on Sirius XM radio, the band’s performance was a testament as to why Appetite For Destruction is still among one of the most dynamic, bombastic, and exciting albums ever; an endless reference point for emerging and established bands across the globe and a true cultural milestone in musical history.

A passion for music has always been a part of Gerrod’s life. As a young boy, he was raised on a steady diet of the music from The Chili Peppers, Aerosmith, The Stones, Prince, and others from his mum. Raised in the GTA, Gerrod continued to foster his love for music by attending a wide range of concerts and learning the drums. His unapologetic passion for music has no bounds and has spread to a wide variety of styles, whether it be the 90’s rock that sound tracked his teenage years, the jazz he studied in university, or his newfound love for hip-hop. He recently received his bachelors in music and education from York University and is passionate about writing and reviewing good (and less than good) music. Gerrod is also the drummer and songwriter for a Toronto based rock & roll band, One In The Chamber.
RELATED ARTICLES
appetite for destructionfeaturesguns n' roses
10