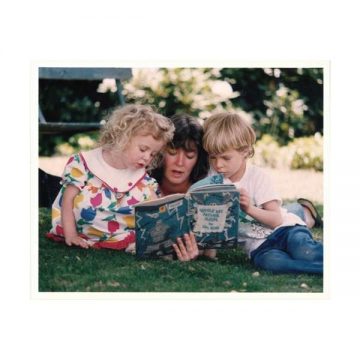 Oh, Rose
While My Father Sleeps
Park The Van Records

One of the joys of music is experiencing another human’s emotions through lyric and song, then figuring out where that fits in your life and how you identify with that art.  This album from Olympia Washington band Oh, Rose will take you down the road of grief in the most eclectic manner possible.

Lead singer and lyricist Olivia Rose pours her heart into this project.  It serves as an homage to her mother who died in 2017.  Rose has stated that it is written in the language of death.  The title of the album refers to a book her mom was writing throughout her life and is seen in the album cover of the release.  Her vocals bear her soul and bring that experience to every song.

The album opens with the dark and moody “25 Alive.”  It is a sludgy, distorted rollercoaster of a song that explores the effects of dealing with a parent that suffers from mental illness.  Each song on the record takes another turn with different emotion and tempo, but the constant is Rose’s vocals.  Solid with feeling.  The album highlight is the song “Easy.”  A radio ready, up-tempo number that comes out of the gate hard and heavy and never lets up.

Olympia has a rich history with bands that push the envelope in an attempt to get their voice heard.  Oh, Rose continues what was laid before them with a solid effort.  While My Father Sleeps deserves a listen.

A native to Toronto, Mark has spent his time on this earth swaying to decades of live music in dark and dirty venues. When not writing or collecting a massive amount of vinyl, he enjoys travelling and photography. His hobbies are tolerated by his lovely, patient wife and beautiful daughter.
RELATED ARTICLES
album reviewalbum reviews
8.0