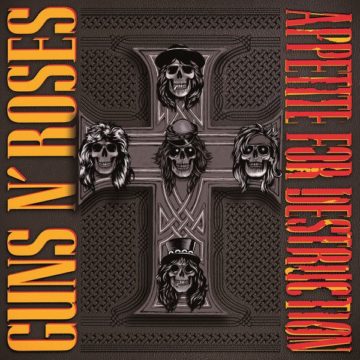 It goes without saying that Guns N’ Roses’ seminal 1987 album, Appetite For Destruction, is a near flawless debut album that set the bar for rock ‘n’ roll bands much in the same fashion that Led Zeppelin had done in 1969. This was an album that changed everything and catapulted the band to unprecedented heights in a very short period, establishing them as the most dangerous band in the world. Even to this day, a whole thirty-one years later, the album is regarded with such reverence and significance that few works are.

Following a monumental reunion in 2016 – while not a complete reunion, it was a feat that certainly seemed impossible for most of my lifetime – the band has been an unstoppable force touring across the globe and have now released a remastered version of their quintessential album. Numerous versions and packages are available with a standard one disc that includes the classic album, a Deluxe Edition that includes a second disc that includes a best of selection from the much larger editions, a 2LP 180 Gram vinyl edition, the Super Deluxe Edition which includes a whopping 51 tracks (27 of which have not been released) – including remastered tracks from their early EP’s and B-Sides and 25 unreleased tracks from their 1986 Sound City Sessions – along with a string of memorabilia and a Blu-ray audio disc with the albums and music videos. The final, Locked N’ Loaded Edition is both epic in proportions and controversial for its price ($999 American) and includes all the music and memorabilia of the Super Deluxe, along the vinyl for the original album and packaged nicely in a stunning leather crate. Thankfully, all of the music can be found on Spotify.

As mentioned, Appetite For Destruction naturally holds up by any of today’s standards musically. What has always surprised me in the past is how quiet the final mix for the original album always was when compared to the other works released from that period – despite all the attitude and raw energy that pulsated through the grooves. Immediately, upon hearing the building riffs of “Welcome To The Jungle”, I was pleased to hear how big the album sounded. This is the most apparent difference between the original and the newly remastered versions of Appetite For Destruction and ultimately – unlike many modern remasters –makes for a more powerful final product.

The B-Sides and EP tracks, while all having been released previously at one point or another – many off of the band’s Lies double EP collection released in 1988 – is an excellent addition to the overall package. Not only does it include classics such as “Patience”, “Nice Boys”, an early acoustic version of “You’re Crazy”, and a cover of Aerosmith’s “Mama Kin”, but it includes other tracks that were released as rare B-sides to international releases, including live covers of Bob Dylan’s “Knockin’ On Heaven’s Door” and a blistering version AC/DC’s “Whole Lotta Rosie”. “Shadow Of Your Love” and a live version of “It’s So Easy” both make appearances here as well, seeing as the band released music videos for both tracks in the last two months to promote the remastered album. While there is not much new here – most diehard fans have heard the rare tracks online before – this is a collection of work that often gets overlooked by Appetite For Destruction and is definitely worth revisiting – if not for “Whole Lotta Rosie” alone.

The Sound City Sessions prove to be just as exceptional as listeners get to peer behind the curtain at some early demos – acoustic, electric, and sometimes instrumental – of the band’s material. Many of the tracks are slowed down (“Welcome To The Jungle” and “Nightrain”) while others such as “Paradise City” and “You’re Crazy” feature slightly different arrangements. This segment of the collection also features never heard songs like “New Work Tune”, “The Plague”, and “Ain’t Goin’ Down No More” along with a hard hitting cover of Elvis’ “Heartbreak Hotel” and an acoustic take on The Rolling Stones’ “Jumpin’ Jack Flash”. Two very early versions of “November Rain” also appear the first being just piano with Axl singing a place holding melody that clocks in at ten minutes, and a second acoustic band version that is half as long. While these may not be for everyone, they certainly illustrate the songwriting process while also expanding the repertoire of Guns N’ Roses at their prime. The recordings may be a touch rough but it adds to the grit, style, and soul that made them the epitome of rock ‘n’ roll.

While the quality of their follow-up double album, Use Your Illusion I & II, is hotly debated between fans, there is no denying the sheer power of Appetite For Destruction. As a debut, there are few that are more impressive; the band defied all odds by taking hard hitting blues with a punk aggression to create an album that is remains incredibly influential in the course of modern rock. Guns N’ Roses have struck gold with Appetite For Destruction, not once, but twice now with this remastered edition that once again solidifies – as if we needed any reminder – just why this is one of the best bands in the history of popular music. From Axl Rose’s screaming howls to the slithery solos of Slash and his chemistry with Izzy Stradlin, along with the brick-house rhythm section that is Duff McKagan and Steven Adler, this is an album that redefined classic in an era when rock was slowly becoming a parody of itself. The additional content makes for a true treasure trove that even the most casual of fans can enjoy while proving to be something much more special for the diehard fans as it gives two albums worth of unreleased content from the band’s golden era, ultimately – despite the outrageous pricing – making Guns N’ Roses’ remastered Appetite For Destruction a perfect collection.

A passion for music has always been a part of Gerrod’s life. As a young boy, he was raised on a steady diet of the music from The Chili Peppers, Aerosmith, The Stones, Prince, and others from his mum. Raised in the GTA, Gerrod continued to foster his love for music by attending a wide range of concerts and learning the drums. His unapologetic passion for music has no bounds and has spread to a wide variety of styles, whether it be the 90’s rock that sound tracked his teenage years, the jazz he studied in university, or his newfound love for hip-hop. He recently received his bachelors in music and education from York University and is passionate about writing and reviewing good (and less than good) music. Gerrod is also the drummer and songwriter for a Toronto based rock & roll band, One In The Chamber.
RELATED ARTICLES
album reviewalbum reviewsappetite for destruction
8.0