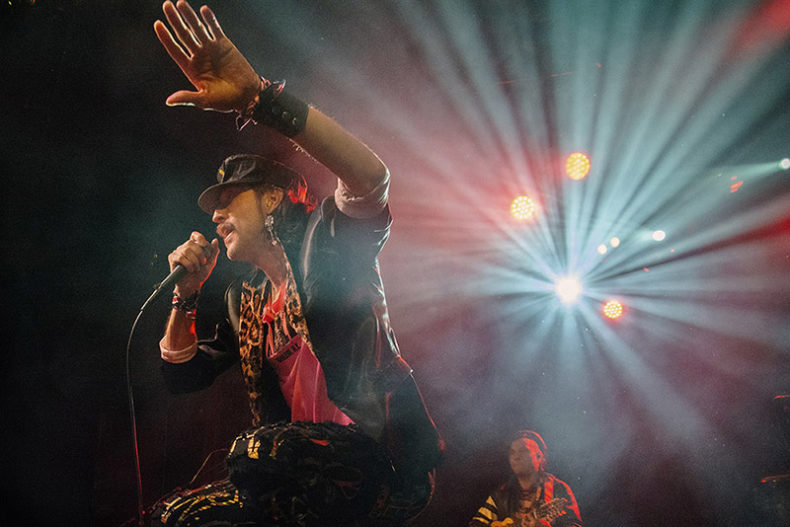 The chanting and foot stomping started early as the second leg of Gogol Bordello’s 20th Anniversary tour kicked off at Vancouver’s Commodore Ballroom. Opening act NuFolk Rebel Alliance warmed up the audience as they trickled in, building in momentum until all the gypsy-punk boys, girls and non-gender specific party people had gathered at the front of the stage. Some had massive dreadlocks, some carried pirate flags, some looked like the unassuming neighbor down the hall, but everyone was ready for the riot that is Gogol Bordello to hit the stage.

The founders of gypsy punk promise to bring “music, theater, chaos and sorcery” to their live performance and the legion of fans that follow the New York band know they accomplish this mission every single time. Imagine if the Clash got together with the Gypsy Kings and their spawn ran off and joined a carnival but then quit because it was creatively stifling, so they formed a punk band. That’s almost exactly what seeing Gogol Bordello live is like.

Front man Eugene Hutz led the frenzied display, which was nearly two full hours from start to finish. They opened the show with a few songs from the back catalog before roaring through “Saboteur Blues”, the first of just two songs from their most recent album Seekers and Finders. The band and the audience revved it up a notch for “Alcohol” at the halfway mark and stayed that way until almost the very end.

They charged into “Start Wearing Purple” at a full gallop, taking everyone at the Commodore with them. To no one’s surprise, “Sally”, came next and the set ended with boisterous fan favorite “Wonderlust King”. The encore was every bit as energetic, incorporating songs that spanned the entire two decades of Gogol Bordello’s notorious reign.

There is artistry at a Gogol Bordello show, a genuine ferocity that powers the performance of each of its members. Although there were fewer rambunctious musicians storming the stage than previous shows, there was still plenty of orchestrated chaos to go around. The magic of it all is what they are really doing, uniting a room full of strangers into a collective, sweaty, dancing mob.

Mariko is a freelance writer and photographer based out of Vancouver, BC. She is a music junkie, an intrepid optimist and a fish taco enthusiast. She lives in a campervan full time and is dedicated to exploring the connection humans have with music and sound via her personal blog Earthly Pursuits. When she’s not at a concert or stuffing her face with fish tacos you can find her outside either near water or in the mountains.
RELATED ARTICLES
commodore ballroomcooking vinylgogol bordello