Live Reviews
146
previous article
SPILL ALBUM REVIEW: HALCYON WAY - BLOODY BUT UNBOWED
next article
SPILL FEATURE: ABOUT THE VIBE - A CONVERSATION WITH TOOTS HIBBERT OF TOOTS AND THE MAYTALS 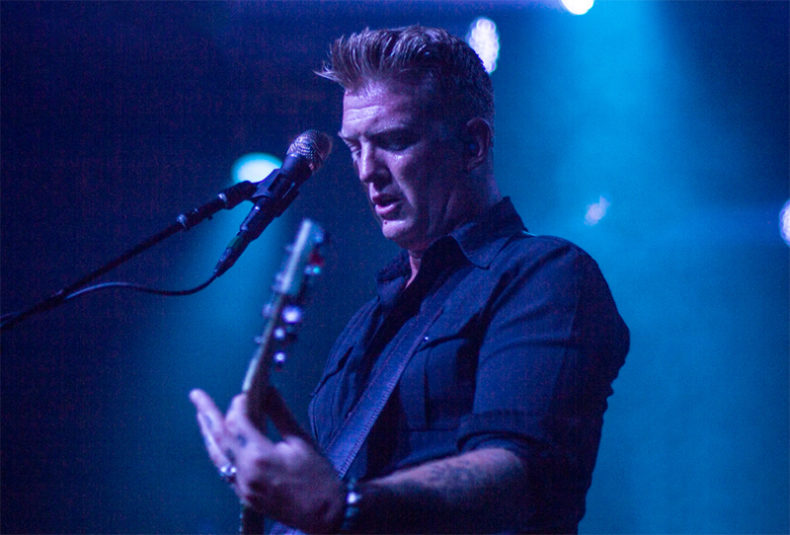 Queens Of The Stone Age w/ Eagles Of Death Metal

Last Saturday, hundreds of Vancouver rock fans were treated to a wonderfully unique event. The Aurora Illumination concerts, an exciting series of exclusive multi-media concert experiences that have been held in every province and territory in Canada, supplied the city of Vancouver with a particularly juicy lineup: the desert-inspired Queens of the Stone Age with their friends and frequent collaborators Eagles of Death Metal, in the city’s most cherished and historic rock and roll club, the Commodore Ballroom.

With a dual heavy-hitting bill, the Aurora Illumination series felt very different from a regular concert; concertgoers all showed up early with a friendly, excited energy. Before doors, Jesse Hughes of Eagles of Death Metal ran up and hugged a fan camped out for a ticket and amicably shook hands with fans in the standby line. Although it is unfortunate that there were many more fans than tickets, attendants who made it in were treated to a particularly memorable night with an extremely rare set of intimate and heavy hitting rock performances. A few gifts, from Aurora, including a blinking colored bracelet, a tote bag, and a water bottle, made an additional generous touch to attendees. Throughout the night, the audience’s wrists flashed in tandem with the music.

Cranking through crunchy, hip shaking riffs, Eagles of Death Metal dealt out nothing but feel good rock ‘n’ roll, preaching fun while blasting through one danceable number after another. Jesse Hughes grew up in the desert, but the man has a particular fondness for the Pacific northwest. Hughes recalled his first Vancouver performance opening for Placebo at the Commodore Ballroom and spent the band’s set preaching the word of peace, love, and death metal. The audience reflected the good vibes right back at the stage. The band, dripping with sweat, brought more than the usual energy. Usually openers do not play to a completely packed sold out crowd, but Eagles of Death Metal sure did, breaking out hard dancing favorites like “Speaking in Tongues” and “I Want You So Hard” to a joyfully swaying Commodore Ballroom.

Queens of the Stone Age, led by Josh Homme, is a hardworking set of rock ‘n‘ roll heroes. Notable for his highly personalized style of fuzzy, thick-riffed pop songs and quirky, trebled melodies and licks, Homme’s persistent musical output has established him as one of the most original and capable guitarists and songwriters of this era. For many die-hard fans who grew up listening to Kyuss and the Desert Sessions, seeing the godfather of stoner rock himself in an intimate setting was a dream come true.

Blending robotic-like guitar riffs, powerful percussions, and sun-drenched desert-penned love songs with a sarcastic sense of humor, Queens of the Stone Age have found a well-honed balance of infectious pop songs, heavy rockers, and surprisingly effective quieter songs. Homme and company dished out a tasteful set of fan favorites from Songs for the Deaf, Era Vulgaris and Rated R. “The Lost Art of Keeping A Secret” made everybody in the place dance.

Breaking into head bangers like the meaty “Misfit Love,” “Turning on the Screw” and the deep cut “Hanging Tree,” QOTSA coolly demonstrated their talent and capacity for special off performances. This unusual evening demanded an unusual setlist, and the band did not fail to show off some of their finer touches, as QOTSA’s musicianship can sometimes be diminished or obscured in the echoey stadiums that their popularity demands. The lethargic, Mark Lanegan penned “In the Fade” sounded perfect.

The exceptionally friendly vibes from an appreciative audience made Vancouver’s Aurora Illumination concert an intimate experience, and one of Vancouver’s best rock shows of the year. Eagles of Death Metal played non-stop rock, and the sonic experience of Queens of the Stone Age in such fine acoustics blows away any stadium. The crowd’s endearing attitude, top notch sound quality, and top-shelf rock acts all defy regular comparison. With the end of cannabis prohibition fast approaching, a new era of live events with emphasis on atmosphere and mixed media appears to be lighting up. Aurora Illumination Concert Series left Vancouver lit up and in especially high spirits.

Queens Of The Stone Age Photos

Queens of the Stone Age Links

The Spill Magazine is a Toronto-based online publication dedicated to covering the independent music scene with a strong focus on our thriving hometown talent. Our writers bring you up-to-date news, in-depth features on musicians and reviews for the latest CD releases. We also travel to the front lines for all local festivals including Canadian Music Week and North by Northeast. Don’t forget to check out our Facebook and Twitter pages for all daily Spill updates.
RELATED ARTICLES
ballad for a common mancommodore ballroomeagles of death metal
8.0