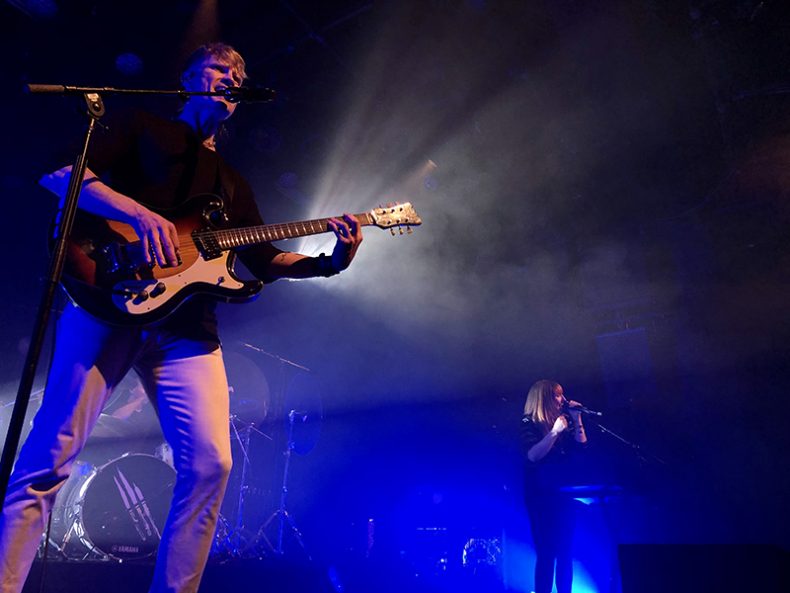 “It feels good to be here,” says Ryan Guldemond, frontman of indie rock band Mother Mother, “Rejoicing in friendship and family and music once again. This time is precious.”

Originally from Quadra Island, BC, Mother Mother have always considered Vancouver to be their hometown. On the opening night of their Inside tour, playing at the historic Commodore Ballroom, this hometown energy is fierce.

The tour opens with a four-night run of shows in Vancouver and the reason is obvious — the Commodore is packed.

The crowd has fantastic energy, constantly cheering, screaming, and dancing. They are profoundly thrilled to be together tonight, celebrating a beloved local band. Mother Mother gives the energy right back, blazing through a catalogue of hits. Despite having released their eighth album Inside in June earlier this year, their setlist is loaded with older, up-tempo songs, unleashing familiar hit after hit on the eager audience.

Sprinkling angelic, three-part harmonies over grimy power chords and a pounding kick drum, the songs flow seamlessly into one another. The first three tracks — “O My Heart,” “Let’s Fall in Love,” and “The Stand” — are played back-to-back as a medley, keeping the energy high.

After five or six songs, Guldemond pauses to reminisce on how far the band has come. The band has been playing shows in Vancouver since 2006, yet Guldemond insists that it never gets old. “It’s never not terrifying,” he says. “It’s always terrifying.”

Yet, stage fright seems an impossibility for Mother Mother. This is a band with obvious experience and they seem deeply comfortable on stage. Guldemond hams it up, leering at the crowd, howling, and flicking his tongue. Bass guitarist Mike Young plants himself in the widest stance possible, while Molly Guldemond and Jasmin Parkin jump onto amps to belt high notes during “Ghosting” and “Hayloft”.

They exude confidence, effortlessly hyping up the excitable crowd. For many I the audience, this may be the first concert they have been to in months or even years, due to Covid-19 restrictions. Some of Guldemond’s statements are a bit Covid tone deaf (“If you see someone who’s having a hard time, give ‘em a hug right now!”), but who can blame them for getting swept up in the moment? It really does feel like we are returning to something that has long been missed.

The lyrics from “The Stand” may have taken on new meaning during the pandemic (“Tell me your fears / Okay, it’s everyone here”). Yet, despite the marked seats and mandatory masks, the night feels free from Covid-19 and the looming threat of variants.

The band seems to recognize this joy of being together again. Guldemond’s energy during “Get Up” is palpable, whipping out gnarly solos and obviously having a blast in stage. The lighting looks great too, from the waves of blue, purple, and gold during “Bit By Bit” to the simple spots backlighting the band during “Pure Love” and “Wrecking Ball,” silhouettes on stage amidst the smoke.

Some moments can only be experienced at a live show. It is in the lights flashing in time to the kick drum, the heat emanating from the stage, and the bass rattling the floorboards. It is in the smiles in the voices next to you and feeling swept up in a collective experience.

Tonight, for Mother Mother and all of the people in the crowd, it feels good to be back.

Kieran Davey is a freelance writer and music enthusiast from Vancouver, Canada. He particularly enjoys alternative rock, groovy hip-hop, and basically any music from the 60's. Aside from reviewing music, he also loves playing guitar and spending time in nature.
RELATED ARTICLES
commodore ballroomlive reviewmother mother

by Mariko Margetson on May 24, 2019
GOGOL BORDELLO @ COMMODORE BALLROOM, VANCOUVER MAY 24, 2019 The chanting and foot stomping started early as the second leg of Gogol Bordello’s 20th Anniversary tour [...]