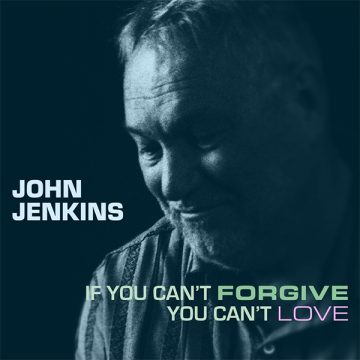 If You Can’t Forgive, You Can’t Love is John Jenkins seventh studio album, and he just keeps getting better and better. Building on the brilliant Growing Old – Songs From My Front Porch (2020), Jenkins has delivered an album that is not so much a continuation of that album but rather the starting point for this one. He continues to progress in writing and performing. If You Can’t Forgive, You Can’t Love has one foot in Americana, and the other in its own distinct world. Much like the great Blue Shadows, Jenkins combines the best aspects of country, Americana, and straight rock/pop. The end result is his own definite style and music and it is wonderful.

The album kicks off with the incredibly melodic and beautiful “A Stranger To Your Heart”, which builds from solo Jenkins to eventually being backed by incredible players. With its beautiful string arrangement, it is absolutely sublime. Jenkins spends a great deal of time crafting lyrics and melodies.

The album, lyrically, focuses on love, loss and nostalgia, or rather memories. Jenkins, with his gentle voice, brings the listener to areas in life perhaps best forgotten but stay with us. Relationships go wrong, people make mistakes, and don’t know how to fix things. One of the highlights of the album is the stunning duet with Alison Benson, on a song she co-wrote with Benson, “Strangers On A Train”. Their voices complement each other and it is impossible to not be moved by their performance.

Elsewhere, Jenkins bravely covers Townes Van Zandt’s “Kathleen”. Townes is an artist who has been covered a great deal but Jenkins chooses a lesser known gem, “Kathleen”, and makes it his own.

The album closes with “Desert Hearts”. It is a beautiful way to wrap up the album. Again, jangling guitars, and an incredible arrangement brings the song to a whole new level. Not enough can be said about Jenkins ability to arrange and produce his songs.

If You Can’t Forgive, You Can’t Love demonstrates the strength of Jenkins’ writing. He is able to evoke emotions and create not only atmosphere but his own world. It speaks of internal and external journeys, leading to many self-reflections. A true artistic statement, and one that I will be playing for years to come. There is so much to discover with If You Can’t Forgive, You Can’t Love, that one spin feels the need to return to it over and over again.

Born and raised in Whitby, Aaron discovered music through his love of The Beatles. This led to a career in radio, writing for various publications, and ultimately a radio show about The Beatles (Beatles Universe), which ran for over four years. When not immersed in music, Aaron enjoys spending time with the loves of his life -- his wife Andrea, and daughters Emily and Linda (all of whom have an intense love of music too).
RELATED ARTICLES
album reviewalbum reviewsfretsore records
8.0