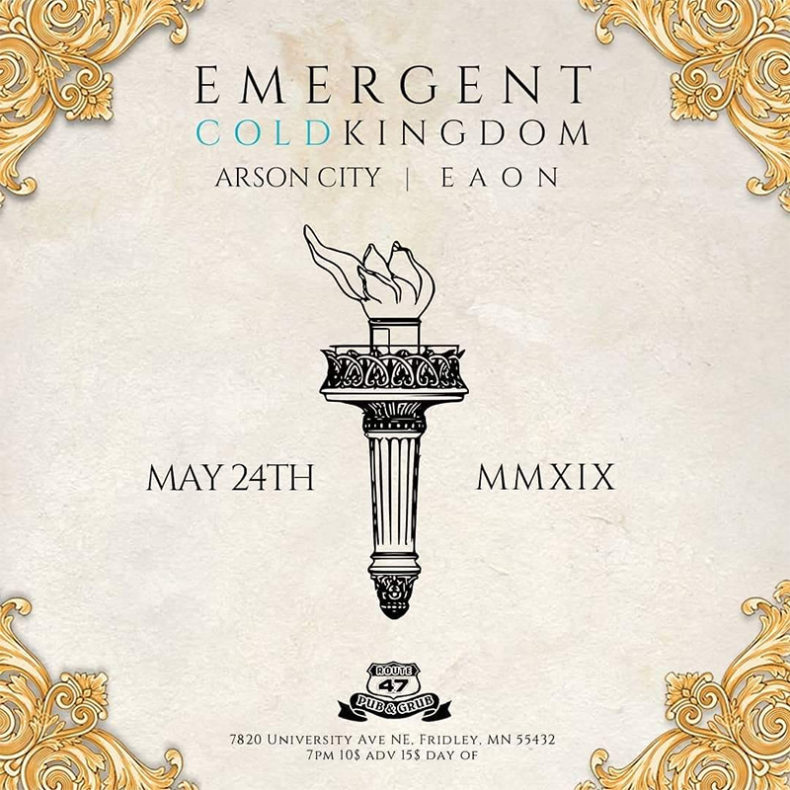 Midwest hard rock fans were treated to an extra special show tonight to kick off the Memorial Day weekend. The show included an album release for Cold Kingdom, and a long-anticipated show by Emergent.

After a thorough sound check, Minneapolis hard-hitting rock trio Eaon began he night. This is a band who hadn’t played a local show since last fall. ‘We’ve got lots of stuff at our merch table, and it’s pretty cheap because, well because we don’t play too many shows!’ Singer Blayne Sovia said with a smile.  People trickled in to fill the venue while the band played their most well-known songs including “Strength to Move” and “Fan the Flame”.

Offering a preview for their next album, they debuted the song “87 Seconds” for which they released a music video for in early May.  Eaon succeeded in getting the crowd warmed up and started the show off on a great note.

Arson City (hard rockers from Omaha, NE) was next, and certainly caught the attention of the crowd with their face paint.  Lead Singer Patrick Wilson, serving as the Mayor of Arson City, sang many of the songs from a podium (often climbing on top of it), as if he were speaking to his fellow citizens. “Hell of a Ride” began the set with some microphone issues which were remedied by the end of their performance.  They slowed the pace a bit with songs such as “One of these days” and “Not Coming Home”. Crowd participation was good with their cover of Journey’s “Separate Ways.”  Wilson took a moment to thank the crowd and the bands they were performing with that night, and expressed gratitude to ‘one of our most favorite places to play.’

The crowd packed in tight in anticipation of Cold Kingdom and the venue almost became uncomfortably warm. Many were curious to hear new lead singer Elissa (pronounced A-lee-sah) Pearson and her husband keyboardist Collin Pearson. Their new album “From the Black Sky” was released that day.

The band began with the lead track off the new album, “Desire” an energetic track that quickly got the crowd going.  Bassist Jason Michael and guitarist Evan Ogaard played fast and furious, jumping and thrashing which fueled the crowd’s enthusiasm. Elissa nailed every song, including the songs from previous albums that were sang by the previous singer. As she belted out the songs one after another, holding those long notes, the crowd erupted in cheers of admiration. “The Break” got the crowd really going with them chanting “we won’t bend til we break, til we break!”  Their set ended with their first single “A New Disaster”. The video for the song has only been out for approximately a month and already has over 20,000 views on YouTube. The band dished out so much energy and enthusiasm that the crowd was eager to give it right back. 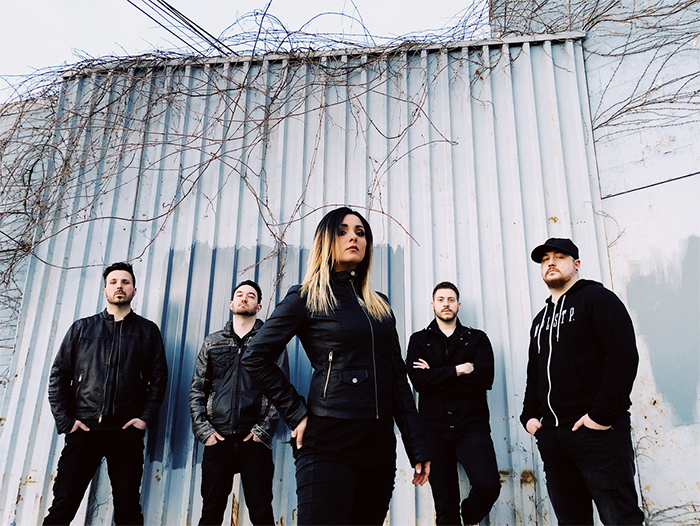 It became evident that many people in the crowd were there to see Emergent based on the response when they took the stage. The crowd pressed the stage even more. With the stage in darkness, the theme song for “Friends” began playing, (causing the audience to instinctively sing along) only to be abruptly interrupted with ominous music. This show featured the original line up of the band. Due to schedule conflicts with their current guitarist, the band recruited original guitarist Aaron Peterson for the show. According to a Facebook post, it’s been over six years since the original lineup played a show together.

Their heavy, melodic sound with catchy riffs and intense drumming kept the crowd engaged. You could feel the bass pounding in your chest as they cranked out the songs one after the other.  As loud as the music was, the crowd singing along with a majority of the songs was predominant.

Singer Aaron Dahl got the entire crowd to participate in singing “Let it Fade” as he paced the stage. He would later climb a tower of speakers and sing a song from the top of them, and later to have a tall aluminum ladder brought out on stage in which he climbed and sang from as well.

“It’s been a while since we’ve played, but you guys are as loud as ever,” he observed.

The band debuted a new song “Plastic People.” The response to it made it clear that fans have been eager for new material. The band was able to work the crowd into a frenzy, with a small short lived mosh pit breaking out.

“Music sometimes comes from places we don’t even know. . . it’s just from the depths of our souls,” Dahl mused later.  “The pain, the struggles, and the good times too . . . but to share it with you guys and hear how you connect with our music- our message . . . man, I’m nobody and you’re here for this show and it’s much obliged.”

Overall, the crowd stayed energized through the entire night, with each band bringing their own unique sound. Not only that, but the support and respect the bands had for one another was evident in their willingness to help each other set up and take down of equipment and spoke highly of one another. Band members were easily accessible after the show as they mingled with fans at the merch tables. An impressive performance by every band, leaving the fans eager for more.

Trista’s a music addict who’s taste in music spans over numerous genres. She enjoys playing her bass guitar, but honestly she’s not very good at it. So she goes to concerts and watches real musicians who are far more talented than her. You’ll find her there in the front row, because, well, she’s short and wouldn’t be able to see the stage very well otherwise, and because she strives to get the perfect photo to capture the experience.
RELATED ARTICLES
a new disastercold kingdomlive review
8.0