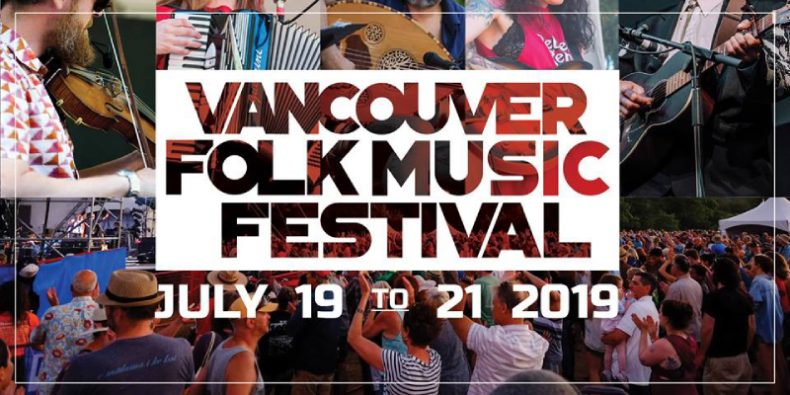 Now in its 42nd year, the Vancouver Folk Music Festival continues to impress. As a Canadian cultural institution, “it is a unique community-based celebration internationally renowned for presenting the finest traditional and contemporary folk and roots music from around the world.” The family friendly and wholesome atmosphere mixed with eclectic audience members, lends to a visceral experience. What could be better than having beautiful world music, culture, smells, sights and the Pacific Ocean all in one place?

Walking through the vast festival grounds, we encountered community organizations, artisans with intricately handcrafted pieces, market vendors – some that even had instruments to test out, face painting, food trucks, kids activity zones, and the folk bazaar. The Artistic Excellence, Diversity & Inclusiveness, Environmental Stewardship, and Social Justice initiatives were wonderfully apparent at the Vancouver Folk Music Festival. Everywhere you looked, there was a team of dedicated volunteers working hard at maintaining a clean, safe, accessible, and welcoming atmosphere. The Vancouver Folk Music Festival app made the experience easily navigable, providing users with the live schedule and map of the festival grounds, along with other useful tidbits.

A representative from Hollyhock, a campus on Cortes Island that offers programs and conferences to help connect to self, nature, and community, shared some of his experiences; “I love how inter-generational this experience is. People have been coming to this festival for so many years – it really is a summer institution. Parents who were once brought by their parents are now bringing their kids; it’s an endless cycle. The beauty of being here with Hollyhock is the same concept, in that it is part of an incredible legacy.”

Audience singalongs were a huge part of the festival – with artists engaging the crowd and really amping up the energy and dancing. Harmonies filled the air and performances continued to wow festival-goers such as Riley; “I enjoyed the wide variety of artists here that I wouldn’t necessarily be exposed to otherwise. I typically wouldn’t find or listen to Spanish or Cuban inspired types of music. Switching stages was always exciting because you’d always discover something different.”

Matthew Byrne brought soulful a cappella melodies into the festival mix. His latest album, Horizon Lines, was named 2018 Traditional Recording of the Year by the Canadian Folk Music Awards. Bryne’s storytelling aspect, paired with his powerful voice put the audience in a state of awe and enchantment. “I see songs as sources of the past – windows into my own family history. Traditional music has always been the most important tool for me to understand where I come from and who I am. My live performance is meant to bring audiences on a journey through the lineage of my repertoire and share what these songs have revealed to me.”

Locarno, the Latin project of JUNO Award winning musician, Tom Landa, got the crowd grooving to music with influences  from Columbia, African Sukous, Mexican Marimba Music, Venezuelan Joropo and Brazilian Forro Music. The band includes Tom Landa on jaranas and guitars, Kalissa Landa on violin, Robin Layne on marimba, congas and timbales, Pedro Mota on guitar and vocals, Aaron McKinney on bass, Liam MacDonald on drums, congas and pandero, Mark D’Angelo on trumpet and Nick La Rivere on trombone. The band touched upon topics of immigration and travel, tying in the politics of Canadian and Cuban relations and how lucky we are to be where we are. It was incredible seeing people being so open and receptive to honest conversation.

JUNO nominee Klezmer and Balkan-inspired band, Oktopus, graced us with its 8 piece tentacles. Made up of harmonious valves, keys, bows, and percussive elements, the band brought nostalgic joy through their song arrangements. Interpretative dancing took place next to stage while Oktopus played a range of classics like Hungarian Dance No.5, later incorporating traditional Greek songs, and even weaved in some Tarantino-influenced transitions. To end off the set, the band amused us all by playing Black Eyed Peas – Pump It as a Balkan style rendition. All band members jumped and danced on stage, getting everyone in the audience to join them with high energy. Founder of the band, Gabriel Paquin-Buki, commented, “We had an awesome experience! The organisation, the volunteers, the crowd were all so respectful and dedicated. We had a lot of fun in the workshops. It was kind of a music clash to play while Dwayne Dopsie & the Zydeco Hellraisers were on at the same time because of their instrumentation, their style and their energy. But again, very fun. Lots of great musicians!”

The Main Stage featured 2018 Grammy award nominee for Best Regional Roots Music Album, Dwayne Dopsie & The Zydeco Hellraisers. Their music stemming from New Orleans filled the ocean air with funky Louisiana grooves; particularly when they brought their set to an end with “When The Saints Go Marching In,” while festival-goers stomped and clapped along. The rhythmic blues, funk, and soul left the crowds howling for more! Soon after, Desiree Dawson’s stripped down set captivated the audience, making everyone swoon with her perfect harmonies. Her heart-warming, soulful folk set had a very India Arie vibe.

Zaki Ibrahim’s performance on Stage 3 blew us all away. South African-Canadian singer songwriter, blended r&b, soul, and jazz, could easily take the main stage in the very near future. The back-up vocalists and dancers, drum pads, synthesizers, killer outfits, and of course Ibrahim’s presence, had the stage glowing with beauty. The aesthetics were perfect, Zaki’s vinyl-inspired hat, and the coordinated fiery dance moves had everyone’s jaws on the floor.

Savannah, a long-time Vancouver Folk Music Festival-goer shared, “I didn’t know what to expect, but I didn’t think it would be this unreal this year. There hasn’t been a single band I heard today that I didn’t love! There’s so much energy, and overall feel good vibes. Every band had something unique to bring; there is just so much talent and joy in their songs.”

Rebirth Brass Band, formed in 1983, evolved from playing the French Quarter in New Orleans to world festival stages. The band blends traditional brass instrumentation with funk and hip hop, creating a signature sound. Glenn Hall was specifically pointed out, as he is just 17 years old and has been listening to this style of music since age three! Originally a trumpet player, he took the role of playing the snare drums with the band at Folk Fest. Their Grammy Award-winning album, Rebirth of New Orleans, followed by Move Your Body, carry the heavy funk sound that gets everyone dancing. The Rebirth Groove chorus was sung by audience members, echoing the singing and clapping along to the percussive beats.

David Hidalgo performed a special short set with Steve Dawson that brought a beautiful Latin American flavour to the stage. His band, being of Mexican-American descent, said that they never thought they would end up playing the traditional music of their parents and grandparents. Instead, they listened to AC/DC. But here they were, standing proudly and performing songs that brought them back to their roots – songs such as La Iguana, El Cascabel as well as songs from the Los Lobos album La Pistola y el Corazón.

The Hamiltones are a Grammy-nominated soul group from North Carolina. Their soulful harmonies from the trio of vocalists, J. Vito, Tony Lelo, and 2E, were dynamic and rhythmic. The crowd swayed to the grooves – and Spill Magazine had the opportunity to chat with Kevin, who shared his appreciation for The Hamiltones, having seen them at last year’s Vancouver Folk Music Festival. I saw The Hamiltones last summer and love their vibe so much! You just look around and think you’re in heaven with this music. Especially in this setting with the scenery, diverse audiences, everything is perfect!”

This festival is such a refreshing experience in Vancouver. The opportunity to hear music from all over the world with the calibre of the musicians this year has been a real treat. Gary kindly gave us some insight; “I’ve lived in Vancouver for the past three years, and each year, I have attended Folk Fest. The combination of great music, local vendors, happy people, and the perfect setting of Jericho Beach creates a vibe that feels truly Vancouver. Folk Fest feels like a community that gets together each year, and I’m excited to be a part of it for years to come.” Expectations have certainly been exceeded, and the Vancouver Folk Music Festival values have shone bright. See you there next year!

Originally from Toronto, Giselle is exploring the worlds of entertainment and social change through a musician's lens. With a background in Environmental Studies and Music Business, she works to establish her own voice in the music scene.
RELATED ARTICLES
festivallive reviewvancouver