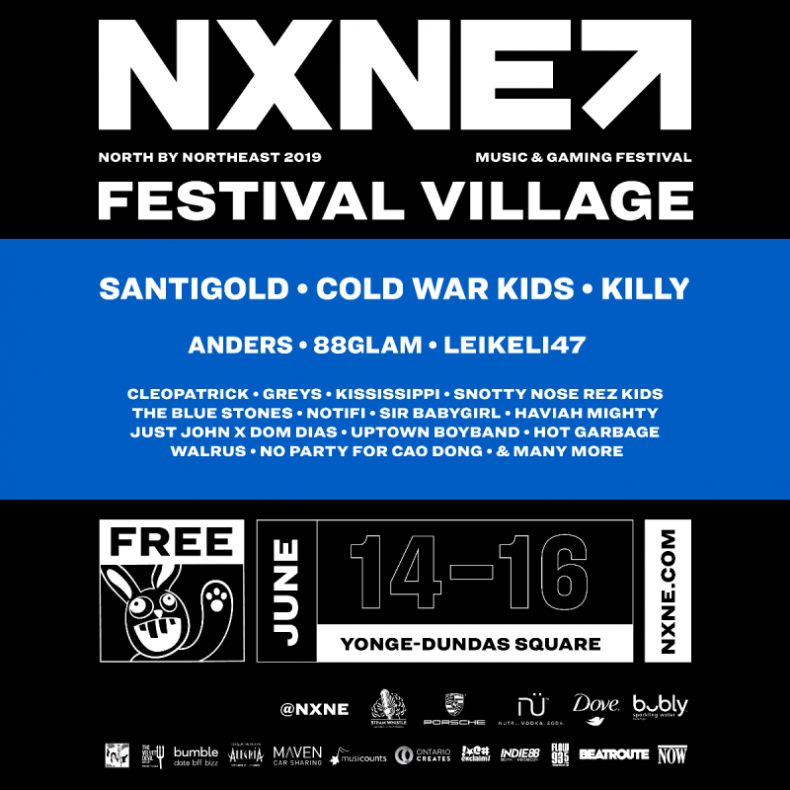 Time for the latest Spill NXNE installation — our writers and photographers are ready to bring you the best-of-the-best from this year’s NXNE Festival! This year the NXNE Festival Village focused acts presented at Toronto’s famous Yonge-Dundas Square. Check out what the Spill team has to offer!

Killy’s epic finale to NXNE 2019 may have been the most anticipated NXNE hip-hop event ever. The Toronto rapper’s cult fanbase is eager to see him perform wherever he goes and thus NXNE was no exception. Prior to his set even starting, one could tell that this was the event of the night, the biggest takeaway of the festival, and the one event nobody would want to miss. Yonge and Dundas Square started to pack up an hour prior to his set, and eager chants of “Killy! Killy! Killy!” would often overpower the DJ set. When the clock finally hit 9:15, the humming buzz of “Surrender (Intro)” started playing as Killy came onstage.

Initially however, Killy’s energy did not appear to reach level of the bar the he has set himself to as a performer. Perhaps this may have been due to the outstandingly high energy of the NXNE crowd, but for the most part he walked back and forth for the duration of his intro. However, by the next couple of songs (namely new hit “Swag Flu”), he found his energy and returned to his usual stage jumping and mosh pit inducing antics. Once he was able to find his energy and surpass this initial “slump”, his set went from good to amazing. Killy was giving it his all and the crowd kept getting louder. This set an interesting premise for the night; upkeeping a lively atmosphere.

His set was also cleverly put together as it included fan favourites such as “Deadtalks”, and seamlessly transitioned to songs off his latest project Light Path 8, which dropped little over a week ago. Despite the recency, fans still sung along to new tracks such as “Simulation”, showing their dedication to the artist.

Killy even stage dived and surfed the crowd for a good portion of his set, truly connecting with the audience. It is also important to note that Killy is currently on tour with artist Nav right now, therefore, coming back to his hometown to perform a FREE show at NXNE’s Festival Village is a truly class move by Killy.

Ultimately, once Killy was able to find himself and display his usual stage antics through amazing energy, substantial movement, and a sonically great stage performance, this became without a doubt one of the best performances of NXNE 2019.

Over the course of the past couple of years, anders has proved himself to become a top-tier R&B singer. Once his entire NST team touched the NXNE stage and set the vibes for anders to come, one could tell that the atmosphere of the crowd was changing – as it began to shift from nonchalant music fans to members of anders’ dedicated fan base ready to experience him live.

Ultimately anders’ performance lived up to the precedent he has set. On top of preforming an extensive genre-bending catalogue of hits – including hard hitters like “Bad Habits” and slow ballads like “Rain”, anders genuinely gave it his all. Frequently interacting with the crowd, checking the tone of the audience, and continuously rapping/singing with a live band, anders was able to convey his talent to the audience. This made for a great second last performance to NXNE’s final day of Festival Village.

June 15 saw the NXNE crowd fairly vacant – due to the gloomy and overcast weather – until the arrival of fan favourites 88GLAM. Once the time hit 7:30 – exactly thirty minutes prior to the duo’s set – and the crowd started to fill up, it was no surprise who they were anxiously waiting to see.

The fan favourite duo consists of 88Camino and Derek Wise, two members of The Weeknd’s XO who bring outstanding energy, melodies, and hard-hitting verses. Seeing the duo perform live makes it easy to understand why The Weeknd – one of the world’s most influential musicians – decided to sign the duo into his family-oriented brand/label.

The crowd was absolutely loving every second of the show, especially when crowd favourites such as “Kyrie” and “Baby Bro” came on. Where most musicians have trouble matching the sound of their recorded music to their live performances, this NXNE performance set a serious contest to whether 88GLAM sounds better recorded or live. There is something about the way that the duo utilizes live auto tune microphones – akin to that of musician Travis Scott – that synergizes the perfect amount of distortion and melody to provide a trance like sonic experience like none other. Furthermore, 88Camino even jumped into the crowd providing front row fans with an experience to truly remember.

Ultimately, NXNE made an amazing choice by selecting 88GLAM as one of their main performers for festival village as they certainly did not disappoint. Kudos to NXNE as closing off June 15 with 88GLAM was a great decision to set the tone for the final day of festival village.

The Spill Magazine is a Toronto-based online publication dedicated to covering the independent music scene with a strong focus on our thriving hometown talent. Our writers bring you up-to-date news, in-depth features on musicians and reviews for the latest CD releases. We also travel to the front lines for all local festivals including Canadian Music Week and North by Northeast. Don’t forget to check out our Facebook and Twitter pages for all daily Spill updates.
RELATED ARTICLES
88glamcold war kidsfestival
4.0

by Jonathan Hazlewood on November 16, 2018
88Glam 88Glam2 Republic Records Derek Wise and 88 Camino have released their sophomore album, 88Glam2. Following the impact of 88Glam1, the duo returns with more of its signature dark bangers. The [...]