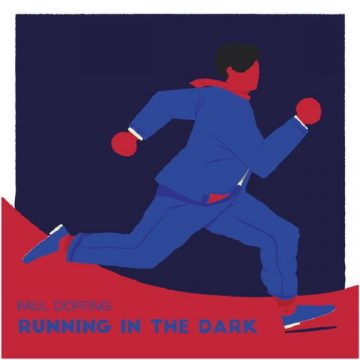 It is very easy for singer/songwriters to fall into the ‘my pains’ musical compartment. That is the one where the artist picks up his or her acoustic guitar, starts strumming it slowly, and starts singing about whatever romantic irk he or she had that morning, yesterday, or the day before. Suddenly that thin musical compartment literally turns into a glove compartment that you probably wouldn’t be able to fit just a pair of ladies’ gloves into.

On the other hand, to stretch out and widen your perspective, both musically and lyrically, you need a bit more talent, and to eventually move a bit out of your backyard. Based on Running in the Dark, American singer-songwriter Paul Doffing has the talent and has also gone a bit out of the ‘standard’ singer-songwriter domain. He has completed nearly 13,000 miles touring on a bicycle through the US and seven other countries, and spent two years in Central America and Europe.

This widened perspective shows on this album. Musically, it ranges from fast-paced opener “The Fragile Modern Day” and “Running In The Dark”, to countrified Neil Young-inspired “Renegade Heart” and “Another Winter Day”. But then it is the true singer-songwriter matter, where Doffing shows what he is really made of, the acoustic ballad, and “In Your Eyes” is a song that should end up on anybody’s late night playlist. Pick either the longer or the single version, or, preferably, both. A quiet surprise of an album.