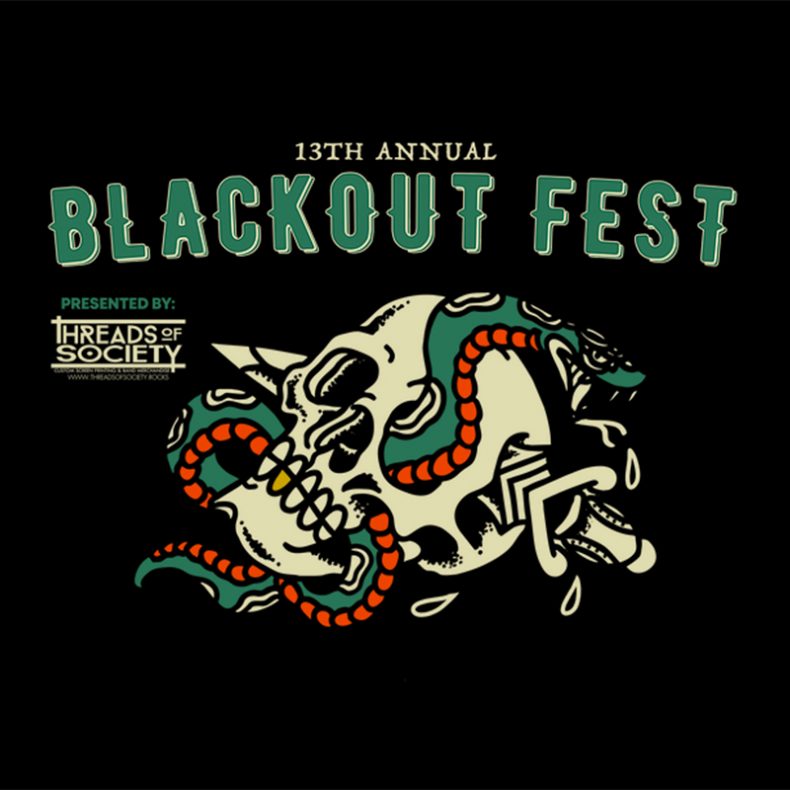 Check out the Spill Magazine coverage of the 2019 Blackout Fest in Brantford, Ontario!

It’s Friday the 18th of October, aka the first day of Blackout Fest 2019. This festival is a haven for fans of all things punk, as bands from across North America meets to jam it out in Club NV, The Marvellous Lounge, and Two Doors Down in downtown Brantford.

PLANTS open on stage 1  in NV and the bowl soon start filling up to the sound of grounded vocals, sci-fi riffs, completed by a sick isolated bass solo. Vegans of the punk scene rejoice. The eerie silence I was expecting between sets is interrupted by the sound of Holy Smokes.  Stage 2 is intimate, which matches the low and sultry voice of the lead singer.

With the two venues and a fair walk between each, there’s a sense of urgency when you’re trying to get the timing right. The Late Kings start un-royally vibrating through the tin can that is the Marvellous Lounge, with low gravely vocals and frazzled instrumentals. Suddenly, it’s 2003 and The Beach Boys have washed up after a bender, to find that their great-great-great grandkids have formed The Antisocial Surf Club. With covers of “Bowling for Soup”, and “Walk The Moon”, among originals that I swear pine for Blink 182’s “Josie”, I think I’d rather stay in the early 2000s.

Can’t stay at the beach forever though, but thankfully the energy flows back to Club NV with The Barrel Rejects. Luckily for the crowd, they don’t belong in the barrel, and with a heavier sound and heavier power-stances, they bring a grungy tone to the scene. I think the party is getting started.

Back over on stage 1, school is back from summer, and so are The Skraggs (sorry, I’m not sure if it’s “the skraggs” or “the mother-fucking skraggs”). The lead singer’s mom keeps them topped up with drinks on stage, and they have their own homemade banner which makes their stage presence feel like a high school bake sale, so please, take all my money.

The Bonnavilles steer straight in after the last note of The Skraggs, although their instrumental is louder, their vocals are airy, and their screams are in harmony, which creates a choral sound. You know when it’s 2am and “Wonderwall” comes on and you can feel your scream go into a dark and drunken abyss? This is it, only with The Bonnavilles it’s 10pm, and Club NV is still only half-full.

The bonus of a small crowd means zero lines, so at least there’s no waiting at the door when you get to the next venue. On return to The Marvellous Lounge, UP NORTH sound like they indeed, went up north, found a bear, and asked: “what does a bear trap feel like?”. The answer, in a long and drawn out rumbly growl, has the general consensus of “fuck”. Coming back down south, Bad Buzz, takes a heavy bass line to send us out of the woods with tip-toe-bopping into the middle of the road with a 2006 punk drop out the sound.

Dropping out to NV takes us to The Anti-Queens. It’s like a live showing of ‘girls to the front’, only the real action is in the back with a treasonous drum solo. I’ve never wanted to be a riot grrrl more in my life, and this seems to be mirrored in the crowd as the energy peaks with the amps at 11.  With another perfect transition between stage 1 and 2, Soft Limits pull us back down into a lullaby of guitar lines that sends you into a nightmare with vocals that are anything but soft. With a back-to-back of these bands, Friday night of Blackout Fest reached its headlining event early.

Having only been away for an hour, the Marvellous Lounge transformed into a truck stop. Trucker meets punk rocker embody the core of Space Weather. Minus the repetitive screaming of a vocabulary that only contains two words, “fuck you”, the guitar track is wholesome sounding. Their energy is unmatched by the calming feminine voice of The Culture Crooks that ends up calming me down, and they seem to calm the rest of the crowd too as only two are left headbanging in the centre of the bowl. This doesn’t last for long though.

If I thought Space Weather were other-worldly, it was only because I was yet to hear Welland Wasted who started their set with “fuck, fuck, fuck”, aptly lowering the bar to their tone. It’s as thrashy as it is trashy, I think the music itself is wasted.

The issue with two venues being far away from each other splits the headliner crowd. I stay at NV, with 24 other attendees, for Direct Hit!. In a classic Direct Hit! style, they start quietly with “Welcome to Heaven” before spiralling us into a screamo hell that leaves the first night of Blackout Fest in ashes. 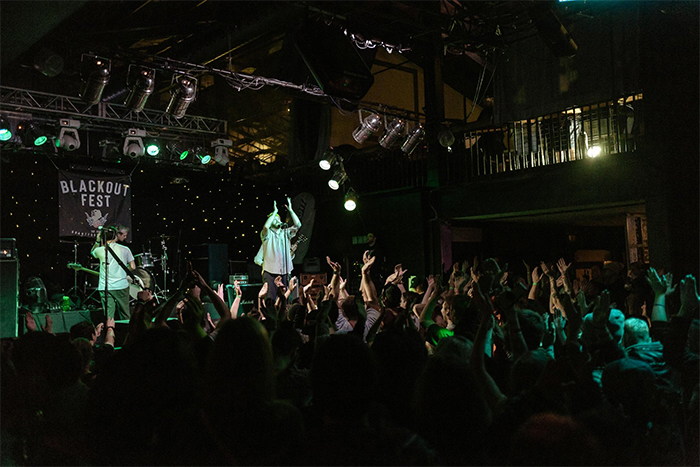 Day Two starts at noon, and with the low attendance last night I was interested in what the small main drag in Brantford would look like. Summing up these feelings, Nothing Special ramp up the pop-punk with some pretty wholesome sounding Cali-surf vibes. In All Fairness come crashing in with shouty vocals and movement to stir it up what Nothing Special had sat out.

An extra venue has been added in lieu of the second stage at the Marvellous Lounge, Two Doors Down is a small venue a good 15 minutes’ walk away from the two other venues. Although it’s far and arguably unnecessary — just have the marvellous second stage open, like last night — the bar itself is a small venue that carries a lighter, hipsterish vibe. There There open to what finally feels like a close-to-full venue with more tip-toe-bobbing, and although their drums are heavy, everything else stays mellow.

The trek from Two Doors Down brings us to Telltale who are full of the skater-boy punk vibes that everyone and their inner Avril Lavigne loves. The lead singer hypes the crowd up to a level that remains consistent over the next bands Hesitate and In Case We Crash. The low and earthy tones of Hesitate are screamed over as if they were the ones about to crash. In Case We Crash have accepted their namesake with a tight melody that along with their harmonizing creates a fresh and enjoyable sound, they said it best themselves by leading with the words “this is a groovy one”.

Heading back up to Two Doors Down, I open the door (literally – the door is on the stage) on Coming Clean. It’s a lil’ thrashy, and in the small venue the lead singer moves to and from the stage making the entire venue himself with a cover of New Found Glory’s “My Friends Over You”, and honestly I don’t think I’ll get over them. Another thing I won’t get over from this set is The Same As Always lead guitarist’s bright pink and paisley patterned guitar ripping out even prettier riffs.

The 15-minute walk back from Two Doors Down is a chore but The Boys Of Fall make it worth it. If they had a CD with just their soundcheck on it, I’d buy it. The wild contrast between soft vocals and an airy scream is complemented by beautiful guitar, bass, and drum tracks, and completed by synchronized jumping. Although the bowl is only half full, their stage presence alone makes up for the other half of the crowd.

Back at the Marvellous Lounge, and it seems like this is the place to be. Young Culture are onstage with a groovy drum beat that’s laid over with soft, full-bodied vocals. String vocals bleed into the next set with Carried Away with a strong female lead, giving us more of the queen vibes.  The Inclines continue to move the crowd with their wholesome, tight sound and fun voice-over tracks.

The majority start to stream over to Club NV again, where the most chill, yet bad-ass band, Fortune Cove have created a pit of heavy energy to get everyone pumped up for the next couple of hours. The Wildhood carry a muddy tone to them, although not being sticks in the mud their set is full of crowd participation as the night starts to rev up with high-speed energy. They choose to slow it down though with acoustic track “losing sleep”, this comes in as a refreshing change of pace. There’s no slow pace with Like Pacific though as they get straight to it with help from the crowd who sing, mosh, and surf. To be expected from Like Pacific, the atmosphere is boisterous, as is the music, with the echoed mic. A sign of things to come for Moore Ave Underground and headliner, Seaway.

Moore Ave Underground keep the tempo up and lead us into what’s to come with Fall Out Boy cover “Sugar We’re Going Down”.  Headliners Seaway characterize the festival with their inclusive, fun-loving, wild personality. It’s this personality, paired with the great music by talented musicians, that make punk shows what they are – just ask the crowd surfers – a fucking good time.

The Spill Magazine is a Toronto-based online publication dedicated to covering the independent music scene with a strong focus on our thriving hometown talent. Our writers bring you up-to-date news, in-depth features on musicians and reviews for the latest CD releases. We also travel to the front lines for all local festivals including Canadian Music Week and North by Northeast. Don’t forget to check out our Facebook and Twitter pages for all daily Spill updates.
RELATED ARTICLES
bad buzzdirect hit!festival
8.0