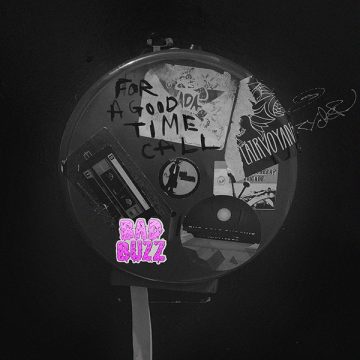 Sporting a new lineup, Toronto punk rockers Bad Buzz have returned since their 2019 studio EP, Try Harder. Following a trio of singles released in the first half of this year – “Carousel”, “A Million Things”, and “Oxygen” – the new three-piece outfit has dropped their second full length album, For A Good Time, Call, marking an exciting new chapter for the band.

Opening with the lead single, “Carousel”, Bad Buzz are in fine form as they transition from a heavy, off-beat, and dissonant intro into a melodic pop punk verse and chorus. Vocally, the track soars with the use of lush harmonies and an overall tone reminiscent of early Blink-182. Stylistically, the following song, “And I’ll Wait For You”, continues to build on a rich influence of ‘90s pop punk, only this track captures an anthemic vibe nostalgic for Warning era Green Day. The track shines in particular for its larger than life chorus and the dark turn the band takes at the bridge section.

The remaining singles – “A Million Things” and “Oxygen” – only further this notion as Bad Buzz double down on the ‘90s punk vibes. The former takes the shape of a melodic pop punk banger in the truest form while the latter is a pure explosion of uncontrollable energy spare a moment or two where the band relents into an arpeggiated and melodic refrain. “Oxygen”, with its rhythmic bridge and solo section is one of the best tracks Bad Buzz has to offer on For A Good Time, Call…. Beyond the singles, the mid-tempo rocker “You Set Me On Fire”, the driving “Down The Nashwaak”, and the hard hitting “Rest Well” are additional highlights on the album.

Over the course nine songs, Bad Buzz affirm themselves as one of the hottest pop punk bands to come out of Toronto. With a new line up, and a more focused, melodic, and cohesive sound, For A Good Time, Call… sets Bad Buzz apart from their contemporaries while ushering in a new and exciting sound for the band. After numerous releases over the course of the last four years, it feels as though Bad Buzz have found their sound on For A Good Time, Call….

A passion for music has always been a part of Gerrod’s life. As a young boy, he was raised on a steady diet of the music from The Chili Peppers, Aerosmith, The Stones, Prince, and others from his mum. Raised in the GTA, Gerrod continued to foster his love for music by attending a wide range of concerts and learning the drums. His unapologetic passion for music has no bounds and has spread to a wide variety of styles, whether it be the 90’s rock that sound tracked his teenage years, the jazz he studied in university, or his newfound love for hip-hop. He recently received his bachelors in music and education from York University and is passionate about writing and reviewing good (and less than good) music. Gerrod is also the drummer and songwriter for a Toronto based rock & roll band, One In The Chamber.
RELATED ARTICLES
album reviewalbum reviewsbad buzz
8.0