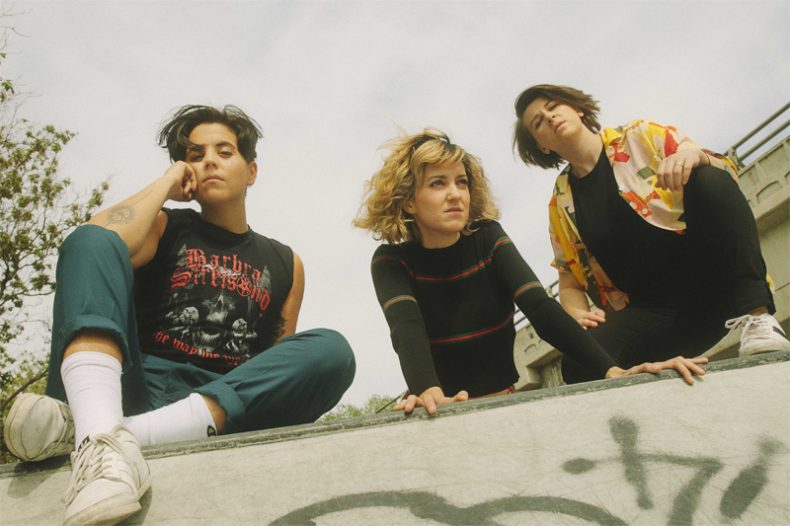 OUR EYES WILL BLEED FROM THE LED

A CONVERSATION WITH MICHELLE BENSIMON AND ISABELLE BANOS OF CAVEBOY

Michelle  Bensimon and Isabelle Banos of Canadian all-female indie pop trio Caveboy grew up to the sounds of Fleetwood Mac and the melody of The Beatles, and it is the sound of the great rhythms of the ‘60s and ‘70s that underpins the tracks forming their debut album, Night in the Park: Kiss in the Park.

Lead singer Bensimon has one of the best vocals in the up and coming indie scene. She aptly describes her voice as a mixture of Cyndi Lauper and Carlisle, and the band draws from the beat of the greats such as Queen and Prince, giving this young band a surety of who they are; standing on the shoulders of giants.

Each of the band members are songwriters, and they value the hooks, enjoying the essence of a bridge and exploring the chorus. For anyone who hasn’t yet heard the band , Bensimon and Banos suggest checking out “Silk For Gold”, a track with “great intro, heavy guitar, strong bass line, high production and strong lyrics.

The strength of the chorus hook in the singles is evident, and Caveboy has a clear song structure of verse and chorus songwriting, backed with the guitar riffs and really solid vocals. The album will make waves and there is a growing audience out there listening. 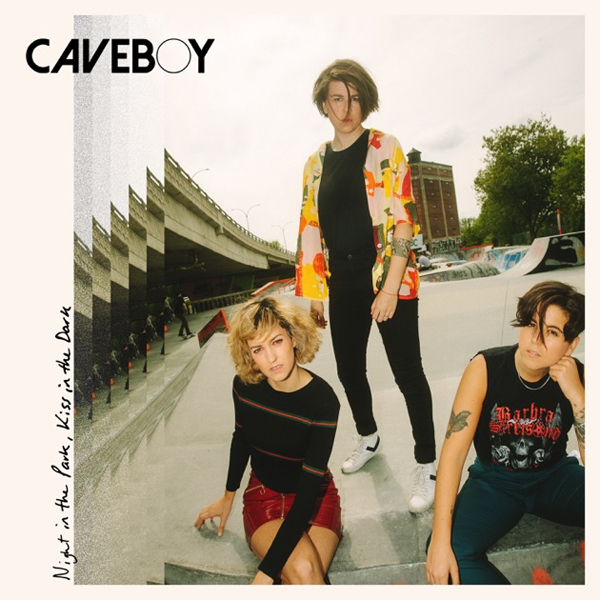 NIGHT IN THE PARK, KISS IN THE DARK ALBUM REVIEW

For Caveboy, a European tour is now very much in the works, and with digital streaming the force behind a new generation of European fans desperate to bring them over. The band is passionate about its live show and has been working hard on their production live. “It’s a special time, a time to walk out and have fun.” They want to create an experience where the fans bring their friends to an event, and all parts are together, the merchandising and the music in one, with the band keeping close attention to what is put out in its name. Their branding is infused in things now and a range of items are available on the website.

Caveboy has been out on the road, headlining smaller events and also opening for established acts such as Wintersleep. Their live sound is held by the fact that each member plays a range of instruments, fitting comfortably as a three-piece. Providing the rhythm are the drums of Lana Cooney, “hands on with the instrumental parts”, which melodically lifts the sounds. The drums are “into her brain” as she keeps the live tempo tight.

For fun, the band has some great ways to wind down between shows. Bensimon is a huge fan of the television show Survivor, even once auditioning to get on. Banos is a board game geek, and has developed DIY escape rooms in her house, which may explain how Caveboy created an online escape room game on their social media channels. In promoting “Hide your Love”, the opening single from the album, the band delivered to the participants daily clues to the puzzle, and as each clue was solved, part of the song was delivered. It makes discovering the band fun, and this is a group aware of how to generate interest and media columns.

Caveboy has a busy year ahead, a first album released and which is available in more than just one format. Caveboy, which as a name connects to “nostalgia, discovering the world, early human beings”, is also releasing the album on vinyl, a “still exciting” medium for all those who love the sound of a needle hitting the groove.

In 2020 a busy year awaits for Caveboy and for those following them. They are heading out on tour to New York and to Europe, and exciting times are on their way. Although the girls are playing to a few thousand now, they have the talent to be a regular feature on the upper billing of festivals and arenas in the very near future.

The Spill Magazine is a Toronto-based online publication dedicated to covering the independent music scene with a strong focus on our thriving hometown talent. Our writers bring you up-to-date news, in-depth features on musicians and reviews for the latest CD releases. We also travel to the front lines for all local festivals including Canadian Music Week and North by Northeast. Don’t forget to check out our Facebook and Twitter pages for all daily Spill updates.
RELATED ARTICLES
caveboyfeaturesnight in the park kiss in the dark

by SPILL NEW MUSIC on February 6, 2021
CAVEBOY SHARE NEW SINGLES “DIRTY HANDS” & “GOOD IN YOU” INDEPENDENT Montreal’s Caveboy celebrate the one year anniversary of their [...]
9.0