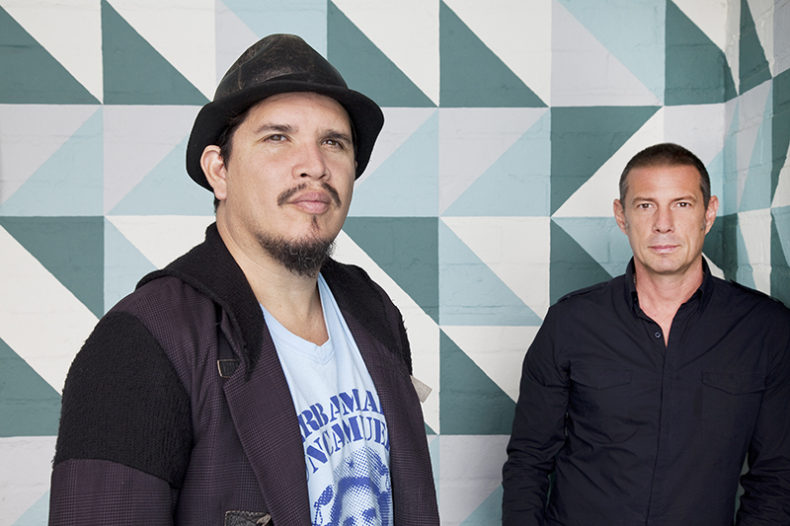 MUSIC THAT MAKES YOU THINK

AN INTERVIEW WITH ROB GARZA OF THIEVERY CORPORATION

Rob Garza and Eric Hilton have been making music as Thievery Corporation for over two decades. They’ve done it all while sticking to their influences and what they believe in. Their career spans 9 studio albums that bend and warp through hip-hop, jazz, classical, Middle Eastern, electronica and dub (just to name a few). Somewhere in between touring with his 20 piece band, owning clubs in Mexico and raising his son, I stopped Rob on his way to DJ a club in Phoenix, Arizona to chat for a minute. After a recent escape to Port Antonio, Jamaica to record their 10th studio album, Thievery Corporation are still very much on top of their game, continuing to pack houses & make records, all while presenting new flare and showing us what makes them so special.

Spill Magazine: You’re on tour right now. How’s it going with 20 or so members? Are you one big happy family?

Rob Garza: Yes, definitely. Sometimes I think our presence on stage reflects the music. The music has so many dynamic environments and genres. On stage we have so many amazing and different people – different ages, ethnicities and backgrounds. That diversity on stage helps us bring the songs from the record to life on stage. It’s definitely a fun ensemble and there’s never a dull moment.

Spill: You and Eric started together in ’95. What has it been like to have a have a music career span over 22 years? How have you watched the music world change?

RG: When we started this, I don’t think Eric or I ever had the intention of becoming a band. We were just listening to a lot of music, spending a lot of time in clubs and trying to make our own records. We started putting out singes and we were very surprise when people started listening and engaging.

Spill: Do you try to adapt or just do your own thing?

RG: I remember on our first trip to the UK, somebody told us that this downtempo music is over and dead – “drum n’ bass is the new thing” he said. But here we are, 22 years later and we are still having packed shows and still making records. Still doing what we love!

To be able to this for 20 years, you really have to not be affected by the trends and fads in the music industry. You have to stick to how you feel, what you’re listening to and what’s inspiring you. Being from DC also made it interesting for us. There isn’t much of a music scene there; at least not like there is in New York or LA. I think that let us concentrate on what we were doing and helped us carve our own path.

Spill: You make music that’s great for dancing, reading and sleeping. Do you have a preference for the more upbeat stuff or for the downtempo vibes?

RG: That’s an interesting question. I’ve come to realize that a song doesn’t need to be one thing or another. Our songs are so multi-faceted. A song can be “downtempo” on the record but when we bring it to life on stage it can take on a totally different vibe. We normally just get into the studio and pick up instruments and start playing around. It starts to open up and unfold as we create it, and we let it do its thing. There’s usually not any, ‘we are going to make this type of song’ moment.

Eric and I come from very diverse musical backgrounds. For a long time, Eric was a DJ and I was making records. We both were listening to everything; jazz, bossa nova, lounge music, Bollywood soundtracks, you name it. So when we create, we never seem to feel limited.

Spill: The new stuff was recorded in Port Antonio, Jamaica. Can I assume there will be a heavy Jamaican influence? A reggae vibe?

RG: Yep! With this new one, we really went back and got reconnected with our reggae record collections. We were listening to a lot of dub and dancehall, so that was shaping our sound. We used that and brought in a Thievery flavor, we started mixing in 90s breakbeats and lots of other elements. The previous record Saudade (2014) was very jazzy and cinematic, bossa nova flavored. This is will be quiet different.

Spill: So how did you end up in Jamaica?

RG: Eric was on holiday in Port Antonio. Somehow he found out there was a recording studio down there called Geejam. He called me up and told me the place was magical. He said, “How do you feel about coming down and making a record here? We could bring the band and really get into the vibe.” I told him he already knew he wasn’t going to have to twist my arm. Not long after, we were down there with the rhythm section.

Spill: What is one of the most memorable moments you had during your time there (musical or not)?

RG: Just being there really was amazing; hanging out, relaxing a lot, eating, drinking Jamaican rum with the locals. For 10 days or so we would spend the mornings at the beach, swim in the ocean and then hole up in the studio for about 12 hours.

The whole thing was just very fitting – the way we ended up down there and how the record took shape. It was really the first record we made outside of DC and the first one that didn’t feel stuck between tour schedules and other craziness. It was refreshing to get outside of the common element.

Spill: You’ve always taken progressive political stances on various issues. How are you feeling and will the new album reflect on our current state of the world?

RG: We are definitely feeling a lot of things right now. But this record was recorded far before the election and before any of this started coming to a head. That being said, we are politically and socially conscious, but I think things that we talk about are affecting the whole world. There definitely won’t be any singing about Hilary or Trump but you might hear some things having to do with police violence, the media at large and propaganda that the world is experiencing.

Spill: I read a quote from you that said, “We don’t want to necessarily tell you what to think… we want to make you think.” I love this because, my college roommate would always wear a shirt that said, “Don’t learn what to think… learn how to think.” What will the new album make us think about?

RG: Our main intention is to expose people to different musical sounds and traditions. We hope to get away from the popular music trends. We just want to stay true to how we feel and what we believe in. We like to let our influences and experiences take over and express that through the music. I guess, most of all, we hope to open up ears and minds.

After majoring in business & entrepreneurship at UCSB and traveling the world, Andrew moved to Los Angeles to pursue music and not give up his love for surfing, hiking and yoga. He is also in a couple really cool, up and coming, indie-rock bands in LA - Mothlight & Lone Kodiak.
RELATED ARTICLES
eric hiltonfeaturesrob garza
6.0