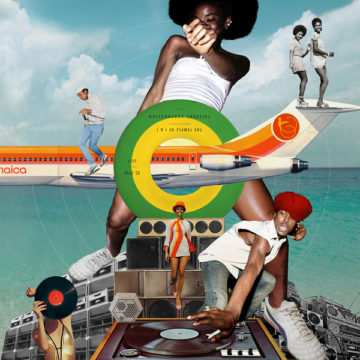 Thievery Corporation
Temple Of I & I
ESL Records

Rob Garza and Eric Hilton of Thievery Corporation have never been signed to a major label. They’ve never had a major radio hit or topped the charts, yet they’ve managed to make music for 20 years, sell out huge venues, headline many festivals and sell millions of records. Rob and Eric started this project as little more than a hobby and an outlet to describe their love for lounge and club music. In the process, they’ve founded and operated their own label (ESL) and maintained a loyal and significant fan base. With their latest release, Temple of I & I, Rob and Eric recorded down in Jamaica, giving this record a fun reggae and dub influence.

Since 1996, Garza and Hilton have released 8 studio LP’s, 2 remix collections, 2 DJ mix albums, and continuously toured and performed in 5 continents. In doing so, they have conceivably created a completely new sub-genre of electronic music. Thievery Corporation has always been eclectic, relaxing and powerful — and this record does not shy away from any of those. They have made a dub album just as great of many of their authentically Jamaican predecessors. However, rest assured they aren’t trying to copy what artists like Pete Tosh, Black Uhuru or Tosh do. This is supposed to be electronic and lounge-music; a touch of traditional Jamaica meets modernism and years of varying influences. The album still has its Thievery staples, an upbeat brass section providing groovy melodies, driving horn stabs, and thumping bass. With a repertoire of music like Rob and Eric have, it’s hard to pin a finger on genre — Middle Eastern, lo-fi, coffee-table, ambient, Jazz Bossa Nova, trip-hop?

The punchy drums and catchy melody of “Ghetto Matrix” shows the quintessential easy-listening Thievery vibe. The track features hip-hop artist Mr. Lif, who, as expected, touches on some socio-political issues. The melancholy title track “Temple of I & I” and the careful “Love Has No Heart” are hazy, spirited tunes with jazzy guitar and floating keyboard lines. Temple of I & I offers a renewed sense of love and appreciation for these two gentlemen. Much like the enchantment I felt when I first listened to 2002’s The Richest Man In Babylon and 2008’s Radio Retaliation. Long time fans of Thievery Corporation should be satisfied by their 8th studio album. An album, in essence, is simply a snippet of time showing where an artist is. Saudade was a modern classic of mainly Bossa Nova. Temple of I & I is a work of similar proportions with a new influence. It’s a way for Rob and Eric to continue to express themselves and their influences, a big reason their fans love what they do.

After majoring in business & entrepreneurship at UCSB and traveling the world, Andrew moved to Los Angeles to pursue music and not give up his love for surfing, hiking and yoga. He is also in a couple really cool, up and coming, indie-rock bands in LA - Mothlight & Lone Kodiak.
RELATED ARTICLES
album reviewseric hiltonesl records
7.0