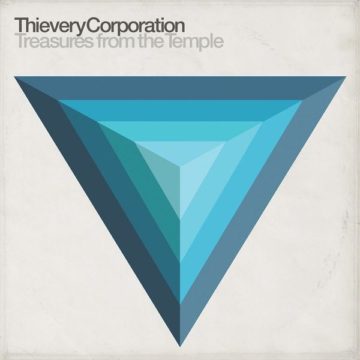 American duo Rob Garza and Eric Hilton have been making genre-defying music as Thievery Corporation since the mid 1990s and have been doing so in the spotlight since 2005’s The Cosmic Game. Endlessly restless, the duo have not gone more than three years between album releases and have worked with more names from more genres than would be believed. Little has changed on 2018’s Treasures From the Temple, which is an eclectic, mostly reggae and island-infused collection of tracks with guest vocalists from longtime collaborators Mr Lif, Natalia Clavier, and LouLou Ghelichkani as well as up-and-coming reggae sensation Racquel Jones.

Few bands have as many genre qualifiers attached to their name, such is the fluidity with which Thievery Corporation move between influences and sounds. At their essence, Garza and Hilton are electronic producers but their influences include reggae, bossa nova, jazz, dub, and down-tempo ambient music; the former two are the influences that are most prominently on show on Treasures From the Temple, with more than half of the album’s 12 tracks clearly built around island-inspired rhythms. The strongest is “Letter to the Editor” featuring vocals from Racquel Jones, who is clearly a force to be reckoned with. Blended amidst the Caribbean sounds and instrumentation are some real standout tracks and it is these, though they are the minority, that really define the album’s quality. “History” featuring Mr Lif is a profoundly powerful, partly autobiographical account of black America that features lyrics like “I can’t be black without historic systematic oppression, I can’t look at a cop without second-guessing” and references slavery and Nat Turner, as well as drawing parallels between slavery and present-day media. Equally impressive but in a different direction is the down-tempo, disco-sprinkled gem “Voyage Libre” featuring LouLou Ghelichkani.

Though lacking in some of the cohesion of past efforts, Treasures From the Temple is again a very solid effort from a very diversely talented duo. It is up against some already exceptional electronic albums released in 2018, but as always Thievery Corporation show that they are able to hold their own.

Br. lives in southern Ontario, grew up on The Beatles and The Journeymen, spent his adolescence immersed in grunge, and his adulthood in British alternative. His greatest joy is seeing his son dance and grow into his own appreciation of the indescribable joy of music...
RELATED ARTICLES
album reviewseric hiltonesl records
8.0