Features
294
previous article
SPILL FEATURE: THE FUN OF GOING TO A RECORD STORE IS THE TREASURE HUNT - A DISCUSSION WITH SUNRISE RECORDS’ DOUG PUTMAN
next article
SPILL TRACK OF THE DAY: DIRTY REVIVAL - "SO COLD” 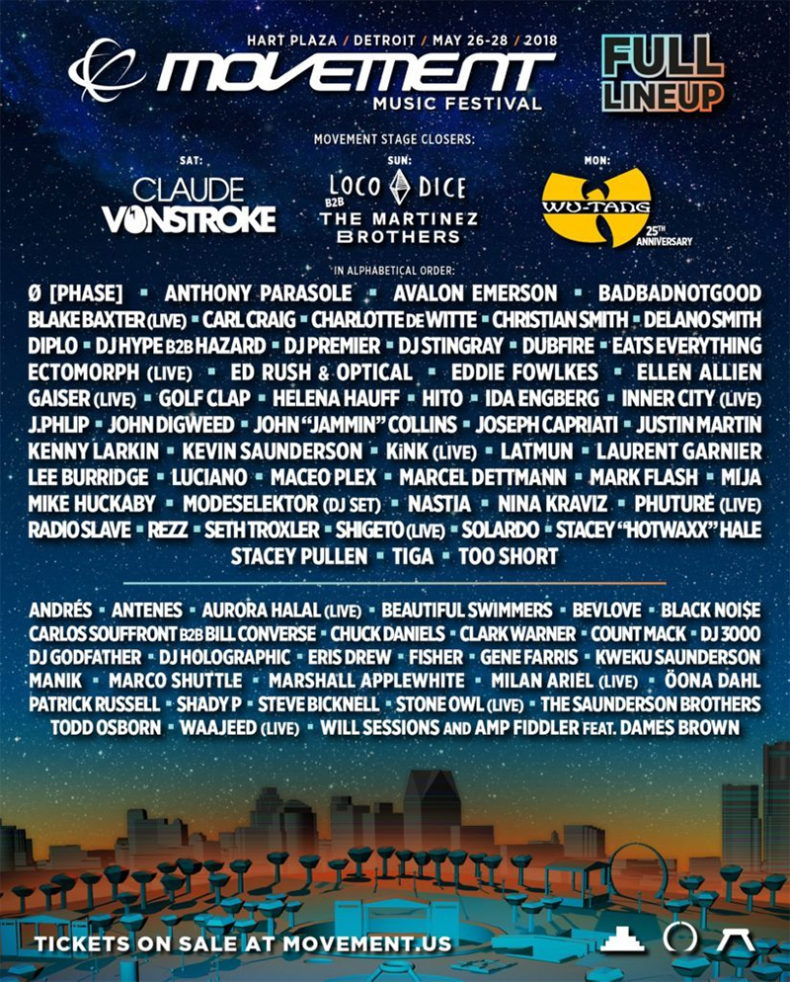 And that’s just the main festival. Starting this month, pre-parties are playing every weekend in Motor City. During Movement, TV Lounge will be hosting its usual great after-parties, along with Justin Martin’s Dirtybird party on Saturday night. Don’t forget Troxler’s Old Miami party – although word has spread and it’s busier than ever.

Movement’s honest roots, steeped in Detroit techno, have made Motor City’s Hart Plaza a mecca for techno fans since taking over from DEMF (Detroit Electronic Music Festival) in 2003. Save a few name changes and organizers over the years, along with a national ad campaign for television featuring Juan Atkins’ music in 2003, Movement was helmed by Detroit Techno legends Kevin Saunderson the year before, and Derrick May took over to 2006. Despite budgetary cuts and name changes, Movement has continued to deliver one of the most solid techno festivals worldwide.

I’m curious to hear Wu-Tang Clan’s 25th anniversary as well as the Godfather of French Techno, Laurent Garnier’s set – will Garnier drop his 1997 bomb, “Crispy Bacon,” just past its 20th anniversary? It’s also nice to see J.Phlip on the festival stage after she dropped a killer set in the VIP Lounge last year. Plus the lengthy list of solid DJs and booked talent. Another phenomenal line up again.

While Movement is a little quieter on Detroit talent at the festival for 2018, the after parties are definitely making up for it.  There’s no denying that Detroit hustles harder.

Festival Tip: Book your accommodations NOW. If you’re strapped for cash, fear not. The festival has rolled out a payment plan so you can avoid the nasty sting of the American dollar.

Talia Wooldridge is an avid music lover, composer and ethnomusicologist who contributes artist interviews, live concerts, festivals and album reviews for Spill Magazine. She has written extensively on the intersection of music, personal identity and cultural symbolism with an early focus on Latin American Hip Hop and female Cuban rappers. In her spare time, Talia writes, composes music and manages Music Can Heal, a non-profit that brings live, award-winning musicians to inspire healing in hospitals, hospices and communities in need. Her next project is an interactive music-travelogue exploring music cultures and music travel around the globe. Follow her here: www.taliawooldridge.com + www.movetoyourownbeat.com.
RELATED ARTICLES
claude vonstrokedetroitfeatures