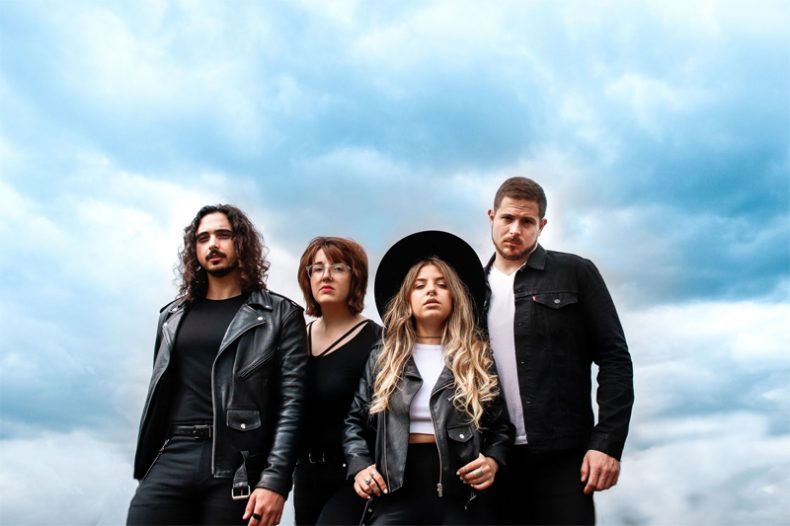 A SIT-DOWN WITH TORONTO’S MONOWHALES

MONOWHALES is a name that has definitely left a colourful, upbeat, and fun imprint on the Toronto music scene. The powerful group of four are coming around full swing while gracing Canadian venues, coming to a halt in Ottawa early December.

Most would have caught MONOWHALES while they were supporting various Canadian top-charting bands such as Sloan, Coleman Hell, Matt and Kim, K. Flay, and Dear Rouge. Alternatively, news of MONOWHALES selling out 2019’s Canadian Music Week Horseshoe Tavern show spread like wildfire. They have picked up a few awards along the way, including the Jim Beam INDIES Award for Alternative Artist/Group of the Year, and the Forest City London Music Award for Ontario Independent Recording Artist.

While prepping for MONOWHALES’ tour, lead vocalist Sally Shaar, took time out to attend Brittpaperscissors’ BPS Studio Launch Party this past September 28. The night included performances from local band Fade Awaays and Deanna Petcoff. Aside from performances, Mortal Kombat,and Smash Bros. were also included, while the crowd was immersed into what the supportive Toronto music scene is comprised of. Shaar explains, “I loved what she [Brittpaperscissors] was doing and her DIY spirit is something that I can really connect with. Personally, I feel lucky to be surrounded by incredible people in a very supportive scene here in Toronto. I hope this love only continues to grow as we help each other.” The support was not just observable by the number of individuals that appeared that night, but it was also ever-present in the air.

MONOWHALES did not make an appearance on the stage that BPS Studio Launch night. “We are currently focusing on getting the songs ready to record and we had an upcoming tour, so the timing wasn’t right. I was honoured to have been Britt’s co-host in the Band T-shirt Fashion Show for the night though. We had so much fun planning and making the promo for it. I got to hang out with Britt a lot and get to know her more, and I expect we will be doing some cool shit together in the future”. The band truly continues to exemplify a great example of what it means to become fully immersed into Toronto’s entertainment and music ecosystem. 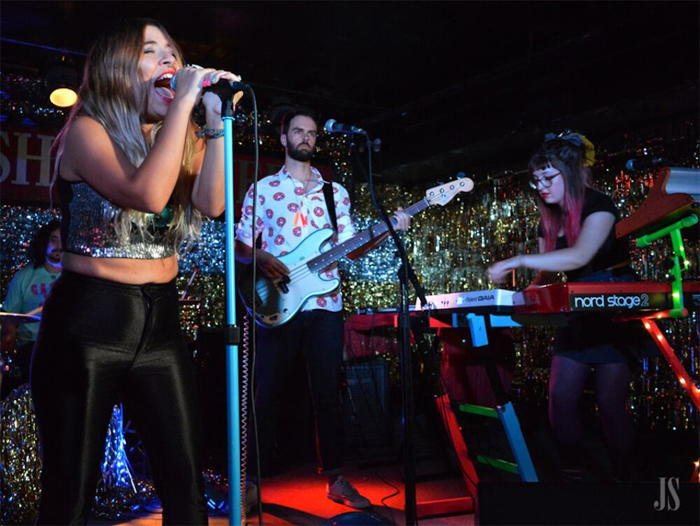 Outside of the studio launch, MONOWHALES’ single “RWLYD (Really Wanna Let You Down)” is doing exceptionally well and debuted at #38 on the BDS Canada Modern Rock Chart.It is receiving tons of support from Indie88 Toronto, SiriusXM’s The Verge, and countless other stations.  “Jordan and Zach brought the song into rehearsal one day and Holly and I instantly dug it. We all started working on it and felt a deep connection to the music and the meaning of the song. We were all going through a heavy time in our personal lives and RWLYD helped heal us in a way. Seeing it do well means so much because it hits so close to home.”

At first glance, the video for “RWLYD” has similar themes and styles as St. Vincent’s “Digital Witness”, specifically the introduction with the classroom desks and the grey pop up backdrop. While greatly appreciating the comparison, Schaar goes on to explain that the video’s theme is more specifically,“uncomfortable and awkward looking situations to show the internal struggle of what it means to be complacent and the journey to being able to break free.”

While MONOWHALES stir up new tracks, tour dates, and collaborations with other local artists, Holly Jamieson, MONOWHALES’ keyboard player also spends her time creating wicked customizable synth cases. Her deep love for synthesizers began when a “really awesome painted MIDI controller that Coldplay was using for their live sets” caught her eye. “They had deconstructed a MIDI keyboard and had an artist paint an elaborate impressionist painting on the body of the instrument.” . “I found that super-inspiring, and after some extensive googling I didn’t find that many examples of people designing or customizing their synths, so I thought up a way to create an external case that would fit on the body of the synth, similar to the way a phone case fits on your phone.” She then set herself on the journey to learning 3D printing with objects and shapes, which would then lead to endless possibilities for stage design, artist branding and customization.

The image and energy that MONOWHALES brings to the city and their shows is evident in their 2016 music video for “Home”. With Shaar popping into Toronto’s infamous Sonic Boom record store,  to longboarding around the city’s congested streets, and jamming with Union station’s street performers, it ties together the where, who, and what to expect from the band. Shaar explains that, “to this day I would say that filming that video was one of the best days of my life.” Modestly Shaar adds, “Everything that followed it including its viral success was an added bonus!”

Shaar excitedly shares her top longboarding locations in Toronto, which include High Park and Palmerston Boulevard towards College Street. “The trees are such a gorgeous sight. Seeing the seasons change as time goes by on that street is a gem in my opinion.”

Freda Looker has been a music enthusiast since her mother first got her dabbing at a young age to Engelbert Humperdinck, The Beatles, and ABBA. Her passion still lives on today, avidly attending music festivals, blogging, and studying Music Business. She hopes to continue writing and engaging with like-minded music enthusiasts wherever the rhythms and beats lead her.
RELATED ARTICLES
featuresmonowhales

by Stephen Lussier on March 28, 2021
SEASONS CHANGE AND REARRANGE A CONVERSATION WITH MARTY WILLSON-PIPER OF MOAT Marty Willson-Piper loves music, plain and simple. One can see [...]