IT MAKES FOR GOOD MUSIC: A CONVERSATION WITH FAT MIKE OF NOFX

A CONVERSATION WITH FAT MIKE OF NOFX

To any punk for the last four decades, NOFX’s Fat Mike probably needs no introduction. Fronting NOFX since ’83 has been no easy ride – 38 years of punk rock debauchery have gained him and the band notoriety, not only for their music but for their attitude. With their upcoming 14th record, Single Album, the band offers something darker, and a lot more personal than the usual fare of partying, politics, and entertaining anecdotes.

‘All the dark material was there without COVID,’ Burkett explains, as the album was written and recorded a year ago. “I had my first bout with depression in my whole life. It wasn’t crippling, it just made me do a lot of drugs and drink a lot. ‘Cause I recently got divorced, and I was lonely… but it makes for good music I believe.’

He continues, ‘This was the first album that I wrote [and recorded] while using drugs and booze… like every day in the studio I was pretty wasted. I was drinking vodka, every day at noon, and y’know doing blow. Bill Stevenson wasn’t too happy about it.’

‘Since I was depressed, I wrote darker songs,’ he explains. “But also, when you’re writing 300 songs – that’s how many songs I’ve written – you have to come up with new ideas to sing about. And different perspective… I never really sang about heartbreak before.’

“It was supposed to be a double album, there were 23 songs on it,” he explains. “My goal was to make a really great double album, ‘cause I don’t think anybody has before except for Pink Floyd with The Wall. So, when you’re writing a double album, and recording it, you kind of think about it differently – you’re really trying to make it interesting for four sides of an album. And it was interesting, but I realized it would be a better single album. The other songs, they’ll come out here or there… but I did not accomplish what I set out to do.” 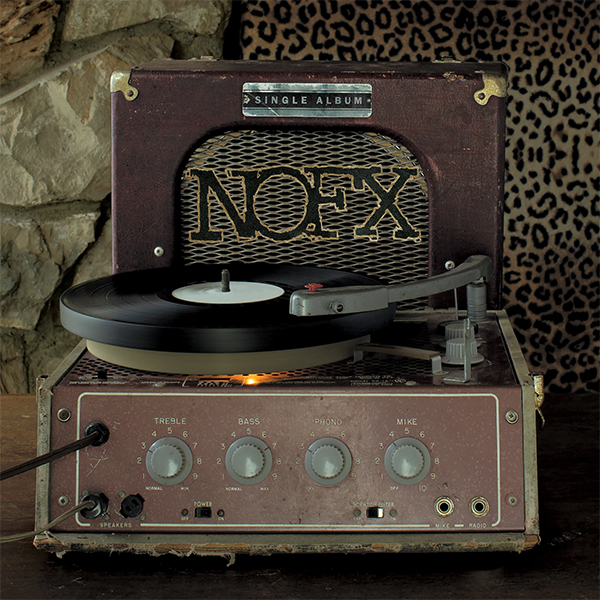 ‘The big trick, after so many years,’ he continues, ‘is making a record that doesn’t sound like your other records… but still is liked by your fans. The Ramones – no one really cared about their last records, ‘cause you know exactly what you’re getting. It makes me so happy, after, y’know, our 14th album, people still like our new music. ‘Cause it’s hard – it’s hard to stay relevant.”

One of the tracks, “Linewleum”, was originally supposed to be on disc two but made the final cut on Single Album. “There was a different song,” explains Burkett, “but I decided to switch them out ‘cause we needed some fun songs.” “Linewleum” is a witty reimagining of the band’s most popular track, 1994’s “Linoleum”. Fat Wreck has released two videos to accompany the track, featuring shots of bands covering the original track.

‘The video accomplishes putting all these fucking bands from all over the world in it, and they’re stoked,’ Burkett explains. ‘It was just really fun to stoke out all those people.’ A second video was released a few days later: ‘I got such a thrill from seeing how many bands were just stoked. So I said, ‘Shit, I wanna stoke out 85 more bands.’’

Burkett has been sober for a few months now, and has written a remarkable 38 songs in his downtime. Commenting on his sobriety, he reveals, ‘Everyone keeps saying congratulations… that’s cool I guess. I like being sober, and y’know I’m not gonna be sober forever, but it sure is nice to be sober… the days are a lot longer right?’ With that many new NOFX songs up his sleeve, he confides, ‘We’ve actually already started recording, so we’re gonna have another record out this year.’

In addition to a new record, Burkett muses on his plans for the future. In recent years he’s opened up about his love for BDSM and crossdressing. ‘The more I bring out in my songs, and in my life… I think it really helps people feel more confident about doing weird stuff,” he says. “Like this is how the world should be. It could be what I do in the future a little more, is publicly speaking about how to find happiness. ‘Cause all around you, people decide not to be happy, by doing stuff like buying houses, and getting mortgages, and having kids…. And kinky sex makes everyone happy.”

Another exciting point on the horizon for Burkett is his involvement in the opening of a punk rock museum in Vegas. “It’s not like the Rock & Roll Hall of Fame,” he says. ‘It’s gonna have everybody in it. You don’t have to be good or popular, you just have to be a punk band and you’re in.” The museum is set to open in the fall of 2021 and will feature artifacts from 1974 until now. ‘Every punk rocker in the world is gonna want to go.’