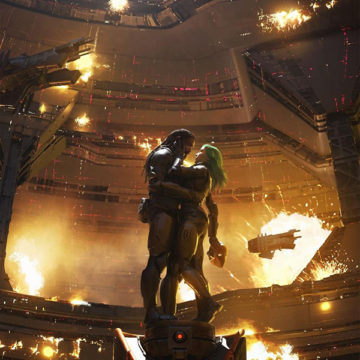 With their ninth studio album, Coheed and Cambria has succeeded in taking quintessential progressive rock, sticking it in a blender and creating something heavy, complicated and even a little breathtaking.  Vaxis – Act I: The Unheavenly Creatures serves as a stern reminder that Coheed and Cambria isn’t going anywhere anytime soon.  This album has a healthy dose of the band’s classic sounds complete with intricate licks and lead singer Claudio Sanchez’s undeniable chops mixed with gritty and emotional new tones.

Opening the album with a soft prologue of piano fading into an eery whisper of what could only be described as a big, beastly sounding man, the story of two unheavenly creatures is set up.

From here, classic Coheed and Cambria is introduced with “The Dark Sentencer” which combines Claudio’s vocals with a woman’s haunting ones and chants of “hey” overtop of heavy guitar. Lyrics not to be forgotten, clever and desperate verses like “It’s been my pleasure to serve your disease” are sparked throughout.

The title track “Unheavenly Creatures” sounds like a Stranger Things soundtrack all the while telling the story of an eery escape and run away as Claudio shouts “Run! Run! Run! Run! Run like a son of a gun!”  Easily going into a song that makes one think of waking up after something horrific, relaxed vocals are interrupted by heavy guitar chords, slowly ringing out over the voice.

On and on the epic tale of these two creatures is told throughout the album, woven through thunderous drums, a varied and impressive vocal range, soft keyboards and contrasting guitar.  The growth in the band can be heard no better than on the track “The Gutter” which sees Coheed and Cambria’s classic sound on a collision course with Billy Talent-like screams and softer breakdowns. A must-hear track, it shows much promise to come in a band that has already accomplished so much.

While each track on this album could be described in a completely different way for its ability to continue the tapestry of the story being told, it’s definitely best to grab the album for yourself and let that sweet, sweet air candy ring through your headphones.

Gabrielle Mueller is a lover of all things music, writing and charcuterie boards. Gabrielle has a particular passion for music of the 1960s and the hippie movement in Toronto’s Yorkville district. Gabrielle runs her own music website, The Hippie Historian, where she reviews concerts, interviews musicians and writes about music history that spans the ages.
RELATED ARTICLES
album reviewalbum reviewscoheed And cambria
9.0