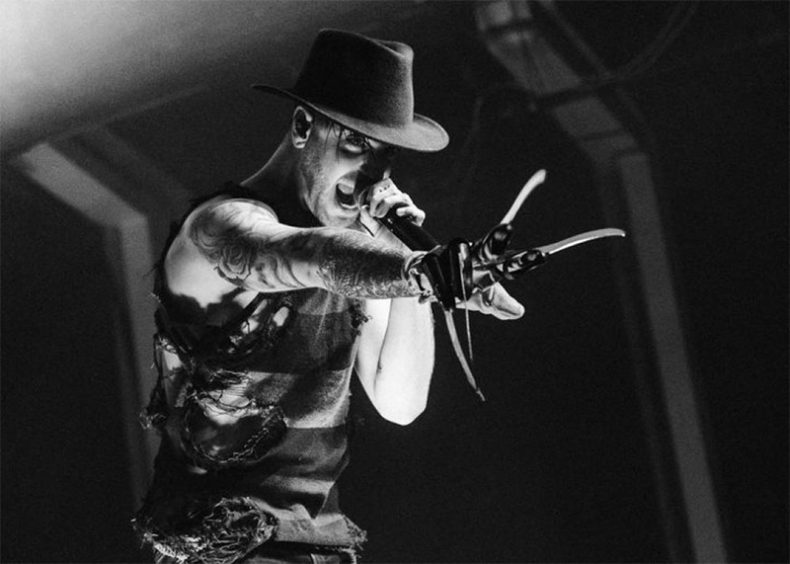 Either you really love horror movies, or you don’t. The same goes for metal music. Ice Nine Kills has done a killer job bringing the two together, something not every band can pull off.

Spencer Charnas, creator of, and frontman for the band has a massive love for horror films. “You want to do something with your life that you have so much fun with, and horror movies have always been that for me so it was a natural kind of yearning to do something that I love and incorporate in my daily life.”

Their performances showcase a horror theme, with signature props from the horror films that inspired the songs such as a red balloon, a chainsaw, Freddy’s claw and black roses, with costumes and costume changes, and a little bit of acting that makes it an unforgettable theatrical event. This is why Ice Nine has the best fan base. INK fans are so great, and so die-hard and dedicated, that on Record Day the band made number 19 on the list. To give some perspective, The Rolling Stones were number 5. “So to see the horror-metal INK fans come out and support us like that is absolutely crazy.”

Spencer Charnas has come a long ways since the band’s first album, Last Chance to Make Amends in 2006. They have completely changed from the punk style of that album to the metal core on later albums. Charnas, the only remaining original member from that era, says that there was never really a conscious decision as to what style the band have. He wrote the album when he was a senior in high school and now, in his mid-30’s, he says “your tastes just naturally expand”. He still very much loves that style of music and it’s still incorporated in what they do melodically. It was a natural progression and he says he’s proud that they still have their punk roots and influences today.  If he had to pick one song that is his favorite, that turned out the best lyrically and musically, he would choose “Your Number’s Up”, a song written about the popular horror film Scream, which happens to be one of his favorites. “I think we really nailed the tone of the film in that one.” 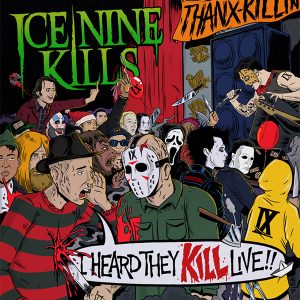 I Heard They Kill LIVE!! was recorded in its entirety at the Worcester Palladium in Massachusetts. The Silver Stream, hosted by horror icon Bill Moseley, AKA Chop Top in the Texas Chainsaw Massacre franchise featured that footage with Bill and the band members finding themselves in a gruesome horror film of their own. Charnas wasn’t sure if the livestream would be available “on demand”, and they wanted to see the fans’ reaction to it first. He jokes, “but you never know, someone might die during the making and then we won’t be able to stream it for legal reasons”. There’s a good chance that the feature will make it to DVD and/or Blu-Ray, but he doesn’t want to speak too soon. Satellite radio’s Sirius XM’s channel Octane broadcasted the World Premiere of the audio portion of I Heard They Kill LIVE!!, ahead of the live stream event. Octane have been early supporters of Ice Nine Kills and played their music before any other stations would. They remind Charnas of “the glory days of rock radio when I was a kid growing up in Boston, listening to WAAF and WBCN and WFNX.”

The Silver Scream is now 2 years old. Spencer says “We have been busy at work writing a new album that we hope to have out sometime next year, and yeah, it’s been great”. When asked if they will continue with this trend of horror movie inspired music, Spencer says “in true horror fashion, I want to keep the mystique up.” He doesn’t want to give anything away, but “there’s always a sequel”. He absolutely would like to do a horror film of his own one day, actually, they were working on the live stream event, teasing “It may or may not have a little horror movie of its own, you’ll have to tune in to find out”. Over 2.7 thousand INK fans and Elite Psychos tuned in.

They started a tour with headliners Five Finger Death Punch in 2020, with Papa Roach and I Prevail, that unfortunately got cut short due to lockdowns across the country. He hopes that they can finish it out, but of course that is up to Five Finger Death Punch’s management. They were very much looking forward to the tour, “it’s the biggest tour we’ve ever done.” Playing in arenas would be an exciting first for them. “Hopefully when the world resumes, so will that tour”.

Melinda is a music enthusiast from the US who grew up on vinyl in the 70s and 80s. She's a lover of all genres, but rock/metal runs through her veins. Music is always in the background and in her head. Unfortunately, she has to have a "regular 8-5" job since "Professional Concert Go-er" doesn't pay the bills. Her bliss would be to follow more musicians and bands than "People she may know" on social media. Her ultimate long term goal is to be the old lady just enjoying the show down in front at the barricades at live shows. Her favorite quote is "Where words fail, music speaks".
RELATED ARTICLES
fearless recordsfeaturesi heard they kill live!!

by Melinda Welsh on September 1, 2022
I’M IN LOVE WITH BAD THINGS A CONVERSATION WITH I PREVAIL VOCALIST ERIC VANLERBERGHE Not only has I Prevail just released a new [...]
8.0

by Melinda Welsh on August 19, 2022
I Prevail True Power Fearless Records Michigan’s I Prevail have emerged from a nearly two year break to deliver their third album, the highly anticipated follow up to 2019’s Trauma. True [...]
9.0