SPILL FEATURE: THE ART OF EVERCLEAR – A CONVERSATION WITH ART ALEXAKIS

THE ART OF EVERCLEAR

A CONVERSATION WITH ART ALEXAKIS

On the current Everclear tour, lead singer Art Alexakis had this to say: “It’s hard to believe we made this record 20 years ago. Even though I’m in a different place now than the guy who first wrote and sang these songs, and even though faces, voices, and relationships change, the songs still feel relevant and vital every time we play them live. I can’t wait to play the whole record for the first time with the guys in Everclear now. It’s going to be awesome!”

For over two decades, Everclear’s sound has reflected the rock, post-punk, and singer/songwriter influences of Art Alexakis, including acts like X, the Replacements, the Pixies, Bruce Springsteen, Tom Petty, and Elvis Costello. The band found success with their first three albums on Capitol Records, Sparkle and Fade, So Much for the Afterglow, and Songs from an American Movie Vol. One: Learning How to Smile, which were all certified platinum. In 2015 the band released their ninth studio album titled Black Is The New Black via The End Records/ADA. Everclear is comprised of Art Alexakis (Vocals/Guitar), Freddy Herrera(Bass/Background Vocals), Davey French (Guitar/Background Vocals), and Jake Margolis (Drums).

In an effort to address a critical charitable need, Everclear will be donating $1 per ticket sold at each show to Sweet Relief Musicians Fund, an organization that provides financial assistance to career musicians, venue workers, production staff, crew members, and their families suffering from injury, illness or disability.  Funds raised from the tour will pay for medical procedures, doctor visits, prescriptions, and vital living expenses.

“Sweet Relief is enormously grateful to Everclear and everyone connected to the So Much For The Afterglow 20th Anniversary Tour for this incredibly generous donation, and the funds raised will help hundreds of desperate musicians and music industry workers in critical need,” said Bill Bennett, President of Sweet Relief Musicians Fund.

I had the opportunity, before the band embarked on tour, to chat and review the musical legacy of Everclear with Art Alexakis. He opened with the news that the decision to mark the anniversary of So Much for the Afterglow was fan directed, as “we’re not really friends with the label any more.” The band had previously played several similar themed tours for the Sparkle and Fade and Santa Monica album anniversaries. These had been very successful. Alexakis stated that one of the main things was that a lot of people had asked Alexakis himself for those tours, and a lot of people had attended those shows. The ticket sales for the new Afterglow dates, with the various VIP packages, have been doing well sales wise, which is always a good indicator that people are excited about it. Alexakis added that “It went through the roof, so I figured it was the right call”.

I’ve been curious all these years, and wondered if Alexakis could share his thoughts on a couple of the album tracks. Given that the album had been created at a difficult personal time, I was curious if time and age had also changed his perspective on that album, both collectively and on the songs themselves individually. Alexakis replied with this quite surprising quote: “The album was going to be called Pure White Evil”. The initial intention was “really heavy art”. Alexakis had wanted a contrast between hard and soft, dark and light. The band took the record to New York to mix, but he was dissatisfied with how it sounded. Alexakis had shared it with family and close friends, but they agreed that the general consensus was less than satisfactory. Alexakis had also shared the album with his A+R guy, who deemed it satisfactory but that he knew that he knew that Alexakis was capable of so much better. He encouraged Alexakis by saying: “You have creative control. We’ll put it out if you want”. Alexakis decided to take two weeks off, however the potential of failure lay heavy on his shoulders. “It kind of crushed me, because I grew up a failure. You know, trying to climb over the bridge. I grew up poor and had to struggle my whole life, but after the success of Sparkle and Fade, I think myself was entitled. I just wouldn’t have admitted it at the time. It just wasn’t done back then.” Alexakis then went to New York on what became a journey of self discovery. He checked in to a hotel, and just generally walked around the city alone. He did a lot of soul searching and he wrote a couple of songs. One of those was the title track of the So Much For The Afterglow album. It summed up his feelings that he was experiencing at that particular time in his life. Alexakis viewed that time as one that caused him to push himself personally, creatively, and physically. 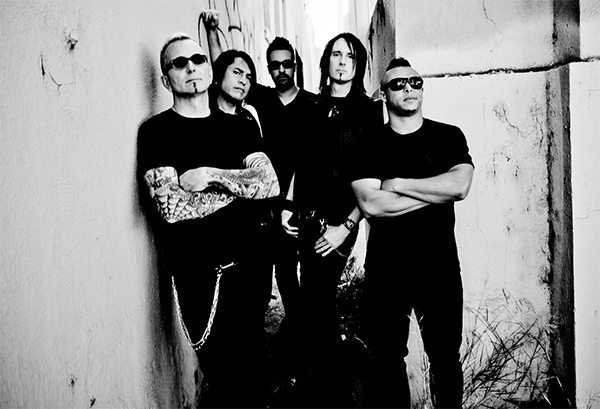 He  had found that he had to keep pushing the envelope, making copious notes in notebooks. He changed notes of songs, wrote new songs, and also decided which songs to cut from the album. After three weeks, he called the band, his management, and his A+R guy. He had decided to book some studio time in order to record the new songs. Also, the intention was to rerecord some stuff and add some parts. They then finished the record in June, mixed it with Andy Wallace, and released it in October. He now views the release favourably and states “I wouldn’t change anything about it”. Alexakis also highlights “Father of Mine” as a particular personal favourite. “It was a song I had written and I knew it was very intense. When I played it for my wife, and she was like, “Man I don’t know. It’s so intense. Are you going to put that on the record?” I go “yeah”. Then I played it. When I was in LA, I played it acoustic for my A+R guy in his office. The door was open and at the end of the song he was also quite emotional. He doesn’t show a lot of emotion and I walk outside — both him and his assistant are bawling”. Thus he had to include it on the album. There was also a debate with regard to releasing it as a single, but history has subsequently proved that it has become one of the band’s most popular songs. I had felt personally that the album had moved a significant departure in sound and style for Everclear. Alexakis however disagreed, preferring to regard the release as more of an evolution of the band, like something the Beatles and Rolling Stones had done. He elaborated that he also felt that the band had also continued to evolve after subsequent releases. “I mean everything on this record, even if you looked to go up to the next record after Afterglow, there’s some super poppy stuff on that and a very R+B influence”.  Alexakis added that viewing his catalogue, there was one common thread in that he had always done just what he had wanted to. Everything was his own personal vision.

He didn’t see himself selling out as being defined by pop music, but rather that in his own definition, it was him doing something that he himself actually did not wish to do. It was important to retain artistic control. Record labels he had found in the past had tried to impose demands on bands which stunted their individual creativity. Prior to signing a record deal, the band had been approached by over 20 major labels. Alexakis had defined ideas on a set amount of money in advance, record support, and tour support. Some were impressed by his level of business acumen, and others were confused by it. Finally, Alexakis had told the labels that he wanted “total creative” control on everything. That further put off some, and then left him with six out of seven. He explained to me that he will always be fully aware of what he wants to do creatively, and will not be governed or dictated to by others, where his own personal  “Art” is concerned. He also felt that in today’s music industry, that was an ethos that others should strictly adhere to. Currently Alexakis is with a label, but they do still give him that artistic freedom that he holds so dear. “At this point I’m going to make music that feeds the soul, and I think is going to connect with our fans. Other than that, you know we’re pretty much a heritage band at this point”.

I asked Alexakis how he had felt in the pre-tour rehearsals to revisit some of the songs that represented a troubling time in his life. He would also be facing the prospect of playing some of those songs for the first time ever in a live setting. Alexakis felt that it represented a challenge to the band itself during rehearsals. He stated that they had received a hugely positive response from the few shows that the band had played up to that point. He felt also that it was a challenge to make them better every time that they were played, and that one show is “worth ten rehearsals”. He surprised me, stating that he didn’t actually find revisiting the tracks of that period difficult. “It’s always good to know where you come from, but know where you are going”. He can still celebrate the songs every day for what they are and represent, as their meanings have evolved with him. He summed up by saying that this record’s very important to a lot of people. After each show, he feels blessed when fans share their personal stories and experiences of the album. Those things make it more important than just being music. With dates already published for the States, I wondered if Alexakis had plans to bring the band to the UK and Europe. Unfortunately, due to increasing financial costs for touring, this didn’t seem to be very likely. Alexakis did however warm to my suggestion that he could perhaps play some solo dates in that market if promoters were interested, and also stated “I would love to go to both Belfast and to Dublin”. If that idea takes off then I am definitely claiming full credit.