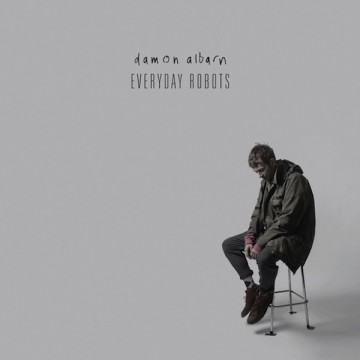 Damon Albarn has had a conflicted relationship with modern life for decades. As frontman for Britpop band Blur in the ‘90s, Albarn sang about the cultural homogenization that would inevitably ruin landscapes beyond America’s shores. Yet, he is also one of the masterminds behind virtual group Gorillaz in the early 2000’s, recording one of their albums entirely on his iPad.

Fast forward to today and Albarn continues to struggle with this contradiction on his latest work, Everyday Robots, an autobiographical album that is built with both electronic and organic soundscapes. His lyrics simultaneously look at how real moments make a life and how devices take the life out of the moment.

When conceiving the album, Albarn says he and his co-producer, funk legend Bobby Womack, considered forming another pop band like Gorillaz, but ultimately decided that at 46-years-old it was more apropos for Albarn to tell his own story.

Indeed, Albarn’s story is one worth telling. From confessions about his heroin use on “You & Me” to his coming of age in Leytonstone, England on “Hollow Ponds”, as well as his experience meeting a baby elephant in Tanzania on “Mr. Tembo”, Albarn’s life and perspective are intriguing.

Equally intriguing is his relationship to technology. The title track “Everyday Robots” looks at the void we attempt to fill with gadgets, which Albarn says was inspired by his experience amidst a mass of people staring at their phones in an LA traffic jam. He continues this train of thought on the atmospheric “Lonely Press Play”, where he croons about escaping via distraction and then on “The Selfish Giant” where he sings, “It’s hard to be a lover when the TV’s on”, revealing the impotence that comes as a result of this distraction.

Due to the heavy subject matter — and perhaps Albarn’s own reflective nature — most of the songs have a melancholic tinge to it, with the exceptions of the upbeat “Mr. Tembo” and “Parakeet”, a short piece that contains a lot of electronic chirping but no lyrics.

As an entity, the album begs the listener to stay with it and re-listen, which may be its final irony. However, if you are willing to wade through the depths alongside Albarn, you will be rewarded with songs that take root and make you feel (almost) human.

Native Quebecer and freelance writer Andrea Paré first began using music as a drug in her teen years to escape the drab experience of growing up in the suburbs. Now as a full grown adult and living in Toronto, she has a healthier addiction to discovering new musical artists and watching as much live and local music in her adopted city as she can.
RELATED ARTICLES
album reviewsdamon albarn
8.0