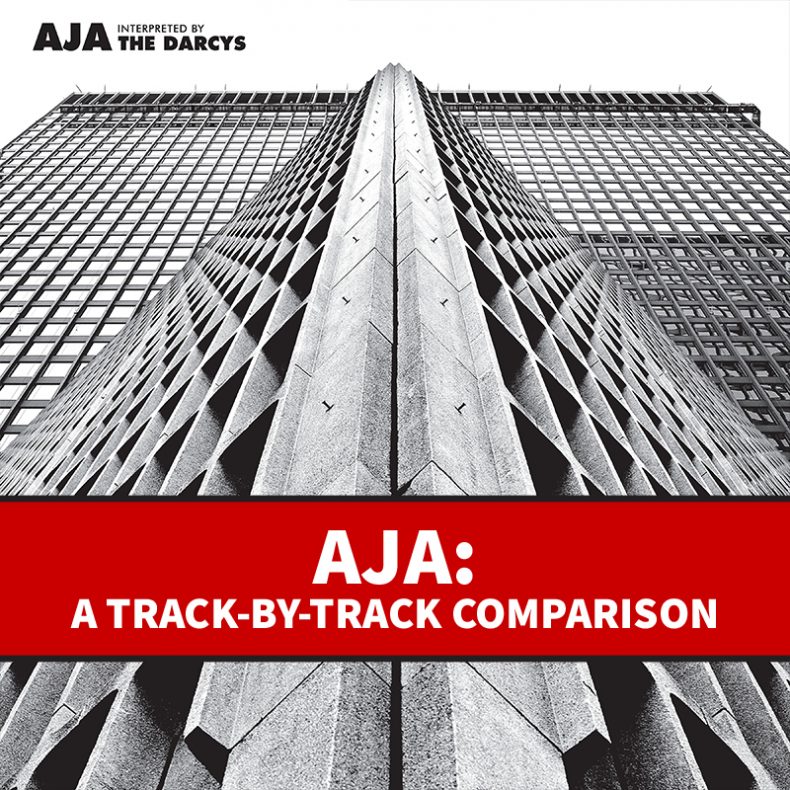 It is a bold statement to attempt to remake decade defining albums.

While they are generally no match for their predecessor, artists like Camper Van Beethoven can claim moderate success with their interpretation of Fleetwood Mac’s legendary Tusk. The trick that many artists may forget is to make the songs their own and find new arrangements.

In 2012, Canadian band The Darcys released a song-for-song remake of Steely Dan’s 1977 masterpiece Aja. With only one album behind them, it was an interesting move career wise, but certainly a memorable one. With their lush, dreamy arrangements, they stayed true to themselves are really made the songs of Walter Becker and Donald Fagan their own.

While The Darcys received criticism for their dark takes on the jazz-rock classics, people often forget that there is a dark element behind the Becker and Fagen story. Don’t forget that the name Steely Dan comes from the pages of William S. Burroughs’ gritty classic, Naked Lunch.

Below, the songs from both the 1977 release and its 2012 counterpart are compared.

Steely Dan: While not the first song on the original record, the title-track is certainly one of the standout tracks on this late ‘70s gem. The instrumentation between vocals is purely astounding, combing fusion, R&B & disco.

Steely Dan spent the remainder of the decade diving down a jazzy rabbit hole, progressively getting more experimental, but it is here that they are at their musical peak.

The Darcys: Longest running track on the Darcys album, clocking in at just over nine minutes this dreamy, indie rock waltz couldn’t be further from the original. Liquid guitar jangles, lush vocal harmonies drenched in reverb, and screeching fuzz guitar lines, so that Easy Listening can punk it up if it wants to. The bridge, which features a coach electric piano solo, has echoes of The Doors’ Ray Manzarek while the distorted guitar could have been sampled from Kevin Shields of My Bloody Valentine.

Steely Dan: The opening track on the original Aja, the song is pure ‘70s. The elements of jazz fusion are undeniable and is certainly helping to push the then new wave of soft-jazz. Becker and Fagan set the scene here for what is to be.

The Darcys: Jason Couse’s vocals here are superb and soulful, over the wall-of-sound feedback and background harmonies. The Phil Spector-like production adds a mystical element to their indie interpretation of this track. While they certainly come short of a few songs here, it is clear that The Darcys pulled this one off.

Steely Dan: One of the singles to fall of Aja, “Deacon Blues”, peaked at #19 on the Billboard charts. Perhaps not as well known as “Peg” or even “Josie”, this is still a banger. Certainly one of the darker songs on the LP, written about darks side of fame and “mythic loserdom”, Becker would say when reflecting on the track. Musically it is dominated by a heavy R&B feel featuring lush guitar riffs reminiscent of mid-60’s Motown, courtesy of Lee Ritenour and virtuoso Larry Carlton.

The Darcys: Here it begins with hauntingly faint piano lines over a wall of looped feedback. After a minute of this musical droning, it quickly takes another course to a killer breakbeat drum riff, giving it an almost acid house vibe while the simple guitar riffs overtop reek of Bernard Sumner’s Joy Division/New order sound. The vocals are superb and really set this one apart from its mothership. With lines like “drink scotch whiskey all night long and die behind the wheel”, The Darcys dark interpretation is certainly apt here.

Steely Dan: Probably the most well-known song from the original release, “Peg” was a smash hit for Steely Dan and is quintessential to the soft-rock genre. Reeking of disco, “Peg” acts as an artifact of the late ‘70s. Peaking at #11 on the Billboard Hot 100, this song was a radio staple is still frequently gracing any classic rock/pop radio stations today. While certainly the most radio-friendly track from Aja, the musicianship is still strong. Larry Carlton’s blistering fusion solo is certainly proof of that.

The Darcys: Here The Darcys kick it up a notch and provide a more cheerful arrangement. Abandoning the dreamy lushness that graces the rest of the tracks, here they provide more of a hard, alternative rock arrangement. While they do throw in some Beach Boys-like harmonies, this take is certainly the most ‘90s sounding on the record. The arrangement certainly couldn’t be more removed from the original but even though the song is true to The Darcy’s as artists, it somehow falls short on the album.

Steely Dan: Another one drenched in classic R&B, “Home at Last” serves up a bluesy feel and sets itself apart from the overall disco jazz combo that graces the rest of the LP.

The Darcys: Opening with an isolated Velvet Underground-like guitar part and reverb drenched vocals, “Home at Last” keeps the pace of the first three songs after the upbeat “Peg”. While the arrangement is somewhat blasé, the guitar solo, which combines jangly clean lines with walls of fuzzed out madness, saves this song from being overly mundane.

Steely Dan: “I Got the News” is certainly one of the funkiest tracks on the record and one could easily imagine a deleted club scene in Boogie Nights where this song is playing.

The Darcys: Continuing with the overall dark interpretation of the Aja tracks, “I Got the News” brings a Johnny Greenwood-esque vibe to the guitar lines, while the electronic elements help give it an overall OK Computer vibe.

Steely Dan: You’ve gotta love albums with songs titles of multiple girls’ names. Given that there are only seven tracks on the LP, you have to laugh.

Released as the third single in 1978, this easy listening gem performed modestly and peaked at #44 on Billboard, however it is probably the standout track on Aja. Donald Fagen’s soulful crooning are bone chilling while the funk guitar licks are shagadelic. Aja certainly has one of the cleanest productions in pop music, but it’s on “Josie” that you really hear it. Vocals, guitar licks, and horn sections are so clean you could eat off them.

The Darcys: The Darcys add some grit to their take on this one and end their interpretation of Aja with undoubtedly their best song of the bunch. Jason Couse’s vocals sounding like he’d gargled a pint of gasoline with a side of razor blades, coming out sounding more like Closing Time era Tom Waits than himself. If the other tracks on the 2012 remake make a drastic departure from the original, this is even more radical.

As a child growing up in the suburbs, Ryan found music as a way to soothe his boredom. After first hearing AC/DC at the age of 10, he was hooked on music. Tracing its roots to the ‘50s, he became obsessed with Elvis, Buddy Holly and Chuck Berry. Somehow that led to grunge, then psych-rock, then jazz, etc. The list goes on and on and his collection of vinyl records continues to grow.
RELATED ARTICLES
donald fagenfeaturesjason couse

by SPILL NEWS on September 3, 2017
WALTER BECKER OF STEELY DAN HAS PASSED AWAY AT AGE 67 There are very few details at this time but it was announced via Becker’s official website earlier today. Becker was [...]
9.0