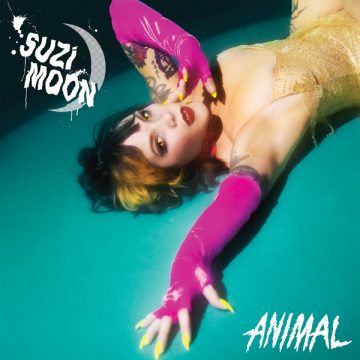 Rising punk sensation Suzi Moon has returned with her second EP, Animal. Not only is this her first collection of music since her 2021 debut, Call The Shots, but the three-track EP also follows recent singles “Gold Record Autograph” and “Animal”, both released this year. With the addition of a third track, Moon has found her sound in a vein inspired by The Stooges and The Runaways.

Pulling back on the tempo, the title track, “Animal” is a dark and haunting SONG with a moody verse that grows an absolute monster of a chorus. The hard-hitting song is accented by a simple guitar solo while Moon’s vocals shine for the sheer versatility and range demonstrated – from a raspy and sultry baritone to throat wrenching howls – all within seconds. Without a doubt, “Animal” is the strongest track Moon has delivered on her EP. Closing the EP with “Gold Record Autograph”, Moon once again showcases a different side to her as both a songwriter and performer. Still upbeat and featuring the crisp tone of an overdriven guitar, “Gold Record Autograph” is far more melodic and groovy.

With only three songs, Moon has delivered a raw and untamed performance reminiscent of ‘70s punk rock. Animal is a peerless record among today’s punk scene. Without teetering towards metal or pop, Moon has established herself as perhaps the most vital punk artist in sometime by bringing the genre back to its unapologetic roots. As a result, Animal is a strong showcase of Moon’s songwriting and her powerful vocals as she reminds listeners that punk rock is as much about the sheer attitude as it is the music.

A passion for music has always been a part of Gerrod’s life. As a young boy, he was raised on a steady diet of the music from The Chili Peppers, Aerosmith, The Stones, Prince, and others from his mum. Raised in the GTA, Gerrod continued to foster his love for music by attending a wide range of concerts and learning the drums. His unapologetic passion for music has no bounds and has spread to a wide variety of styles, whether it be the 90’s rock that sound tracked his teenage years, the jazz he studied in university, or his newfound love for hip-hop. He recently received his bachelors in music and education from York University and is passionate about writing and reviewing good (and less than good) music. Gerrod is also the drummer and songwriter for a Toronto based rock & roll band, One In The Chamber.
RELATED ARTICLES
album reviewalbum reviewspirates press records
8.0