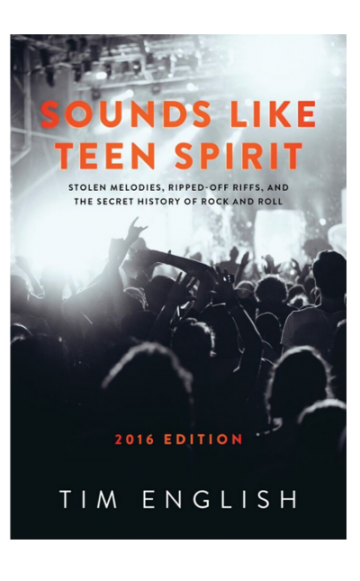 Music plagiarism cases continue to pop up all over the news, the latest being Lady Gaga’s multi-million dollar battle. Before that there was Sam Smith, Robin Thicke, even America’s sweetheart Taylor Swift hasn’t escaped unscathed. The truth is, these cases have been around for a very long time and chances are your favorite artist hasn’t escaped, either.

In fact, there’s a lot that would surprise you about the history of popular music as well as what, and who, influences creative artists. This and more is explored in the brand new 2016 edition of Sounds Like Teen Spirit: Stolen Melodies, Ripped-Off Riffs, and the Secret History of Rock and Roll by Tim English. Readers will experience many “Aha!” moments as they discover songs that appear to have “borrowed” their melodies, including but not nearly limited to the Beach Boys “Surfin’ USA,” The Rolling Stones “The Last Time,” Radiohead’s “Creep,” Robin Thicke’s “Blurred Lines,” and Sam Smith’s “Stay With Me.”

The fun won’t stop there, though – English dives into the secret history of rock and roll, revealing the often-shocking influences of favorite artists. Did you know, for example, that Nirvana’s “Smells Like Teen Spirit” is loosely based on Boston’s “More Than a Feeling?” No music fan will come away from reading this new edition of Sounds Like Teen Spirit without hearing familiar music in an entirely new way.

Among the discoveries English shares:

– An impressive list of familiar songs and their real origins
– The songs that influenced the work of favorite artists such as the Beatles, Bob Dylan, and Led Zeppelin and many more
– The “secret history” of how many songs were copied – consciously or not – from earlier songs
– How musical “borrowing” has often allowed well-known artists to achieve their career breakthroughs
– The fascinating oral tradition of music that involved borrowing and re-writing, and how its clashed with modern legalities

Tim English is a recognized authority on the topic of musical plagiarism in pop music. He has appeared on hundreds of radio programs in the U.S. U.K. and Canada. He is the winner of Independent Publisher’s “Bronze Medal” for one of the best books of the year.

He is also the author of Popology: The Music of the Era in the Lives of Four Icons of the 1960s which examines the role of music in the lives of John and Robert Kennedy, Martin Luther King, and Thomas Merton.

The Spill Magazine is a Toronto-based online publication dedicated to covering the independent music scene with a strong focus on our thriving hometown talent. Our writers bring you up-to-date news, in-depth features on musicians and reviews for the latest CD releases. We also travel to the front lines for all local festivals including Canadian Music Week and North by Northeast. Don’t forget to check out our Facebook and Twitter pages for all daily Spill updates.
RELATED ARTICLES
bookssmells like teen spirit