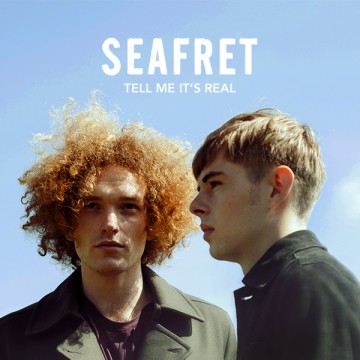 British acoustic duo Seafret has been building steady momentum overseas, where their two EPs have garnered a significant UK fan base. Riding off the success of Ed Sheeran and Passenger, the duo is determined to make honest music that has every right to play on the radio between two overproduced pop songs.

With their debut record Tell Me It’s Real, Seafret manages to achieve this. The album contains 13 pieces of conscientious, genuine music that naturally evoke emotion through seeming simplicities. From the opener, “Missing,” Seafret introduces themes of relationships, longing, and love, which steadily last throughout the record. The album is tonally a coming-of-age story, reflecting experiences associated with first loves, expertly handled on the single “Wildfire,” and first heartbreaks, totally encompassed by “Atlantis.” The latter track takes claim as the record’s finest, swooning with calming guitar plucks doused in emotionally raw words. This rawness is a persistent presence on Tell Me It’s Real, reflected on its title track, where singer Jack Sedman’s vulnerable voice calls “I really don’t mind if you have to leave my side/cause I’ve been made to walk alone all the way through my life.” It truly is Sedman’s croon that sets the tone for most tracks, complementing Harry Draper’s plucking so well that the two craft layered melodies with minimal resources.

Their forte may be slower songs, but even on more upbeat fares they succeed marvelously. Rocker “Be There” gains its appeal from a percussive chorus. Then there’s “Over,” which will no doubt garner some Mumford and Sons comparisons, but is confidently stamped with Seafret’s signature. Near the end of the record, “Beauty on the Breeze” and “Skimming Stones” keep the vibe lighter with their upbeat, pop-rock radio styling similar to that of The Fray, both showing and promising versatility.

If there’s an area Seafret needs to focus on improving, it would be their lyrical content. While keeping with the theme of the record, a lot of tracks don’t find too many complex ways of saying the same thing. Seafret’s largest challenge moving forward will be to find confident maturity in their words. For now, Sedman’s voice does their songs justice. It’s the genuine emotion he sings with that carries even the simplest of lyrics. And even if they’re only singing about love, they can at least admit it. Near the end of the record, Sedman bellows “Love’s my weakness, but that’s how I choose to be.” In a way, this is Seafret’s mantra, encapsulating Tell Me It’s Real in one simple sentence. Those who seek emotional, singer-songwriter work will be more than satisfied with this effort.

Robert Defina is an avid critic both on paper and in person. He spends more time writing album reviews than he does worrying about his future. He hopes that this sort of procrastination never grows old.
RELATED ARTICLES
album reviewsatlantisoceans
8.0