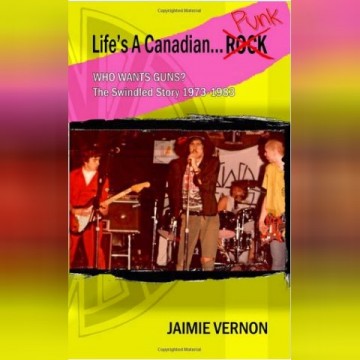 In the 1970s red blooded Canadian boys dreamt of playing hockey in the NHL. For Jaimie Vernon that dream was dashed as a pre-teen due to a near debilitating injury. His parents wanted him to take up a new hobby so they bought him a guitar. It would be the worst thing they could have ever done. ‘Life’s a Canadian Punk – Part 1: Who Wants Guns? The Swindled Story (1973-1983)’ is the first humorous chapter in the life of future Bullseye Records president Jaimie Vernon. It covers his formative years as he struggled to learn to play, the musical influences that drove him – mainly based on the Canadian content being blasted from AM radio speakers – and his first bands: The Gods, The Good Times Roll Band, Elysium Moon, The Swindle and its reconfiguration as short-lived Toronto punk sensations SWindleD. The Toronto music scene was experiencing a Renaissance in the late ’70s and early’80s and Vernon was lucky to have been part of its rebirth. Follow his transformation from angst ridden suburban teen to smart-assed speedcore, four-chord, rhythm guitarist. As both participant and voyeur – and usually the only sober member of most of his various musical pursuits – the tales reveal an honest confessional style and appreciation for the absurd. Meet the characters, the players, the triumphs, the defeats and the bad Alice Cooper make-up in a chronological journey extracted from Vernon’s personal diaries. Never mind the bollocks…this is Canadian (punk) rock up close and pimple-faced.